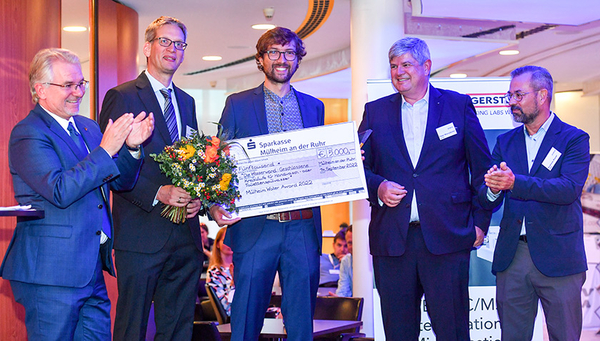 The “Water Wall” developed by Eawag researchers recycles handwashing and toilet flushing water in a closed cycle and can therefore be used in regions with scarce water resources or those without water and wastewater networks. Now the project has been awarded the Mülheim Water Award.

The Mülheim Water Award is an international water prize awarded every two years in the German city of Mülheim an der Ruhr. It recognises practice-oriented research and development projects as well as innovative concepts in the field of drinking water supply and water analysis. This year, innovations were sought for sustainable water management and safe drinking water supply. One of the two award-winning projects was the “Water Wall”. This is already the third time that the Aquatic Research Institute Eawag has won the award, which has been in existence since 2006. On 14 September, environmental engineer Michel Riechmann from the Process Engineering department received the award on behalf of the Eawag Water Wall research team.

The development of the Water Wall began in 2011 as part of the Blue Diversion toilet. In the Water Wall, the wastewater from the toilet (separated from urine and faeces) and the wash basin is cleaned and reused in a large cycle. It thus enables clean and safe sanitation systems even in places where there is no access to the water and wastewater network or where fresh water is scarce. In a further step, the researchers have also decoupled the water treatment module as an independent, mobile handwashing station, optimised it and tested it in field trials.

The recycling of toilet flushing and handwashing water is made possible by a multi-stage purification system:

In an aerated bioreactor, microorganisms first break down organic impurities. The water then flows through an ultra-filtration membrane, which retains pathogens, before an activated carbon filter binds and breaks down turbidity and colourants from the water. In a final treatment step, an electrolysis cell produces chlorine from the salt dissolved in the water, thus disinfecting the water without the need to add chemicals.

The combination of these technologies creates a robust system that requires little maintenance, resources and energy. The research team has tested prototypes of the Water Wall under realistic conditions in several field trials, for example in a public green space in Zurich or in an informal settlement in Durban, South Africa. After this practical test, the researchers have now started to make the system marketable together with industrial partners.

The core element of the handwashing station is the water module from the Blue Diversion Autarky Project. (Photo: Autarky, Eawag)