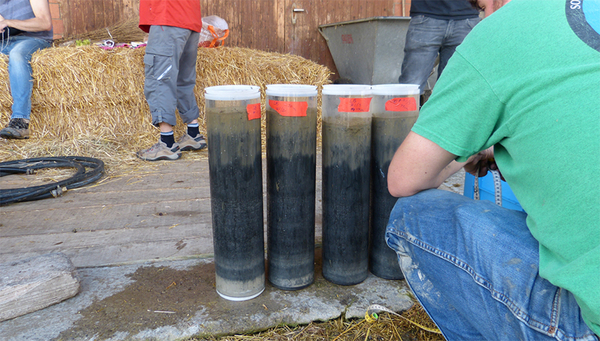 Whether a lake was once polluted with excess nutrients is reflected even decades later in the community of bacteria living on these nutrients in the sediment. However, there is still surprisingly little research into how microbes in the sediment cooperate.

From a global perspective, lake sediments are important carbon sinks. Carbon that was once present as CO2 in air is bound within organic matter and then deposited on the bottom of lakes, for example in the form of dead algae or foliage that has been swept into the water. However, when bacteria or archaea “feed” on this carbon, they also consume oxygen – in some cases, so much oxygen that it is in short supply for other organisms at the bottom of the lake. As a result, species of fish that rely on deep spawning areas have died out in over-fertilised lakes.

The type and quantity of organic matter are important

The fate of carbon in lake sediments depends on the microorganisms present. Unlike for marine environments, however, there has so far been little research into the cooperation between microorganisms in lake sediments. Now, a joint study by ETH Zurich and the Swiss Federal Institute of Aquatic Science and Technology (Eawag) has revealed that this community is heavily influenced by the type and quantity of organic matter deposited. Changes in the input of terrestrial organic matter and in the composition of phytoplankton in the lakes have brought about a lasting change in the composition of organic matter in the sediment. As a result, anthropogenic over-fertilisation – particularly between 1950 and 1970 – continues to influence the microbiology of the sediment even today. The researchers have studied this effect based on biomarkers and the respiration of sediment microbes in five Swiss lakes, from the oligotrophic Lake Lucerne, which has low levels of nutrients, to the moderately affected Lake Zurich and the eutrophic conditions in Lake Zug, Lake Greifen and Lake Baldegg.

Overall, there is no clear difference in bacterial biodiversity between the lakes. There is, however, a strong variation from lake to lake in terms of the dominant species, which vary according to the conditions in which the sediments were formed. Indeed, the differences stemming from periods of intensive over-fertilisation are still in evidence today. It was only in the old, deeper sediment layers deposited prior to eutrophication that the researchers did not encounter this distinction. This observation suggests that all five lakes still had a similar bacterial community structure at that time.

Interestingly, the patterns seen with dominant species of bacteria are not repeated with archaea, whose communities only vary in the more recent deposits. According to Mark Lever from the Department of Environmental Systems Science at ETH Zurich, who is the study’s corresponding author, this might be an indication of how organic matter is broken down in the sediment: it may be that bacteria perform the first, decisive steps, whereas archaea primarily feed on intermediates produced by the bacteria. These intermediates – formed, for example, by fermentation – are considered to be universal and are therefore less dependent on the composition of the organic matter.

Eutrophication as a driver of microbial community structure in lake sediments

Lake sediments are globally important carbon sinks. Although the fate of organic carbon in lake sediments depends significantly on microorganisms, only few studies have investigated controls on lake sedimentary microbial communities. Here we investigate the impact of anthropogenic eutrophication, which affects redox chemistry and organic matter (OM) sources in sediments, on microbial communities across five lakes in central Switzerland. Lipid biomarkers and distributions of microbial respiration reactions indicate strong increases in aquatic OM contributions and microbial activity with increasing trophic state. Across all lakes, 16S rRNA genes analyses indicate similar depth‐dependent zonations at the phylum‐ and class‐level that follow vertical distributions of OM sources and respiration reactions. Yet, there are notable differences, such as higher abundances of nitrifying Bacteria and Archaea in an oligotrophic lake. Furthermore, analyses at the order‐level and below suggest that changes in OM sources due to eutrophication cause permanent changes in bacterial community structure. By contrast, archaeal communities are differentiated according to trophic state in recently deposited layers, but converge in older sediments deposited under different trophic regimes. Our study indicates an important role for trophic state in driving lacustrine sediment microbial communities and reveals fundamental differences in the temporal responses of sediment Bacteria and Archaea to eutrophication.
See DOI
See Institutional Repository
Han, X.; Schubert, C. J.; Fiskal, A.; Dubois, N.; Lever, M. A. (2020) Eutrophication as a driver of microbial community structure in lake sediments, Environmental Microbiology, 22(8), 3446-3462, doi:10.1111/1462-2920.15115, Institutional Repository

A rapid journey into the depths with the sediment corer