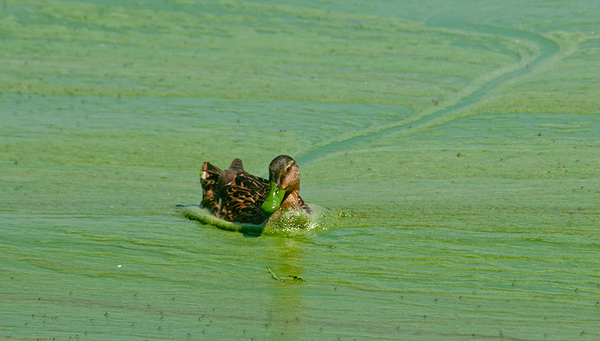 In the past, Lakes Zurich and Greifen have repeatedly been affected by blooms of potentially toxic cyanobacteria. This was confirmed by an analysis of sedimentary DNA carried out by Eawag scientists.
By Martina Schürmann

Over the past century, cyanobacterial blooms – which impair water quality – have repeatedly occurred in lakes around the world, including Lakes Zurich and Greifen in Switzerland. Bloom formation is promoted by eutrophic conditions and high water temperatures. Certain species of cyanobacteria (also known as blue-green algae) produce toxins such as microcystins, which can cause liver damage. Even in the absence of toxins, high concentrations of cyanobacterial cells can lead to allergic reactions, skin rashes or diarrhoea in people with sensitive skin, children or dogs.

The availability of long-term data on the abundance and diversity of cyanobacterial populations in lakes has been limited to date. Since 1974, Eawag has been monitoring the phytoplankton community in Lake Greifen on a regular basis by microscopic analysis of water samples collected every month. Monthly sampling has also been carried out in Lake Zurich, by the Zurich water utility (WVZ), since 1976. To look further into the past and gain a better understanding of how and under what conditions cyanobacterial blooms are formed, Marie-Eve Monchamp and her colleagues in the Aquatic Ecology Department have now studied DNA isolated from the sediments of the two lakes.

Sediment cores 63 millimetres in diameter and 1 metre long were collected from the deepest part of Lake Greifen (32 metres) and at a depth of 98 metres in lower Lake Zurich. In the laboratory, DNA was extracted from the sediments deposited over the past 200 years and then sequenced. Using relatively large (400-nucleotide-long) DNA fragments, the scientists were able not only to identify cyanobacterial species but also to investigate the phylogenetic diversity of entire cyanobacterial communities.

To validate the method, the results of the DNA analysis were compared with the species richness data obtained from water samples analysed by microscopy over the past 40 years. Marie-Eve Monchamp says: “There is excellent agreement between the findings of the two approaches for this period, and the statistical analysis shows a strong and significant relationship.” Greater cyanobacterial richness was observed in the sediments; according to Monchamp, this can be partly explained by the fact that many cyanobacterial species are difficult to distinguish microscopically and diversity thus tends to be underestimated in water samples.

A further aim of the study was to determine whether the sediments also contain DNA from cyanobacteria that can produce toxins. In Lake Greifen, genes from a potentially toxic species were found in the sediment layers from 2006, 2009, 2011 and 2012 (Fig. 3), reflecting the fact that regular blooms of Microcystis aeruginosa have been reported in this lake over the past 15 years.

Fig. 3. Sediments deposited over the past 100 years are visible in the upper 40 cm sections of cores retrieved from Lakes Greifen (A) and Zurich (B). The arrows indicate the depths at which DNA samples were collected. Red signifies the detection of genes from toxic cyanobacteria.

In Lake Zurich, genes confirming the presence of potentially toxic cyanobacteria were detected in 13 layers (between 1912 and 1962 and between 1993 und 2010) (Fig. 3). These results are also consistent with existing records. A recent study shows that the toxic genotype of Planktothrix rubescens constituted almost 100% of the lake’s phytoplankton over almost 30 years. Large reddish blooms of P. rubescens were reported on the surface of Lake Zurich as early as 1897.

While analysis of sedimentary DNA can be used to demonstrate the presence of particular species, it cannot provide reliable estimates of population size. Monchamp explains: “Gene sequencing can introduce biases leading to inaccurate population data. In addition, the proportion of phytoplankton cells that can be found in the sediments depends on local phenomena such as water currents. More analyses are required to reconstruct the size of cyanobacterial populations from sedimentary archives.”

Melainabacteria detected in lakes for the first time

DNA sequencing also revealed the presence of Melainabacteria in the sediments of the two lakes. This newly characterised lineage shares common ancestry with cyanobacteria. Melainabacteria have been detected in groundwater, drinking water and wastewater treatment plants, but they have not previously been reported in lakes. The results of the DNA analysis do not indicate whether these non-photosynthetic cyanobacteria live in the water column or colonize the sediments, but the contrasting diversity in the two lakes may reflect their adaptation to specific local conditions. According to Monchamp, this finding also shows that sedimentary DNA analysis is suitable for studying not only cyanobacteria but also less well known planktonic organisms. She concludes: “Using the knowledge we’ve gained, we now intend to investigate how environmental changes affect lake ecology and cyanobacterial communities, so as to improve our predictive ability for the future and potentially help to protect ecosystems.”