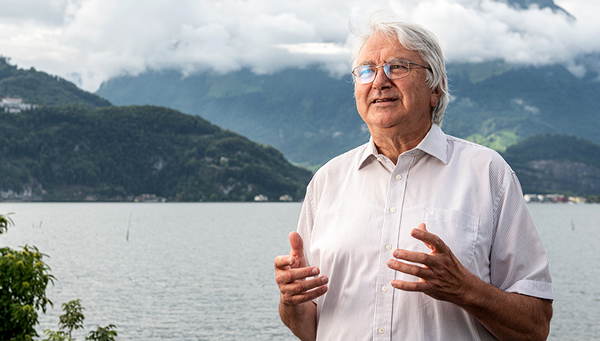 In official circles, he is known as Prof. Dr. Alfred Wüest. But his fellow researchers and colleagues, simply call him Johny. When he came to Eawag in 1983, no one imagined the formative influence Johny Wüest would have on the research institute, but above all on the many people who have worked with him over the years.

It was a phone call that changed everything: “I wanted to know more about environmental sciences and about changes towards a ‘long-term future’, so I called Eawag, where I was put through to Dieter Imboden, who accepted me as a post-doctoral student at the ETH Zurich” says Johny about his start at Eawag. He then adds mischievously: “The term ‘sustainable’ was not in vogue yet in the early 1980s.”

Today, 38 years after that phone call, Johny has left a formative impression, and not only through his outstanding research achievements, but above all as a person. If you ask his colleagues and his decades-long companions, the statements repeat themselves quite clearly: Johny is a full-blooded researcher always driven by his curiosity and passion for science. He never tired of standing up for his ideas, convictions and values and was not afraid to question critically or sometimes uncomfortably. Yet he always remained fair and down-to-earth, closely rooted to his home canton of Lucerne and cosmopolitan at the same time.

Specialisation of science and overarching issues

If you ask him what excited him about research over all these years, his answer is surprisingly simple: “In the early 1980s, polluted waters were a daily topic and I was motivated by the fact that the research questions were so closely tied to real problems. Environmental politics were also awakening at that time, which made environmental research exciting."

His enthusiasm persists to this day and has kept Johny looking at research holistically all these years: “Environmental research always happens in a social context and not as an end in itself,” he is convinced. And he has worked for this not only in his home country, but also far beyond its borders. Seeing the context, whether it is on a social or political level, in Switzerland or in his international projects. “Research in an ivory tower cannot work”. With this conviction, he shaped Eawag internally but also externally, as Johny Wüest was often committed to ensuring that the relevance and context of Eawag research was perceived and understood.

In this context, he also sees the impressive period of Eawag’s reorganisation at the end of the 1990s, which still evokes memories today. At that time, too, it was about the tension between the specialisation of science and the overarching issues. Something that, according to Johny, is repeating itself with the recent sustainability debate: “I would like to see research face up to this discussion and question the pursuit of publications. The fact that the younger generation in particular is asking critical questions will also be useful to Eawag as a national research institute, because we must not lose sight through specialisation of the overarching objectives that are important for Switzerland, Europe and the world.”

“Rather proud of that”

If one wanted to list all of Johny Wüest’s professional positions and scientific achievements, it would take considerably more room. Nevertheless, Johny mentions a few successes of which he is “rather proud”. For example, the combination of research and consultancy at Lake Kivu, where the objective was to understand the accumulation of methane and carbon dioxide that continues to spread fear in memory of the deadly Nyos eruption of 1986. The various projects of the Swiss National Science Foundation and Federal Department of Foreign Affairs that he was able to carry out with his Eawag colleague Martin Schmid are probably among the most detailed studies ever conducted on a single lake and have resulted in expertise documented in over 20 publications. "Many years of consulting for the government of Rwanda and the first large-scale methane mining project, KivuWatt, also opened my eyes to the political complexity in a development context,” Johny explains today.

His most intense experiences included working in Russia, where he felt a deep divide between institutional and political deficits and cooperative, collegial and competent collaboration with academic colleagues. In Russia, together with Eawag researchers Michael Sturm, Michael Schurter and Martin Schmid, he was able to make some spectacular observations of deep water formation on Lake Baikal in winter, when strong winds led to nearshore subsidence, causing the thermobaric stratification to tunnel.

Johny’s work on the encounter between ecology and energy included the Lake Brienz Project, where he was able to lead a team of researchers and practitioners together with Markus Zeh, Office of Water Protection and Waste Management of the Canton of Bern, to get to the root of changes in the nutrient/production regime and turbidity as well as the effect of pumped storage power plants. A real interdisciplinary highlight was the project at Lake Cadagno in Ticino, where, under the direction of Tobias Sommer, half of the Surface Waters Department and an international group of researchers were able to mobilise to find out from the Chromatium Okenii bacteria whether they are capable of mechanically mixing entire layers of water.

The list could go on to include numerous other exciting projects and research work, but it must include the LéXPLORE research platform, to whose success Johny made a significant contribution. Thanks in part to his commitment, the floating laboratory was able to begin its work on Lake Geneva in February 2019. “I am proud that we have succeeded in bringing together all the limnologically interested university institutes around the lake and convincing them of LéXPLORE,” Johny says, underlining the importance of the platform, which can now be used to study processes in a large lake in a densely populated region. Currently, around 30 projects are under way there - from the occurrence of the Quagga mussel to contamination with microplastics.

Off into the fresh air or off to the Eastern Congo?

Those who know Johny know that there is no risk of boredom and no hasty acts. Curious and open as he is, he looks forward to new paths, be it hiking or cycling, to discover new landscapes and ecosystems in the fresh air. And if the one or other path leads him to a friendly pub that is new to him, even better. “I will now also find more time for the football stadiums and for local cultural history,” Johny is sure. He does not want to plan anything concrete yet and is deliberately taking one year at a time. But he has expressed his desire to visit the Eastern Congo with his wife over the winter to support students at the university in Bukavu. But due to the pandemic, this plan is unfortunately still on hold - we will have to wait and see. Will he miss Eawag? “Yes, of course, but I know that my colleagues are ready to continue the work in a more modern and efficient way. So it’s very easy to let go.”

Prof. Dr. Alfred Wüest began his career at Eawag in 1983. After studying particle physics at the University of Zurich and completing a postgraduate degree in “Sanitary Engineering and Water Protection” at Eawag, Johny Wüest obtained his doctorate in 1987 in the group led by Prof. D.M. Imboden at ETH/Eawag. Returning from his post-doctoral stay in the USA, he joined the Environmental Physics Department as a group leader and later the Applied Water Ecology and Surface Waters Departments, which he headed for six years from 2000 and 2006 respectively. From 2015 to March 2021, he was a committed member of the Eawag Directorate, where he represented Eawag Kastanienbaum and acted as a liaison with the EPFL. He also represented Eawag’s efforts to give more weight to environmental practice, such as energy-related research. Since 2002, he has been a titular professor of Aquatic Physics in the Department of Environmental Systems Science at the ETH Zurich. In 2012, Johny Wüest became a full professor of Physics of Aquatic Systems (Margaretha-Kamprad Chair) in Environmental Engineering and he has been head of the Centre for Limnology at EPF Lausanne since 2013.

The environmental physicist researched mixing processes and biogeochemical material fluxes in lakes and taught environmental fluid mechanics in an international team. In dozens of consulting projects, he supported cantonal agencies in collaboration with Eawag researchers and represented Eawag on various expert committees. He was on the management committee for the Competence Centre Environment and Sustainability of the ETH Domain (CCES) and worked under the direction of Bernhard Wehrli (Eawag, ETH Zürich) on studies for integral water management in the Zambesi catchment area - also on-site in Lusaka for six months.

With his research, he has made a significant difference to limnological research worldwide and is now regarded as one of the most important contributors in the field. Popular with students and a member of various organisations, the visionary researcher and author of numerous publications has contributed enormously to the international reputation of Eawag, EPFL and ETH Zurich.