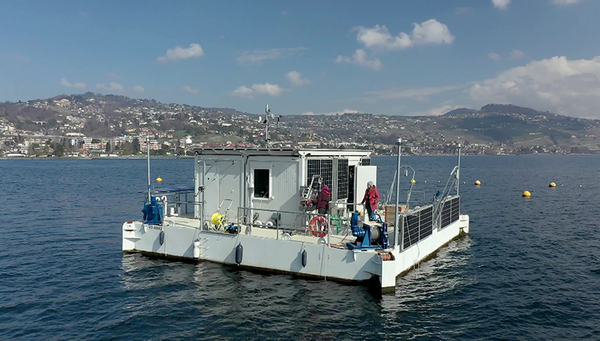 LéXPLORE has been in operation for two and a half years. What has been or is being researched on the platform?

Natacha Tofield-Pasche: There are about 30 projects underway. Some are looking at physical processes, other at chemistry or ecology of the lake. The investigations are very diverse: One team, for example, is researching contamination by microplastics, another the occurrence of quagga mussels, an invasive species of mussel. Five projects are dedicated to the development of new technologies. A group at EPFL, for example, is developing a device that can extract DNA – from bacteria, for example, – from water and sequence it.

Are you personally involved in any of these research projects?

Tofield-Pasche: Yes. I participated in a recently completed project that investigated the primary production, i.e. the biomass production of the lake.

Damien Bouffard: I am currently working on several projects. One of them is investigating the role of surface waves caused by wind on the exchange of CO2 between air and water. In another project, we compare the surface temperature determined by satellites with the water temperature that we measure on site a few centimetres below the lake surface.

Tofield-Pasche: And besides that, you were responsible for the development of the Open Science Platform.

Bouffard: Yes. That’s right, that was also a kind of project. In the meantime, the Open science Platform has become an integral part of LéXPLORE. The idea behind it was to make a range of LéXPLORE measurement data freely available to the research community, but also to the public, on a user-friendly, attractive web platform. For example, the temperature at different lake depths, the oxygen profile of the water or various meteorological measurements such as wind speed. These data provide valuable background information for more specific questions and promote interdisciplinary studies. The objective is that the data platform can be enriched in the longer term with datasets from ongoing research projects.

Natacha Tofield-Pasche, limnologist at EPFL and project leader of LéXPLORE, and Damien Bouffard, researcher at Eawag and member of the LéXPLORE steering committee.

What are the advantages of this floating laboratory compared to the usual measurements from a boat?

Bouffard: Normally you take water samples and then you have quite a bit of stress. Because the samples have to get to the laboratory as quickly as possible so that the biological or chemical processes that you want to study are disturbed as little as possible. We don’t have that problem here: on LéXPLORE we can analyse and evaluate the samples on site.

Tofield-Pasche: Furthermore, the platform allows us to take continuous measurements. The measuring devices record around the clock and in all weathers. For example, we can investigate how various parameters change in the day-night cycle. Or what processes take place during a storm.

There are also floating research stations on other lakes. What makes LéXPLORE unique?

Bouffard: For one thing, the size of the lake. Many platforms are installed on smaller lakes. With LéXPLORE, we can study the processes on a large lake with strong waves and deep water, and which is also located in a densely populated region.

Tofield-Pasche: Another difference is certainly the infrastructure. Other platforms are usually much smaller or consist simply of several buoys with measurement instruments. LéXPLORE, on the other hand, is a real laboratory where 16 people can work at the same time and is equipped with various high-tech instruments.

Bouffard: Because so many different measurements happen at the same time on LéXPLORE, we can compare different processes with each other.

Bouffard: The echo transmitters record when fish pass by in the area of the platform. This fish presence can then be compared, for example, with the water temperature that was measured at that time. Such a combination of different observations opens up whole new possibilities for us to understand lakes better. LéXPLORE thus promotes multi-layered projects and brings together researchers from different disciplines in one laboratory – that’s simply fantastic and a great motivation for me personally. This communal, collaborative aspect is what makes LéXPLORE stand out.

What have been the biggest challenges so far?

Tofield-Pasche: First of all the project itself, that we were able to realise LéXPLORE at all. It took six years from the first discussions until the platform was on the water. There were always voices that said, “forget it, it won’t work”. The population and the sailing club of the neighbouring municipality of Pully were also critical of the project at the beginning. Overcoming this opposition and not getting discouraged was certainly a challenge.

Bouffard: I think Johny Wüest deserves most of the credit for that. Until recently, he was a member of the Eawag Directorate and is a professor at the EPFL. LéXPLORE was his idea - even if he would never claim the credit for himself. He initiated the project and doggedly pursued it.

Tofield-Pasche: Yes, absolutely. Johny Wüest was the driving force behind LéXPLORE. He got the right people on board, never lost his optimism and kept us all motivated. I’m glad that the platform was able to go into operation before his retirement in August. 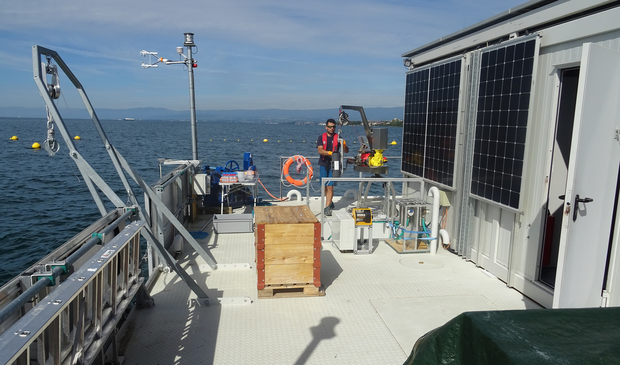 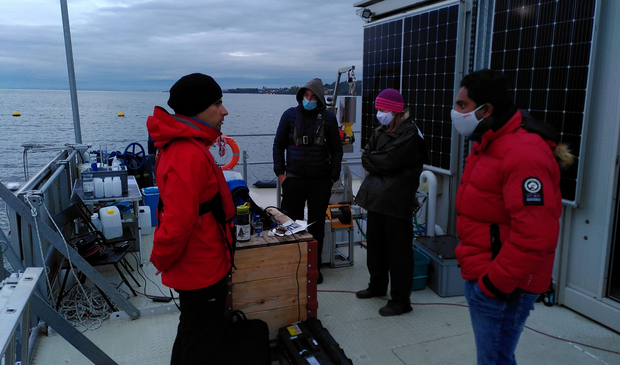 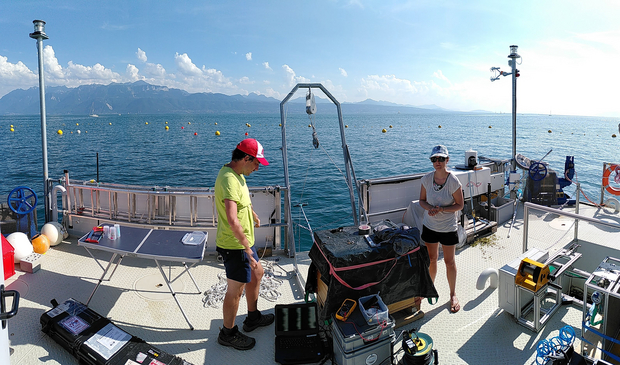 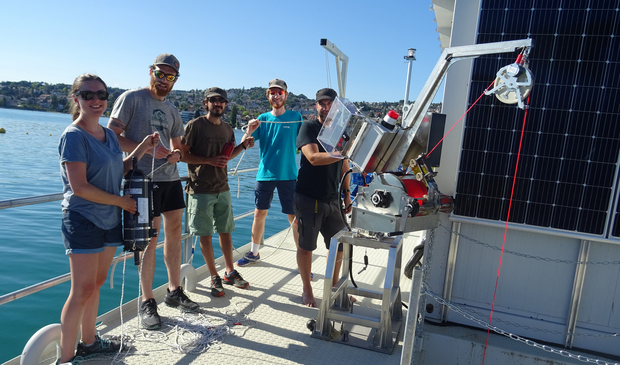 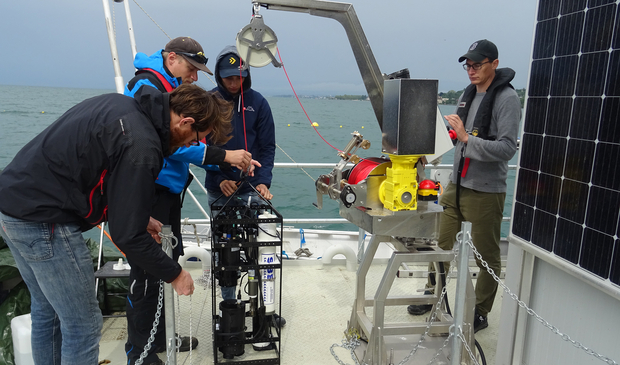 And what were the technical obstacles that had to be overcome?

Tofield-Pasche: Installing the measuring instruments was a challenge. And it still is, because with every new project, new instruments are being added. Our technicians do a great job; they always find new and better solutions.

Bouffard: It happens from time to time that instruments fail. After a storm, for example. So far, however, the platform has withstood storms, even lightning, very well.

Tofield-Pasche: The weather is also critical for the power supply. Because of persistent fog, the solar panels did not supply enough electricity last winter. But then the generator kicked in as planned and ensured the power supply.

You mentioned the resistance from the population. What is the situation now? Has the acceptance level risen?

Tofield-Pasche: Yes. In the meantime, many have noticed that this platform does not disturb the landscape or navigation. Many people now even pilot their boats past the platform to look at it.

Bouffard: What we can learn from this is to get people on board earlier, to explain to them better what we intend to do, why what we are doing is important and of benefit to the general public. Especially with a heavily-used lake like Lake Geneva, for example, findings regarding water quality are of general interest.

Tofield-Pasche: We had actually also planned to conduct a public tour in summer 2019. But we had to cancel it because of bad weather. And then Covid came in 2020. We very much hope that we will be able to offer such a tour twice a year from 2022 onwards.

Has LéXPLORE met your expectations in the first two and a half years?

Tofield-Pasche: Definitely. I am surprised at how many projects are already running. And that’s despite the fact that because of the pandemic, only research teams from Switzerland and France are active on the platform. We hope that international collaborations will also be possible soon.

Bouffard: LéXPLORE has exceeded my expectations. I really appreciate the collaboration and exchange with researchers from different disciplines. This is how new ideas are born.

The plan is for LéXPLORE to stay in operation until 2026. Is there any chance of using the platform in the longer term?

Tofield-Pasche: No, not really. As things stand today, we will have to dismantle the platform again in 2026 because the usage permit for this area of the lake will then expire.

Bouffard: We planned from the beginning that the platform would not be permanent. Sometimes it is good to have a deadline. So now we are using the platform all the more intensively and motivated.

LéXPLORE is a joint project of the aquatic research institute Eawag, EPFL, the Universities of Geneva and Lausanne and the French research centre CARRTEL. The floating laboratory on Lake Geneva is 100 square metres in size. Various processes in the lake are studied all round, over an area of 15,000 square metres and to a depth of 110 metres.