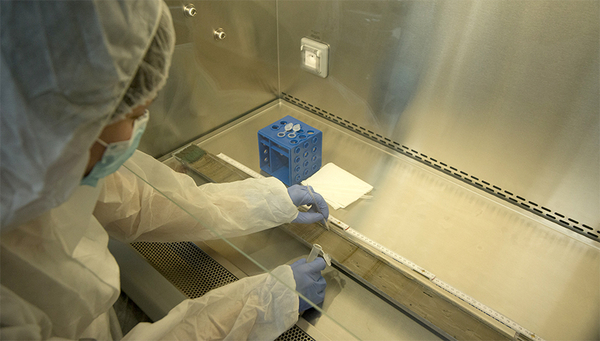 The composition of cyanobacterial communities in peri-alpine lakes has become increasingly similar over the past century. Climate warming and a period of eutrophication have favoured in particular potentially toxic species which can adapt rapidly to environmental changes. These are the findings of an Eawag-led study analysing DNA extracted from sediment cores.

Cyanobacteria – also known as blue-green algae – are adaptable organisms which lie at the bottom of the food chain in lakes. Around a century ago, each lake had its own characteristic cyanobacterial assemblage. Now, according to a study by Swiss and French researchers published today in Nature Ecology & Evolution, the differences between lakes are becoming less marked – from Lake Constance to Lake Geneva, and from Hallwilersee to Lago Maggiore.

In the study, using cores retrieved from 10 peri-alpine lakes, the scientists investigated cyanobacterial DNA from dated sediment layers. Statistical analysis of the data revealed that community composition has become increasingly uniform across all lakes over the past century, even though the number of genetically differentiable “species” has increased in some lakes. Since the 1950s, the proportion of species groups found in few lakes has declined, while the proportion of common ones (found in many lakes)  has increased fourfold.

Two main factors driving this trend are identified in the study – rising temperatures and the eutrophication experienced by many lakes in the 1960s and 1970s. Higher temperatures lead to longer periods of stable stratification, i.e. a reduction in lake mixing (as warmer, lighter surface water does not sink). In Lake Zurich, for example, this has favoured the dominance of the potentially toxic “Burgundy blood alga” Planktothrix rubescens, whose reddish blooms can pose problems for water suppliers. First author Marie-Eve Monchamp comments: “In general, the beneficiaries of these developments seem to be those species which can actively influence their vertical position in the lake and which need less light to survive – and that includes many toxic species.” Among these – as well as the Burgundy blood alga – are species of the genus Microcystis and the invasive species Dolichospermum lemmermannii. The latter was previously observed mainly in lakes north of the Alps, but is now also spreading in southern lakes.

Interestingly, the homogenization trend is still ongoing despite the reduction in phosphorus concentrations which has occurred since the mid-1970s. The authors attribute this partly to the fact that variation in environmental conditions from one lake to another is also decreasing. There has been a decrease in temperature differences between lakes south and north of the Alps. And, lastly, concentrations of the other important nutrient, nitrogen, have remained at a relatively constant high level since the 1970s.

This study is part of the project «The impact of cyanobacterial blooms triggered by nutrient pollution on aquatic environments in the context of climate change», supported by the Swiss National Science Foundation SNSF (no. 142165).

Prevalence of OTUs (operational taxonomic units) in all lakes between the 1900s and 2015. The gradient of red illustrates the proportion of lakes where each taxon was found at each given period, while the absence of an OTU at a given period is depicted by a white box (graph from the original study). The main invasive species that have spread across the lakes are highlighted in yellow.

Sampling sediment cores from lake Lugano and analysing DNA in the safe lab.

A variety of cyanobacteria: Anabeana, Merismopedia, Microcystis, Planktothrix (from left)