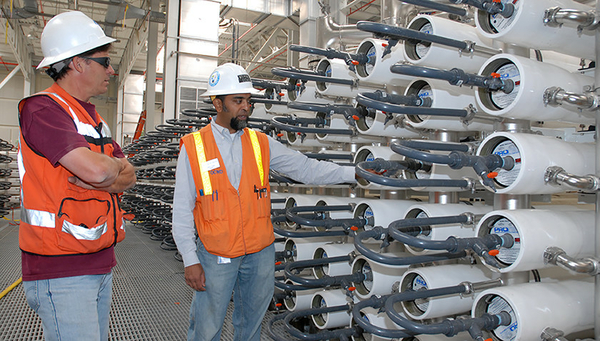 What is required to facilitate the adoption of new technologies such as potable water reuse? According to a study carried out by environmental social scientists in California, users need to see not only how an innovation benefits them personally, but also that it is compatible the community’s values and can become a routine part of daily life. By Andres Jordi

For water utilities in many parts of California – a region suffering from chronic water scarcity – the introduction of potable water reuse has proved to be a hard sell: innovative systems enabling drinking water to be obtained from reclaimed wastewater have met with widespread scepticism. Although the technology is safe and proven, and the treated water meets quality standards, numerous projects have foundered on public opposition. Why is this? According to Bernhard Truffer, an environmental social scientist at Eawag, “Many engineers and scientists still believe that people will accept a new technology as long as you give them sufficient information, but usually it takes more than just public education and marketing.”

What it takes to gain acceptance for potable water reuse is shown by the case of the Orange County Water District (OCWD) utility in California. This agency has been operating a state-of-the-art groundwater replenishment system since 2008. Here, conventionally treated wastewater is purified in a three-step process, comprising microfiltration, reverse osmosis and disinfection with ultraviolet light and hydrogen peroxide (Fig. 1). The treated water is then pumped into recharge basins. The OCWD plant produces 265,000 cubic metres of high-quality water per day, meeting the needs of around 600,000 people.

Together with colleagues at the University of California at Berkley, Eawag scientists Bernhard Truffer and Christian Binz investigated how the strategy pursued by OCWD differed from cases where the implementation of potable water reuse projects failed. The study involved in-depth interviews with stakeholders, including utility managers and executives, public relations consultants, regulators, academics and engineering consultants. Ultimately, the success of OCWD was found to be explicable in terms of legitimacy, a key concept in sociology and innovation studies. Public acceptance of an innovation is thus based on three fundamental factors: users must be able to perceive the direct benefits it offers, its compatibility with societal values and its potential to become a routine part of daily life. An organization seeking legitimation for the introduction of a new technology must ensure that its strategy addresses all three types of legitimacy (Fig. 2).

This was found to be the case with OCWD. For example, the water utility invested considerable time and resources in education campaigns. In over 1200 presentations, it informed the community about the benefits of potable water reuse – in particular, how the new technology would guarantee a safe, reliable water supply into the future. It communicated in comprehensible language adapted to the target groups, with information not only provided in English, but also translated into Spanish, Vietnamese and Chinese. As Truffer points out, “By becoming personally involved in outreach campaigns, OCWD managers established themselves with members of the public as trustworthy and competent experts.” Citizens were also able to express their wishes and concerns through representatives on the project’s advisory board. Their feedback was incorporated into project planning and implementation.

Fig. 2: The legitimacy of a new technology is evaluated on three different levels, all of which need to be addressed if the technology is to be successfully introduced. The legitimation strategy employed will vary depending on the context (region, culture, etc.) and target group (users, policymakers, associations, etc.) (Graphic: Peter Penicka)

Quality, transparency – and the right choice of name

OCWD’s position was further strengthened by its long experience in the water sector, with a 30‑year track record of safe and reliable operations. Truffer observes: “Because of the organization’s good reputation, the community had faith in its capacity to conduct potable water reuse responsibly.” Another measure inspiring confidence was the utility’s adoption of testing procedures going beyond regulatory requirements. At its state-of-the-art on-site water quality laboratory, OCWD monitors for 335 chemicals (only 122 are prescribed by law). In addition, it developed standard operating procedures and protocols for emergency intervention. The facility offered regular tours for the public, giving residents an insight into OCWD’s 24/7 water treatment operations.

Thanks to its transparent communication strategy, OCWD managed to enhance its reputation as a trustworthy and competent organization even in a crisis situation. In 2000, the utility discovered that small amounts of N-nitrosodimethylamine – a carcinogenic compound – were being produced as a by-product of a treatment process. Rather than waiting until the issue was resolved, OCWD informed the media immediately and explained how the problem would be addressed. Truffer comments: “This proactive approach was very well received by the public.” In the newspapers, the episode was described, not as a threat to public health, but as a minor incident which was in the process of being fixed.

According to the study, public attitudes were also favourably affected by the choice of name – groundwater replenishment system (Fig. 3). Rather than suggesting a new, unfamiliar technology, this name led the public to associate potable water reuse with the practice of adding freshwater to groundwater so as to prevent saltwater intrusion into the aquifer – which OCWD had already been doing for decades. In addition, by consistently using the term “water recycling”, OCWD linked the technology to an idea which was already taken for granted by most people in their daily lives. Consequently, environmental groups were among the first to support the new system.

OCWD’s painstaking efforts to legitimize the treatment system were rewarded with a high degree of legitimacy among the public. In contrast, as Truffer notes, “The failed projects’ strategies did not address all the dimensions of the legitimacy concept, and there was considerable opposition as a result.” In some cases, the public was not sufficiently involved in planning and decision-making. In other projects, procedural standards were inadequate, there was a lack of knowledgeable spokespersons, or the public did not trust the operator’s intentions. Sometimes, inappropriate choices were made: for example, one utility advertised its potable reuse project as a wastewater management strategy rather than as a means of improving drinking water supplies.

The environmental social scientists emphasize that a comprehensive legitimation strategy is not in itself sufficient to guarantee success. “In a given context,” says Truffer, “certain projects may not be legitimate.” However, the legitimacy framework does indicate what is needed, in addition to sound technology, in order to gain public acceptance. At the same time, a successful strategy cannot be directly applied to other projects or stakeholders. Instead, a legitimation strategy needs to be developed in the light of the specific culture, values and history of a region or target group. Truffer concludes: “The authenticity of a project and its initiators seems to me to be one of the most important criteria for a high level of credibility.” The example of OWCD also shows that legitimacy cannot be established overnight, but is a long-term process: “Quick, poorly thought-out marketing campaigns are not advisable and can undermine the foundations for successful implementation.”

Fig. 1: Potable water reuse has been implemented at the Orange County Water District utility in California. This project, unlike others elsewhere in the state, did not encounter public opposition. Pictured here: the reverse osmosis system. (Photo: OCWD)