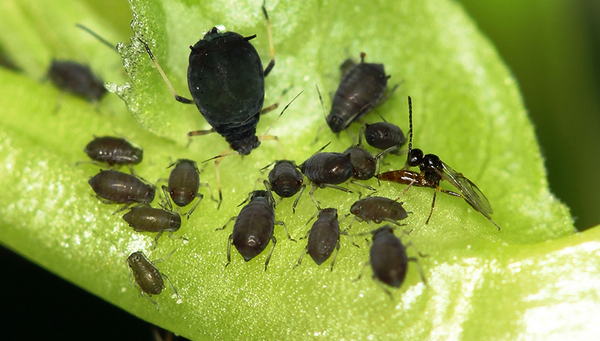 Microorganisms that live in symbiosis can sabotage biological methods of pest control by protecting their host from attackers, and host organisms can even pass on these beneficial “passengers” to their offspring. This phenomenon is one which has been paid little attention to date, but thanks to new research findings measures can now be taken to counteract it.

The continual arms race between host and parasite is a popular focus of research in the field of evolution. Christoph Vorburger is one such researcher working in this area in the Department of Aquatic Ecology at Eawag and at ETH Zurich’s Institute for Integrative Biology. Together with his colleague Steve Perlman from the University of Victoria in Canada, he has highlighted the limitations of many of the previous studies undertaken: “The studies or experiments have often only been two-dimensional. Whether or not a host plant or animal is able to ward off a pest efficiently depends not only on the immune system of the affected organism, but also on third and fourth-party organisms. More and more organisms are being discovered that, as beneficial symbionts, help their hosts to control their enemies, or that the assist the parasites in evading clever defences”, says Vorburger.

One example of this is the interplay between tiny wasps and aphids. The wasps are reared as the natural enemies of aphids and released in greenhouses in order to protect the crops from aphid infestation. Aphids feed on plant sap and are one of the most significant agricultural pests worldwide. They cause direct damage to plants as well as acting as vectors of plant diseases, which results in reductions in yield and huge economic impacts. Biological control using wasps is effective up to a point. The female wasp attacks the aphid, injecting an egg into it which then develops into a larva. The larva then devours the living aphid from the inside and pupates within the dead host. In a matter of days, a new wasp emerges from the “mummy” – ready to attack further aphids.

However, some aphids have allies which help them to defend themselves. They carry symbiotic bacteria which make the aphids resistant to the parasitic wasps, as these bacteria produce toxins that kill the eggs or larvae of the parasites. Such bacteria are even passed on from the female aphid to its offspring and so are, in a way, hereditary. This makes aphid populations so resistant that they are able to withstand biological control with parasites – not helpful for a greenhouse farmer.

This effect looks at first glance to be similar to the development of resistance against insecticides. However, unlike insecticides, parasitoids are able to continue evolving. Laboratory investigations have shown that parasite populations are capable of counteradaptation. They can be selected so as to ensure that they are better able to overcome the resistance of the aphid symbionts. Biological pest control can therefore be improved if the parasites released onto the crops possess sufficient genetic diversity to be able to adapt quickly. Parasites can also be selectively reared to ensure that they are already adapted for the protective symbionts. Lastly, pest control can also be enhanced by means of a cleverly-timed combination of parasites and natural enemies that feed on the pests: the parasites act early to prevent aphid populations from becoming too numerous, and then natural enemies are released that eliminate resistant aphids that have evaded control by parasites.

To Vorburger, one thing is clear: “Defence strategies using symbionts have a significant influence on the co-evolution of host and parasite. Until now, not enough consideration has been given to this effect, even though it could have implications in terms of the transmission of pathogens to humans.”

An adult female black bean aphid (Aphis fabae) and several of her clonal offspring under attack a by an ovipositing female of the aphid parasitoid Lysiphlebus fabarum.
(Photo: Christoph Vorburger, Eawag)

The gruesome signs of successful biological control. Remains of black bean aphids (Aphis fabae) that have been successfully parasitized and 'mummified' by parasitoid wasps. The openings in the mummies are exit holes through which the adult wasps emerged after completing their development inside the host aphids.
(Photo: Christoph Vorburger, Eawag)