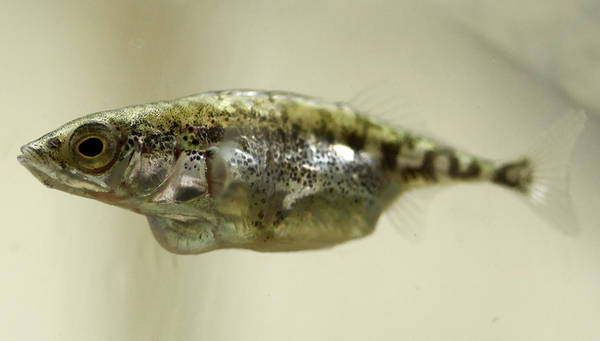 In order to move from one host to another, certain parasites change their behaviour. The more effectively a parasite can manipulate its host, the greater its evolutionary advantage. It therefore passes on its characteristics to its descendants, as a new Eawag study has shown.

Many parasites move from host to host several times during their life cycle, including the parasitic tapeworm Schistocephalus solidus, which infects three hosts altogether. Its life cycle starts in the Cyclops, a small copepod, which feeds on the larvae of the tapeworm. After one to three weeks, the Cyclops has to be ingested by a three-spined stickleback, as the tapeworm larvae need to be inside the latter in order to continue to grow.

However, a Cyclops will normally become immobile as soon as it experiences an imminent threat—a sensible camouflage strategy to avoid being eaten by predators. “As soon as the parasite is mature enough to continue its life cycle in the stickleback, though, the Cyclops actually swims more actively when it encounters the threat stimulus!” says Nina Hafer-Hahmann, a postdoctoral researcher in the Department of Aquatic Ecology, and a specialist in parasite-host interactions. Thanks to this change in behaviour, the Cyclops becomes easy prey for the stickleback which the parasite wants to inhabit.

After several more months, the stickleback then needs to be eaten by a bird, in which the tapeworm will finally reproduce. This kind of interhost migration has been observed by scientists in numerous parasites.

One thing which has been exercising the academic community for some time is whether it is actually the parasite that is pulling the strings of its puppet host, or whether the host changes its behaviour unwittingly in favour of the its freeloading passenger. Biologist Nina Hafer-Hahmann has been getting to the bottom of this question with the help of the tapeworm—considered by researchers to be a model parasite.

In order to find out whether the tapeworms are genetically programmed with a manipulatory characteristic, she replicated the tapeworm’s complete life cycle in the laboratory. Using cameras, she assessed the activity of infected Cyclops when disturbances were spreading through the water. From this, she identified two groups—the less active and the very active Cyclops. She then allowed the tapeworm larvae inhabiting these to mature, and fed the next generation to Cyclops, repeating the process over several generations.

The results showed that the manipulative abilities were inheritable, as the behavioural differences between the less active and very active Cyclops increased with each successive generation throughout the experiment. “The progeny of very manipulative parasites also created significant behavioural change in their hosts”, says Nina Hafer-Hahmann. However, the mechanism behind how the tapeworm larvae manage to cause such a high level of activity in their host is as yet unclear.

Containing malaria and other diseases

There are a great many manipulative parasites, some of which give rise to serious diseases in crops, animals and humans. The mosquito that are infected with the malaria parasite find human scent far more attractive than do uninfected mosquitos. The reason for this is that the parasite Plasmodium falciparum changes its host-mosquito’s sense of smell, thus assisting its own proliferation among humans. “A better understanding of host manipulation could help to eradicate such diseases”, says Hafer-Hahmann.

Host manipulation is a parasite-induced alteration of a host's phenotype that increases parasite fitness. However, if genetically encoded in the parasite, it should be under selection in the parasite. Such host manipulation has often been assumed to be energetically costly, which should restrict its evolution. Evidence of such costs, however, remains elusive. The trophically transmitted cestode Schistocephalus solidus manipulates the activity of its first intermediate copepod host to reduce its predation susceptibility before the parasite is ready for transmission. Thereafter, S. solidus increases host activity to facilitate transmission to its subsequent fish host. I selected S. solidus for or against host manipulation over three generations to investigate the evolvability of manipulation and identify potential trade-offs. Host manipulation responded to selection, confirming that this trait is heritable in the parasite and hence can present an extended phenotype. Changes in host manipulation were not restrained by any obvious costs.
See DOI
See Institutional Repository
Hafer-Hahmann, N. (2019) Experimental evolution of parasitic host manipulation, Proceedings of the Royal Society B: Biological Sciences, 286(1895), 20182413 (8 pp.), doi:10.1098/rspb.2018.2413, Institutional Repository