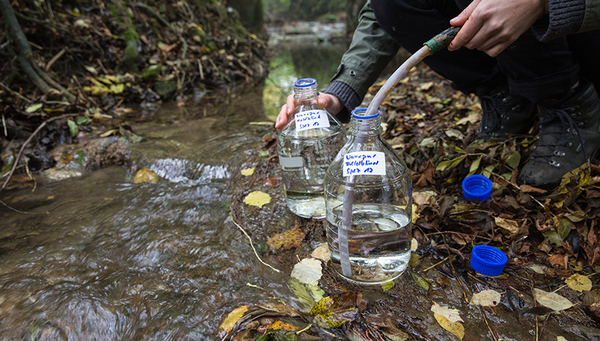 Two studies by Eawag and the Ecotox Centre have once again shown that surface waters in agricultural catchment areas are heavily contaminated with plant protection products. Concentrations of individual substances persisting for several months pose a risk of chronic toxicity and, for extended periods, exceed the levels at which a risk of acute toxicity exists for aquatic plants and organisms. In most of the samples, 30 or more different active ingredients were detected. Studies of stream biodiversity and bioassays confirmed the threat posed by these mixtures of substances.

Between March and October 2017, samples collected from five small streams with catchment areas subject to a variety of agricultural uses were analysed for plant protection products. The Eawag and Ecotox Centre scientists were assisted by five cantons and the Water Quality Platform of the Swiss Water Association (VSA). The investigations were carried out on behalf of the Federal Office for the Environment (FOEN) as part of the National Surface Water Quality Monitoring Programme (NAWA). The results were published today in two articles appearing in the journal Aqua & Gas.

Between 71 and 89 active ingredients were detected at each site, and 145 substances altogether. Water quality criteria (derived from tests for each substance) were exceeded in all five streams. For 3.5 to 6.5 months – i.e. in some cases throughout the vegetation period – stream organisms were exposed to a risk of chronic toxicity. Acute quality criteria were exceeded for between 14 and 74 days. These results are attributable to individual substances of particular concern, but also to the entire mixture of herbicides, fungicides, insecticides and other agents: the risk calculated for the Eschelisbach (canton of Thurgau) was up to 36 times higher – and for the Weierbach (Basel‑Landschaft) up to 50 times higher – than the threshold at which adverse effects on reproduction, development and health are to be expected in plants, animals and microorganisms. For plants, this was observed also by an algal test. In the case of macroinvertebrates, sensitive species were simply not present at contaminated sites.

Risk of chronic adverse effects to invertebrates (e.g. freshwater amphipods) by pesticide mixtures in Eschelisbach/TG from March to October 2017.
A risk number of 1 means that the concentrations measured in the stream are as high as the environmental quality criteria. Up to twice the concentration (risk number 2), one still assumes a low risk, up to 10 times a high risk and over 10 times a very high risk.
>> This graphic is also available as an animated mp4 file.

The limit (0.1 µg/L) specified for organic pesticides in the Waters Protection Ordinance was exceeded at least once by 66 substances, including the herbicides glyphosate and mecoprop. But as these two examples of widely used substances show, this general limit says little about the risks for aquatic organisms, since it does not take substances‘ ecotoxicological effects into account. In the case of glyphosate, adverse effects in surface waters are only to be expected with concentrations over 120 µg/L; on average, concentrations of 0.16  µg/L were measured. In contrast, 18 substances which are harmful even at extremely low concentrations exceeded the ecotoxicological quality criteria lying below 0.1 µg/L. At the same time, certain insecticides with neurotoxic effects – which it only recently became possible to measure – are not even taken into consideration. With regard to substances of this kind, the protection provided for aquatic organisms by the general limit specified in the Ordinance is wholly inadequate.

Substances varying from year to year

Of the five streams studied, two (Eschelisbach and Weierbach) had already been sampled in 2015. A comparison of the two study years reveals a widely varying range of substances. In the Weierbach, for example, concentrations problematic for aquatic organisms were measured for a total of 21 substances, but only 4 of these showed excessive concentrations in both years. This is mainly due to factors such as weather conditions and crop rotation (i.e. changes in the position of cultivated areas relative to surface waters). While overall contamination in the Eschelisbach was slightly higher in 2017 than in 2015, it decreased in the Weierbach.

Given the wide variety of substances applied and the high variability over time, two points are clear: surface water monitoring must cover a broad spectrum of substances – at present, according to Eawag soil hydrologist Christian Stamm, measurement of around 50 plant protection products could account for at least 75% of the risk. And, as Stamm emphasises, a number of measures are required to control surface water contamination: “That includes the replacement of particularly critical substances, a general reduction in pesticide use and the minimisation of losses from agricultural land – all measures which are envisaged in the National Action Plan and which must now be implemented as rapidly as possible.”

Since the publication of the studies carried out in 2012 and 2015, it has been well known that a large number of pesticides – particularly agricultural plant protection products – are present in Swiss surface waters. However, these findings have also been called into question: it was claimed that the streams selected were not representative, and that it was not clear what proportion of the substances derived from non-agricultural applications. For the 2017 campaign, therefore, the investigators demonstrated that virtually no municipal wastewater was measured in the streams sampled, and that – while the sites lay in intensively used catchments – they were by no means unusual. Christian Stamm comments: “For four of the five streams, even ten times more extensive agriculture in the catchment would still be likely to cause exceedances of the quality criteria, and around 13,000 kilometres of Swiss streams fall into that category.“

Original articles in Aqua & Gas 4/2019 (in German, with French summary)

The National Surface Water Quality Monitoring Programme (NAWA) enables the federal and cantonal authorities and other institutions to assess the state of surface waters across Switzerland. The latest in a series of pesticide studies (following those conducted in 2012 and 2015) supplements the basic monitoring network, which comprises over 100 monitoring sites. The results obtained in 2017 document the currently unsatisfactory situation and will help to optimise the monitoring network so that conclusions can be drawn concerning developments over time – in particular, the effects of measures taken under the recently launched National Action Plan on risk reduction and sustainable use of plant protection products.

Photos of sampling and chart