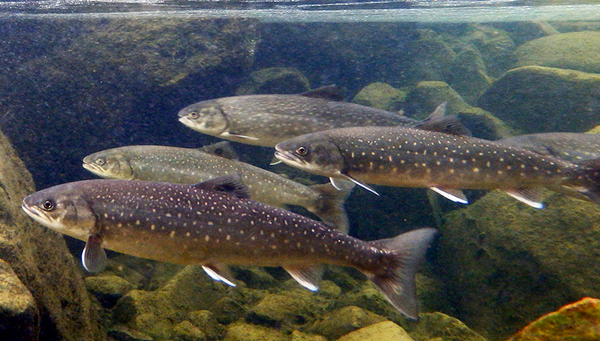 There may be hundreds of species of char living in Greenland’s lakes and rivers, according to a team from the Swiss Federal Institute of Aquatic Science and Technology (Eawag) and the University of Bern, that has discovered the largest known diversity of char species in the catchment area of the Eqaluit River.

“The people who live around the Eqaluit River in the south-west of Greenland do know that there are char living in the river and its lakes”, explains the evolutionary and fish biologist Carmela Dönz. “But they prefer to eat sea fish and take very little notice of the fish stocks in fresh water – which is one of the reasons why the fish appear to have little fear of people.” Outside the region, the rivers and lakes along the coastline created by the retreating Greenland glaciers after the last ice age remain largely unknown.

Carmela Dönz and her colleagues have now investigated the char in the Eqaluit system, and in their publication in the journal “Proceedings of the Royal Society B”, they describe six char species for just the largest of the lakes alone. This is the greatest diversity of char species (Salvelinus alpinus-complex) that has ever been discovered in one lake.

Carmela Dönz (far right) weighs and measures chars in the field with her colleagues Michael Häberli and Florin Kunz.

For evolutionary biologists and fish ecologists Ole Seehausen and Jakob Brodersen, this discovery was not altogether a surprise, as the freshwater lakes of Greenland were populated only by char and stickleback following the ice age, and it was very rare for salmon or eels to swim upstream from the sea. This meant that the char had very little competition when they occupied the ecological niches in the lakes. Moreover, char in southern Greenland have genetic material from two evolutionary lines — one from the Atlantic, and one from the Arctic. This genetic diversity was perhaps what facilitated the rapid speciation and specialisation in differing ecological niches.

Of the six char species in the Tasersuaq, the largest of the seven lakes that were the subject of the investigation, one specialises in eating insect larvae and molluscs from the lake bed close to the shore (Benthos), one is specialised for eating plankton in open water, and two for feeding on stickleback and young char; one small species lives in the deep waters of the lake, and one migrates to the sea. With all these various specialisations, the fish have a diversity of morphological adaptations to their particular ecological niche: the small, deep-water species, for example, has especially large eyes, and the long, slender body of the plankton specialist is a typical adaptation to open waters.

The genetic differences are proof that we are not only looking at ecological adaptations within one species, but at different species that have had very little interbreeding with the other char species in the lake for a long period of time.

In the smaller lakes, the biologists found only two or three char species, and only one each in the smallest lakes. These fish are either specialised for feeding in benthic zones, or are “generalists” — whether this be because they migrate and therefore exploit different habitats, or because the scarcity of resources do not allow specialisation.

In one of the small lakes, the individual fish display adaptations in terms of their anatomy to a variety of different ecological niches, even though they all belong to the same species. These morphological specialisations are far less pronounced, however, than those amongst the different species in the larger lakes — an indication that narrower limits are set for ecological adaptation to more than one niche without speciation. Or, put another way, speciation is not only dependent on ecologically diverse habitats, but also contributes to overcoming limitations of ecological adaptation to different habitats.

“Our char investigations in the Eqaluit system confirm our suspicion that rapid speciation is facilitated through a combination of a diverse gene pool and an ecologically diverse environment”, says Carmela Dönz. Her team thus suspects that there are still hundreds of species of char in numerous freshwater lakes along Greenland’s coastlines that have not yet been described by science.