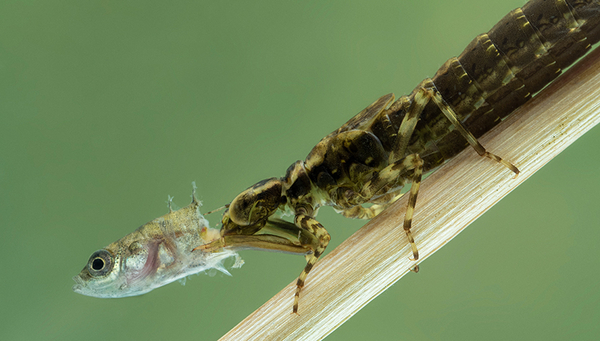 Terrestrial and aquatic food webs respond differently to changes in the environment. Understanding these differences is fundamental to identifying the species most important to an ecosystem and to effectively protecting biodiversity. This is shown by a study led by the research institutes Eawag and WSL and published in the journal Nature Communications.

Biodiversity emerges not only from the sum of all species present, but rather from the interactions between them. The most basic form of interaction is the feeding relationship. Recording all the feeding relationships between species of an ecosystem results in a complex network, known as a food web. The fact that food webs differ becomes clear when looking at terrestrial (green) and aquatic (blue) ecosystems – after all, rivers and meadows accommodate different communities. "At first glance, this observation seems trivial," says Florian Altermatt, Professor of Aquatic Ecology at the University of Zurich and group leader at Eawag. "But in fact, we still know little about how green and blue food webs are structured, how they differ structurally, and whether they respond differently to land use and climate influences." Previous studies have examined food webs either limited to a specific site or isolated to a particular animal or plant species – a large-scale analysis encompassing many sites and species across aquatic and terrestrial ecosystems has never been done before.

Altermatt and Eawag postdoctoral researcher Hsi-Cheng Ho, together with researchers from the Swiss Federal Institute for Forest, Snow and Landscape Research WSL, ETH Zurich and the Universities of Bern and Zurich, wanted to close this gap. As part of the "Blue-Green Biodiversity" research initiative (see box at the end), they investigated for the first time for a large, contiguous area – the territory of Switzerland – how green and blue food webs are structured and how they change in response to climatic and human influences.

Food web diagram: The food web of a locally observed species community can be inferred from the knowledge-based feeding relationships between different species. (Graphic: Eawag)

The comprehensive study was based on data from biodiversity monitoring programmes of the Swiss Confederation, the Swiss Centre for the Cartography of Fauna "Info Fauna" and Eawag, all of which document the occurrence of various animal and plant species at nearly 1,000 sites distributed representatively throughout Switzerland. Based on these occurrences, species interactions were derived and potential food webs reconstructed. At half of these sites, the scientists studied the terrestrial food webs formed by plants, butterflies, grasshoppers and birds; at the other half, they looked at aquatic food webs of fish, aquatic insects and other water invertebrates. The researchers used certain criteria to analyse how the individual food webs are structured.  For example, how many connections, i.e. feeding relationships, there are in total and whether these relationships are spread evenly within the food web or, like hotspots, are only to be expected in some species communities.

The next step was to determine the predominant land use – including forest and agriculture – and elevation above sea level for each site. "Elevation and climate change affect food webs in a similar way because they affect the occurrence of organisms through temperature. Elevation can therefore be seen as a proxy for the potential of climate change – taking into account a few other factors," Ho explains. Finally, depending on land use and altitude, i.e. climate, the researchers compared all food webs with each other.

The comparison shows that green and blue food webs are fundamentally different in their structural characteristics and that they also respond differently to changes in land use and elevation. "In green food webs, for example, we observe fewer food niches with decreasing altitude, i.e. increasing temperature," Ho says. Hence, specialists that have a narrow food spectrum, such as larvae of butterflies feeding on only one particular plant, are likely to have a harder time in a warmer climate. "What's interesting," Ho continued, "is that the blue food webs behave in exactly the opposite way. The food niches, to stick with this metric, become more numerous the lower the elevation. So rising temperatures result in other changes in aquatic food webs." There, specialists may benefit from rising temperatures.

These findings shed new light on measures to protect biodiversity. Preserving as many species as possible – the goal of most efforts to date – may not always be the most effective approach, as Altermatt points out. "The key is to first protect the species that are most important to the food web." He compares it to clockwork: "Some cogs you can leave out and the clock still works. Others, however, are essential; without them, the clock doesn't work any more." But to know which cogs, or species, are essential, you need to know the blueprint and logic of the clockwork, or food web. With their work, Ho, Altermatt and their colleagues have laid the foundation.

The research project "The architecture of community structure, functional traits and trophic networks across blue-green ecosystems" contributes to the Blue-Green Biodiversity research initiative - an Eawag-WSL collaboration addressing biodiversity at the interface of aquatic and terrestrial ecosystems. The initiative is funded by the ETH Board.

While aquatic (blue) and terrestrial (green) food webs are parts of the same landscape, it remains unclear whether they respond similarly to shared environmental gradients. We use empirical community data from hundreds of sites across Switzerland and a synthesis of interaction information in the form of a metaweb to show that inferred blue and green food webs have different structural and ecological properties along elevation and among various land-use types. Specifically, in green food webs, their modular structure increases with elevation and the overlap of consumers’ diet niche decreases, while the opposite pattern is observed in blue food webs. Such differences between blue and green food webs are particularly pronounced in farmland-dominated habitats, indicating that anthropogenic habitat modification modulates the climatic effects on food webs but differently in blue versus green systems. These findings indicate general structural differences between blue and green food webs and suggest their potential divergent future alterations through land-use or climatic changes.
See DOI
See Institutional Repository
Ho, H.-C.; Brodersen, J.; Gossner, M. M.; Graham, C. H.; Kaeser, S.; Reji Chacko, M.; Seehausen, O.; Zimmermann, N. E.; Pellissier, L.; Altermatt, F. (2022) Blue and green food webs respond differently to elevation and land use, Nature Communications, 13(1), 6415 (12 pp.), doi:10.1038/s41467-022-34132-9, Institutional Repository
Created by Isabel Plana
Share with others: