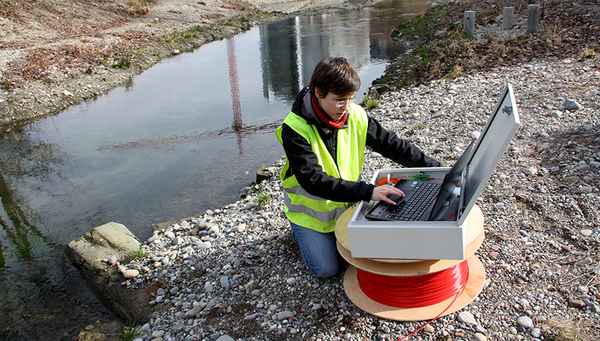 The creation of gravel islands can contribute to the success of river restoration projects, as these structures have positive effects on exchanges between groundwater and surface water. To investigate these interactions in detail, Eawag has developed a new measurement system.

The revitalization of Switzerland’s channelized rivers and streams is a task that will take several generations to complete: under the Water Protection Act (revised in 2011), around 4,000 kilometres of degraded watercourses are to be ecologically enhanced over the next 80 years. But what counts as a successful restoration project? According to an Eawag review, there has been very little systematic evaluation of restoration measures to date, and standard evaluation criteria are lacking.

Between 1979 and 2012, the average restoration rate was almost 10 kilometres per year, but outcome evaluations are only documented for a small number of projects. In cases where data was collected, the emphasis was frequently placed on the distribution of flagship species such as trout. None of the 848 projects implemented over this period included an evaluation of the effects of restoration on exchanges between groundwater and surface water. But these interactions are essential to the functioning of aquatic ecosystems, as they control not only the availability of nutrients and dissolved oxygen but also water temperature and quality.

To allow these interactions to be continuously monitored over long distances in restored watercourses, Kurth developed a new measurement system. This takes advantage of temperature differences between groundwater and surface water to determine the direction of flow (upwelling or downwelling). The new method is based on the distributed temperature sensing technology (DTS; see box). Existing DTS methods could only be used to investigate interactions under gaining conditions (i.e. groundwater upwelling) in small streams. With the new method, measurements can be made irrespective of the size of the watercourse and the hydrological conditions – i.e. also in cases where surface water infiltrates into the subsurface. Because the system is remote-controlled and can be driven by solar power, monitoring can also be carried out at remote sites.

The applicability of the new method in the field was demonstrated in a study carried out on the Chriesbach in Canton Zurich. This urban stream – heavily engineered in the last century – was restored over a length of 900 metres in 2013/2014. Kurth explains: “We investigated and compared groundwater-surface water interactions before and after restoration. This was the first time the hydrogeological effects of restoration had ever been analyzed in a case study.”

Distributed temperature sensing (DTS)
In the system used for this study, laser pulses are injected into a fibre-optic cable buried in the streambed. Light particles (photons) from the laser beam are backscattered, and their energy varies depending on the temperature of the fibre-optic cable. The change in energy, together with the time difference between pulse injection and backscattered light detection, makes it possible for the temperature to be determined accurately along the entire length of the cable (passive DTS). In the summer, when temperatures fall, cold groundwater will generally flow into surface water, and when temperatures rise, warm surface water will infiltrate into groundwater. In the winter, the situation is reversed. In the active DTS method, the metal cladding of the fibre-optic cable is heated and the reaction to this heating is analysed. Exchanges between groundwater and surface water can then also be determined for the section in question. A fibre-optic cable several hundred metres in length can thus be used for monitoring temperatures over long distances, with data being transferred automatically from the remote-controlled system.

For the Chriesbach study, a fibre-optic cable was buried in the streambed at a depth of 40 centimetres with the aid of a specially designed tractor-pulled plough [Fig. 2]. After restoration work had been completed, active and passive DTS measurements were performed in summer 2014 [Fig. 1 and 3]. Although this experimental set-up, as Kurth concedes, is elaborate and relatively costly, there is no risk of equipment being lost during flood events, which means that long-term monitoring is possible.

Based on the findings of her study, Kurth recommends that outcome evaluations should be a requirement for all restoration projects, with comparable data being stored in a national database: “That’s the only way of ascertaining what measures under what conditions most effectively enhance interactions between groundwater and surface water – and ultimately how financial resources can best be employed in future restoration projects.”

Fig. 3: Temperatures measured in the Chriesbach (Canton Zurich) in summer 2014, from 06:00 to 09:00 on the following day. The curves on the left indicate surface water (light blue) and groundwater (black) temperatures. The colour plot on the right shows streambed temperatures measured along a roughly 150-metre section of buried fibre‑optic cable. It is apparent that in certain zones virtually no warm surface water flows past the cable into the groundwater (e.g. the section from 95 to 105 metres), while in others (e.g. at 47 and 137 metres) daily variation in surface water temperatures is clearly reflected in the streambed.

In the age of climate change and ecosystem degradation, governments realise more and more that it is crucial to protect ecosystem health, to preserve water resources and to maintain flood protection. Therefore, several countries, among those Switzerland, have implemented laws to make the restoration of riverine ecosystems a legal obligation. In Switzerland, restoration projects were implemented as early as 1979, prior to these laws coming into force. For this article, 848 Swiss restoration projects, implemented between 1979 and 2012, were investigated, spanning a total of 307 river kilometres. No correlation was found between the geographical distribution of total restored lengths in a way that larger cantons performed more restorations. Neither was there a correlation between the total restored length and the canton's population density or financial status. Restoration activities increased steadily after 1992, with most restorations being reported for the years 2004, 2005 and 2009. The average restoration rate was 9.8 km per year, ranging between 0.5 km in 1979 and 23.9 km in 2004. Restoration measures were very diverse, ranging from measures that directly affected the wildlife, e.g. by providing habitats, to measures which indirectly enhanced conditions for the ecosystem, such as water quality ameliorations. Data regarding success evaluation was only available for 232 of the 848 projects, making it difficult to state whether the implemented restoration projects reached the intended objectives. Over the next 80 years, a further 4,000 km of Swiss rivers will be restored, requiring a restoration rate of 50 km per year, which, according to the data, is an achievable goal.
See DOI
See Institutional Repository
Kurth, A.-M.; Schirmer, M. (2014) Thirty years of river restoration in Switzerland: implemented measures and lessons learned, Environmental Earth Sciences, 72(6), 2065-2079, doi:10.1007/s12665-014-3115-y, Institutional Repository

Created by Kaspar Meuli and Andri Bryner
Share with others: