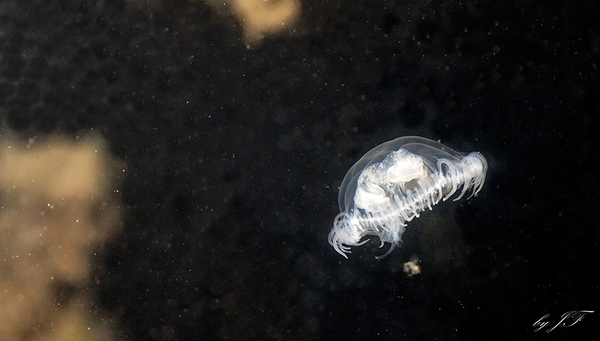 Monitoring freshwater ecosystems by means of environmental DNA methods offers new opportunities for detecting invasive species. An Eawag study has shown that an invasive jellyfish is more widespread in Switzerland than previously thought.

“I would never have thought that this species would be so widespread,” states Rosetta Blackman, a postdoctoral researcher at the aquatic research institute Eawag. She is referring to the peach blossom jellyfish (Craspedacusta sowerbii), a small freshwater jellyfish that is harmless to humans. It originates from the Yangtze River basin in China and is considered an invasive species in Switzerland. Although it is known to occur in Switzerland, it was not known how widespread the species was – despite the fact that invasive species are regularly searched for in Swiss lakes and rivers.

The reason why the researchers were now able to detect it in many Swiss river catchments is because they used a new method: the determination of what is known as environmental DNA (eDNA). This method extracts DNA from water samples to identify the biodiversity in the water body. This approach could establish itself in the future as a complementary method to the traditional monitoring of invasive species, says Blackman. Invasive, i.e. alien, species pose a problem for ecosystems, as they can replace native species. Therefore, it is important to detect their presence as early as possible so that measures can be taken quickly to prevent them from spreading further. In Switzerland, the Federal Office for the Environment (FOEN) and the cantons carry out regular routine monitoring in water bodies for this purpose. Traditionally, this is done using methods such as electrofishing or kick-net sampling.

The latter is used, for example, for macroinvertebrates: these are small invertebrates visible to the naked eye, such as beetles, snails, crustaceans and larval forms of may-, stone- or caddisflies. Hundreds of species of which live in our water, with around 50 invasive species known to be present in Switzerland. In kick-net sampling, samples are gathered by disturbing the substrate of the river or lake and the species collected as they float downstream into a net. They are then identified in the field or in the laboratory under the microscope.

Organisms constantly release their DNA into the environment

By contrast, for the eDNA method, which has already been developed and tested for several years, a water sample is taken and then analysed in the laboratory for DNA fragments of the aquatic inhabitants. This is possible because all organisms constantly release their DNA into the environment – be it in the form of shed skins cells, scales, urine or faeces. Thanks to PCR, even the smallest amounts of DNA can be detected. Eawag is one of the leading centres in the research and development of this method.

In collaboration with the FOEN, ETH Zurich, the University of Zurich and the “Kompetenzzentrum für angewandte Gewässerökologie” (Competence Centre for Applied Aquatic Ecology), the Eawag researchers have now compared the two methods, kick-net sampling and eDNA, to see how well they can detect invasive macroinvertebrates in Swiss waters.

They found that only the eDNA method was able to detect the freshwater jellyfish Craspedacusta sowerbii, which was not detected in the kick-net samples due to its hidden way of life – and despite its abundance. Overall, however, the traditional method still proved to be more reliable and was able to detect significantly more species.

“Used together, the two methods give us a nuanced and robust picture,” concludes Florian Altermatt, head of the project and professor at the University of Zurich. Monitoring via eDNA could easily be incorporated into routine national monitoring, Altermatt says. “That would be an important addition, especially for the early detection of non-native species.”

According to Altermatt, the great potential of eDNA lies in the fact that the method is highly scalable, allowing more samples to be taken at the same time and thus increasing our opportunity to detect invasive species early. Furthermore, it is particularly suitable for hidden species, such as the freshwater jellyfish mentioned above, or to detect new invasive species. “With the traditional methods, one tends to overlook what is not looked for, while the eDNA approach may also reveal such 'unexpected' species,” Blackman added.

For these reasons, the researchers want to further refine the method in the next few years in order to achieve comparable results as with kick-net sampling. For this purpose, Florian Altermatt and his group have co-led the standardisation of eDNA methods in Switzerland (see the methodological guide of FOEN), and they are also collaborating internationally with other researchers, such as in the research programme COST Action DNAqua-Net, to achieve this at the European scale.

What effect the freshwater jellyfish will have on ecosystems is not yet clear. Studies so far indicate that it is not likely to be too much of a problem. However, since it feeds on zooplankton, the species still needs to be closely monitored to identify possible influences on the aquatic food web, particularly when it is in high abundance; eDNA would be the appropriate method to do this,” Blackman sums up.

Regular monitoring of ecosystems can be used for the early detection of invasive alien species (IAS), and provide information for management and preventing them from becoming established or advancing into new areas. Current methods of monitoring freshwater systems for IAS can be both financially costly and time-consuming, with routine monitoring often carried out at low intensity and at only a small number of sites. In this study, we evaluate how environmental DNA (eDNA) metabarcoding for monitoring freshwater macroinvertebrate IAS compares to traditional kick-net sampling as part of a national (Switzerland) and a catchment monitoring programme. Kick-net sampling was more fruitful for the detection of several well-known target macroinvertebrate IAS. However, eDNA samples proved complementary for the detection of IAS that belong to species often being unnoticed by traditional sampling due to methodological or taxonomic reasons. Specifically, the invasive jellyfish Craspedacusta sowerbii, hardly detectable using classic kick-net sampling, was found to be widespread in both the national and the catchment-scale monitoring with the eDNA method only. Our study shows that IAS detection using eDNA is easily implemented in both national- and catchment-scale monitoring campaigns. However, successful detection of target IAS is still highly dependent on primer choice, species' biology, and availability of adequate markers. Specifically, multiple markers should be considered for detecting IAS from several different taxonomic groups, such as those under the 'freshwater macroinvertebrate' umbrella term. While eDNA is still developing in terms of these fundamental methodological requirements, surveillance for both target and non-target IAS using eDNA is likely to increase efficiency in early detection of IAS in freshwater systems.
See DOI
See Institutional Repository
Blackman, R. C.; Brantschen, J.; Walser, J.-C.; Wüthrich, R.; Altermatt, F. (2022) Monitoring invasive alien macroinvertebrate species with environmental DNA, River Research and Applications, 38(8), 1400-1412, doi:10.1002/rra.3947, Institutional Repository