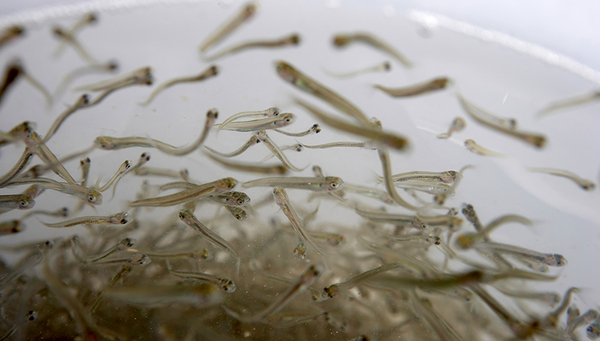 In the last century, the natural reproduction of whitefish and Arctic char in several Swiss lakes was adversely affected by high levels of nutrient inputs. So far, stocking measures have been implemented in efforts to support fish populations and maintain yields. The effectiveness of these measures varies according to the particular species and lake.
By Corinne Schmid and Bänz Lundsgaard-Hansen

Whitefish and Arctic char belong – like trout – to the salmon family (Salmonidae; order Salmoniformes) and are important for both recreational and commercial fishing. As these fish prefer cold, oxygen-rich water, Switzerland’s pre-alpine lakes provide an ideal habitat. Many species spawn in deeper waters and are dependent on gravel and an adequate oxygen supply for successful reproduction. In the last century, however, oxygen availability was significantly reduced as a result of eutrophication, with large amounts of nutrients entering lakes via wastewater discharges and agricultural runoff. Increased inputs of phosphorus and nitrogen accelerate the growth of plants and algae; when algal and other organic matter dies, it sinks to the lake bed, where it is broken down by bacteria and other microorganisms. As oxygen is required for the decomposition process, it may be depleted – especially in deeper layers less well supplied with oxygenated surface water. For deep-spawning fish, the consequences can be fatal: their eggs may die due to a lack of oxygen. Natural reproduction is thus severely impaired or even impossible.

Switzerland’s lakes were affected to varying degrees by anthropogenic eutrophication (Fig. 2). Thanks to more stringent regulation of the use of agricultural fertilizers, the expansion of wastewater treatment plants and the ban on phosphates in detergents, water quality improved dramatically in the latter half of the last century, and phosphorus loads have now largely returned to pre-eutrophication levels. But is sufficient oxygen now also available in lakebed sediments to permit successful development of salmonid eggs? With the aid of specific outcome assessments, we can now determine whether whitefish and Arctic char are able to reproduce naturally again, or whether populations still need to be supported by stocking measures.

Fig. 2: Changing levels of phosphorus in four Swiss lakes between 1950 and 2010. Increased nutrient concentrations have substantial impacts on oxygen availability in deeper waters and can thus severely restrict or even prevent natural reproduction of salmonids.
Data: Federal Office for the Environment.

How can millions of fish be marked?

While the number of fish released into a river section normally ranges from several hundred to a few thousand, stocking of a large lake can easily involve hundreds of thousands or even millions of individuals. This means that the assessment of outcomes in lakes requires the marking of large numbers of fish. Here, a suitable method is otolith marking: the eggs or juvenile fish are immersed for a period of several hours to a day in a fluorescent dye solution. The dye, which is incorporated into the calcified inner-ear bone of the fish, can be clearly detected by microscopy for several years (Fig. 3).

Fig. 3: An unmarked (left) and a marked (right) otolith. The dye taken up by the ear bone enables stocked fish to be identified as such in the laboratory, even after several years.
(Photos: AquaBios)

A mass-marking study of this kind was recently performed in Lake Geneva, where catches of Arctic char and trout had been declining for some years, while whitefish yields were steadily increasing. The International Commission on Fishing in Lake Geneva wished to investigate the catch statistics in more detail and to determine the origins of the salmonids caught. Were catches largely attributable to stocking measures, or did a majority of the Arctic char, trout and whitefish derive from natural reproduction? To find out, otolith marking was carried out in all the juvenile Arctic char and trout (almost a million in each case). In the following years, fish heads were collected by anglers and professional fishermen, and each individual caught could then be identified in the laboratory as a stocked or wild fish.

The study shows that, in Lake Geneva, the effectiveness of stocking varies from one fish species to another (Fig. 4). For example, based on otolith marking, only about a fifth of all the trout caught were found to be hatchery-reared. Major differences were also detected with regard to the survival rates associated with various age groups and release sites: releases of recently hatched juveniles into smaller tributaries were found to be the most successful. Site-specific information of this kind can help to optimize existing stocking practices.

In the case of Arctic char, stocking measures were more successful. More than two-thirds of the fish caught were stocked. The majority were the offspring of captured spawners; only a small number derived from a domesticated strain. This confirms what other studies have already shown: juveniles from wild parents are better equipped to cope with the natural conditions prevailing in the parental habitat than the offspring of domesticated strains. Under domestication, genetic diversity declines with each generation, and it thus becomes less likely that the fish will subsequently be able to adapt to changing environmental conditions, such as higher temperatures or new pathogens.

With regard to whitefish in Lake Geneva, the situation was quite different: stocked whitefish accounted for at most one to four per cent of the total catch. This finding clearly demonstrates that whitefish are once again able to reproduce naturally in Lake Geneva, and measures to support stocks are no longer needed. According to Frédéric Hofmann, who is responsible for fisheries management in Canton Vaud, whitefish stocking is therefore now only being pursued on a small scale in order to maintain know-how and as an insurance measure against fish kills.

Lack of gravel and oxygen for Arctic char?

The fact that most of the Arctic char caught are hatchery-reared while whitefish catches derive almost exclusively from natural reproduction is probably related to the two species’ different spawning sites. In the past, ideal spawning conditions for Arctic char existed in the area of the tributaries, where bedload transport ensured that sufficient fresh gravel was always available even in deeper waters. Today, because sediment transport is much more restricted, the gravel required for reproduction could be in short supply. As Arctic char tend to be deep-spawners, oxygen availability at deeper layers of the lake could also be a limiting factor. In contrast, whitefish also spawn in shallower waters at a wide variety of sites, and they are evidently able to reproduce effectively.

But are total catches actually increased as a result of stocking? Or do the millions of hatchery-reared fish simply compete with and replace a certain proportion of the fish derived from natural reproduction? This question can only be answered if stocking is discontinued. Only then would it become apparent whether stocking measures are actually necessary or whether natural reproduction alone could provide the same – or ultimately perhaps even higher – fish yields.

Fig. 4: Percentage of wild and hatchery salmonids in Lake Geneva. Arctic char were divided into three age groups (2+, 3+ and 4+). Because mortality is higher in hatchery-reared fish than in those derived from natural reproduction, the proportion of wild Arctic char increases from year to year.
Data: Franco-Swiss Consultative Commission on Fishing in Lake Geneva.

Just as the effectiveness of stocking varies from one species to another, huge differences can also be seen when the same species is stocked in different lakes. A study investigating the effectiveness of whitefish stocking – commissioned by the Hunting and Fisheries Section of Canton Aargau – was recently carried out in Lake Hallwil. Here, oxygen depletion in the depths of the lake had led to the extinction of the original whitefish population. For over 30 years, efforts have been made to improve oxygen availability by aeration of the lake. Whitefish populations have been supported by stocking measures. In recent years, water quality has continuously improved and whitefish yields have risen again. Does this mean that natural reproduction has recovered and stocking measures can be stopped? To answer this question, all the hatchery fish reared in one year were otolith-marked, so that the proportion of stocked fish in the lake could subsequently be determined. The results clearly show that natural reproduction of whitefish in Lake Hallwil remains severely restricted. More than 90 per cent of the juveniles were found to be hatchery-reared. However, whitefish capable of reproducing naturally in Lake Hallwil do exist, and the proportion of wild fish is expected to increase further in the future as oxygen conditions in the lake continue to improve.

In 2003, a similar project was carried out by the University of Konstanz and the St Gallen Fisheries Authority on behalf of the International Conference of Deputies for Fishery in Lake Constance (IBKF). The relative proportions of (otolith-marked) stocked and wild fish were determined six months after stocking. In the “0+” age group, over 60 per cent of the whitefish caught were hatchery-reared. How many of the stocked fish would subsequently be caught by professional fishermen or anglers? When spawners were captured in Lake Constance two and three years later, the proportion of marked whitefish was again assessed. The results were similar to those obtained for the “0+” fish. The stocked whitefish thus appeared to fare very well over a period of several years in Lake Constance.

The same question was explored in the study of Arctic char in Lake Geneva. Here, the findings were rather different: while stocked fish accounted for over 80 per cent of the “2+” age group, the proportion fell to less than 50 per cent two years later (“4+” age group, see Fig. 4). Over the years, Arctic char derived from natural production thus fare better than their hatchery-reared counterparts.

Assessments of the performance of a fish species in different lakes indicate that the effectiveness of stocking largely depends on the conditions prevailing in a given lake. In Lake Geneva, where natural reproduction is highly successful, the proportion of stocked whitefish is negligible. In Lake Hallwil, by contrast, stocking measures remain indispensable to the survival of whitefish populations for the time being.

Moving in the right direction

But why does natural reproduction not succeed in some lakes even though phosphorus levels have returned to the original range? If spawning sites are not otherwise degraded (e.g. due to a lack of gravel), the answer probably lies primarily in the sediments where egg development should take place. In lakes which were formerly heavily polluted, sediments remain virtually anoxic and continue to cause oxygen depletion. In cases where pollution levels were extremely high in the past – e.g. Lakes Hallwil, Baldegg or Sempach – this condition is likely to persist. However, the fact that whitefish can now reproduce successfully in Lake Geneva, where pollution levels used to be fairly high, gives grounds for hope that natural reproduction could be equally or even more successful in many other less polluted lakes. Future assessments of stocking outcomes planned for Lakes Constance and Hallwil, and hopefully also elsewhere, should indicate whether particular species can reproduce naturally in the various lakes or whether supportive measures are still required.

This article is based on a number of studies and reports, which the authors will be happy to make available on request.

Created by Corinne Schmid und Bänz Lundsgaard-Hansen
Share with others: