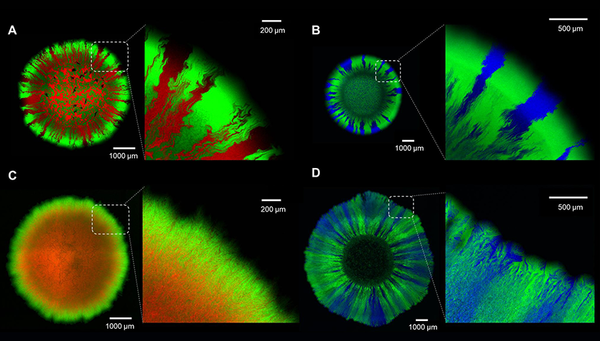 In theory, the genetic diversity of populations should decrease as they expand across space. But this is not true for bacteria. Researchers at Eawag are now showing that fungi play an important role in this context. They make it easier for bacteria to spread and thus also promote genetic exchange between different bacteria.

David R. Johnson, group leader at the Environmental Microbiology department at the aquatic research institute Eawag, notes: “Actually, genetic diversity should decrease as organisms spread across space.” He illustrates this theory with the dispersal history of humans: on the way from Africa, where genetic diversity was greatest, through Europe, Asia, the Americas, down to the tip of South America, more and more genetic diversity was lost. On the one hand, because the small groups that set out in search of new habitats only took a part of the original genetic diversity with them on their journey. On the other hand, because on the migration, groups, parts of groups or individuals died due to random events – further decreasing the genetic diversity. But this does not happen with bacteria. “There are thousands of species of them living side by side,” Johnson says. “And they don’t become fewer in number or less diverse as they spread.”

Johnson’s group focuses on bacteria and their colonies on surfaces, called biofilms. In their latest research, they have now identified a factor that helps maintain and even promote the diversity of spreading bacteria: fungi – more specifically, their hyphae, long filamentous structures that form entire networks. Johnson and collaborators were able to show that hyphae facilitate the spread of bacteria and help maintain bacterial diversity. They promote spatial intermixing and thereby also create conditions under which even additional diversity is created.

Anyone now thinking of a symbiosis between fungi and bacteria will be disappointed. “The explanation is physics, not biology,” Johnson explains. “When the fine fungal hyphae grow on surfaces, a water film forms along their undersides.” Bacteria can use these waterways to move around. This allows them to spread more easily, quickly and further than without such tunnel systems. However, only bacteria with flagella that can actively swim benefit from them.

In their experiments, the researchers placed mixtures of a fungus and differently coloured strains of bacteria in the centre of agar plates, solid culture media on which microorganisms can be grown. They allowed the fungus and bacteria to develop for a while and then stopped the growth of the fungus. They then observed what happened at the edges of the fungal braiding, from where the bacteria spread to the pristine agar plate – where genetic diversity should theoretically decrease.

It turned out that bacteria on plates with fungal braiding formed different patterns than on those on which researchers had applied bacteria alone. While bacteria spread in broad coloured stripes around bacterial mixtures without fungal hyphae, they formed numerous thin lines on the plates with them. The scientists explain that instead of a few bacteria randomly growing on the outside there, many individual bacteria reach the edge of the still uncolonised nutrient medium via the fungal waterways, and from there begin to spread across it. As in this way more different bacteria and also less competitive species or genetic variants can spread, this helps to maintain diversity.

In the presence of fungal hyphae (bottom-row images), the differently coloured bacterial strains form different patterns when they spread spatially than without fungal hyphae (top-row images). (Images from original publication, with permission from Elsevier)

The fact that the bacteria colonies are distributed over a smaller area – visible in the experiments in the narrower bacterial stripes – entails greater spatial mixing of the different bacteria. “As a result, different bacteria are more likely to come into contact with each other,” Johnson explains. That, in turn, can lead to diversity becoming even greater. This is because bacteria are able to exchange genetic material with other bacteria. They do this in the form of plasmids, ring-shaped DNA molecules that they can also pass on to foreign or competing species. Through this exchange, bacteria can acquire new functional properties such as antibiotic resistance.

However, for this to happen, two individual bacteria must come close to each other. Such an exchange between different species is more likely, and thus more frequent, when the bacterial species are more spatially mixed instead of remaining among themselves. In fact, the researchers were able to show that plasmid exchange occurred more frequently on plates with fungal hyphae – and more mixed bacterial communities. Thus, fungal hyphae not only help maintain bacterial diversity, but are actually involved in generating additional diversity.

Experiments with students and a paw print

The research work originally came about by chance. David R. Johnson had bachelor students collect samples of microorganisms with agar plates as part of his teaching at ETH Zurich. The lecturer himself also joined in and had his dog Laika make a paw print. He showed the fungus that grew as a result to his doctoral student Ruan Chujin, who decided to use the fungus for dispersal experiments with bacteria. Incidentally, the fungus is now officially named Penicillium sp. laika.

Cover picture: In the presence of fungal hyphae (bottom-row images), the differently coloured bacterial strains form different patterns when they spread spatially than without fungal hyphae (top-row images). (Images from original publication, with permission from Elsevier)

The amount of bacterial diversity present on many surfaces is enormous; however, how these levels of diversity persist in the face of the purifying processes that occur as bacterial communities expand across space (referred to here as range expansion) remains enigmatic. We shed light on this apparent paradox by providing mechanistic evidence for a strong role of fungal hyphae-mediated dispersal on regulating bacterial diversity during range expansion. Using pairs of fluorescently labeled bacterial strains and a hyphae-forming fungal strain that expand together across a nutrient-amended surface, we show that a hyphal network increases the spatial intermixing and extent of range expansion of the bacterial strains. This is true regardless of the type of interaction (competition or resource cross-feeding) imposed between the bacterial strains. We further show that the underlying cause is that flagellar motility drives bacterial dispersal along the hyphal network, which counteracts the purifying effects of ecological drift at the expansion frontier. We finally demonstrate that hyphae-mediated spatial intermixing increases the conjugation-mediated spread of plasmid-encoded antibiotic resistance. In conclusion, fungal hyphae are important regulators of bacterial diversity and promote plasmid-mediated functional novelty during range expansion in an interaction-independent manner.
See DOI
See Institutional Repository
Ruan, C.; Ramoneda, J.; Gogia, G.; Wang, G.; Johnson, D. R. (2022) Fungal hyphae regulate bacterial diversity and plasmid-mediated functional novelty during range expansion, Current Biology, 32(24), 5285-5294, doi:10.1016/j.cub.2022.11.009, Institutional Repository