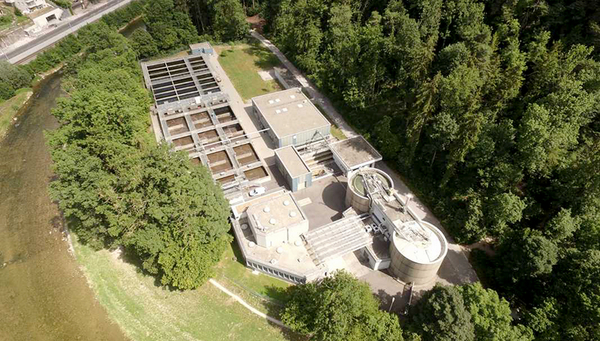 Treating community wastewater takes a lot of energy. Eawag is currently supporting a project that not only presents an alternative to conventional treatment processes but is also designed to enabled increased throughput within a smaller amount of space.

More and more people are moving to cities and agglomerations in Switzerland, which is putting extreme pressure on some wastewater treatment plants: Because they are having to treat greater volumes of wastewater, their energy consumption is skyrocketing. And some WTPs are close to reaching capacity.

Together with various project partners from industry, Eawag has now been testing out a new kind of technology for the past six months at the Sihltal WTP. The technology is designed to allow a space-saving extension to be built at the plant whilst also lowering the plant’s energy consumption. The key to this is a special sieve that looks like an over-sized washing machine drum, which is installed before the activated sludge tank. Because this apparatus holds on to any solids larger than 0.2 mm, only the dissolved substances pass through to the activated sludge tank. “This means that fewer bacteria are needed in the activated sludge tank for treating the wastewater”, says engineer Nicolas Derlon, from the Department of Process Technology, who is leading the project at Eawag. The advantage of this is that less oxygen needs to be pumped into the tank, which in turn makes big energy savings for the plant — up to 30 percent, says Derlon. The aeration of the activated sludge tank is the most energy-hungry part of the treatment process at a WTP.

The pilot phase at the Sihltal WTP demonstrated that the drum sieve not only saves energy in terms of aeration, but even raises energy production from the biogas system there too. The reason for this is that the retained solid masses can be converted directly into methane. “Our calculations and tests show that the WTP’s energy production could potentially be more than doubled”, says Nicolas Derlon.

Thanks to the drum sieve, not only does the energy balance of the WTP improve, but capacity also increases. For WTP Sihltal this means that it would be able to cope with the projected 30-percent population growth until the year 2040.

The drum sieve in brief

The technology is not altogether new: Eawag’s industry partner Huber Picatech has been deploying drum sieves for a good ten years – primarily in developing countries and emerging economies. Because biological wastewater treatment processes are often too expensive for these countries, engineers developed a lower-cost, mechanical wastewater treatment technique in the form of the drum sieve. This innovation has now been deployed for the first time in Switzerland at the Sihltal WTP in place of the conventional pre-treatment apparatus.

The video shows how this works in more detail.