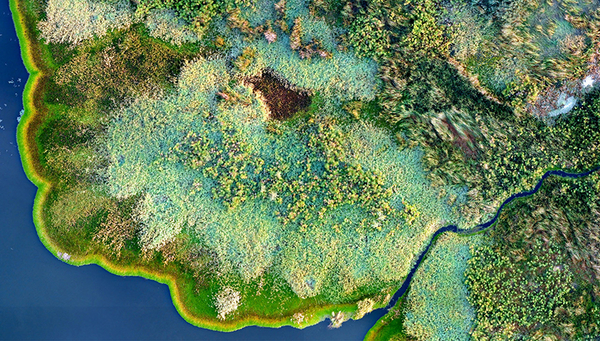 Sprawling carpets of floating plants are the result of too many nutrients. However, they could become part of solution strategies, Eawag researchers show.

They are a beautiful sight to behold: carpets of floating plants such as the water hyacinth (Eichhornia crassipes) in the Zambezi catchment. However, they are also an indicator of inadequate wastewater management in urban and industrial regions of tropical developing countries. After all, where many nutrients accumulate in water, floating aquatic plants find their preferred habitat.

The abundant growth of the plants has been causing Zambia problems for decades. For instance, the water plants regularly clog the reservoirs of hydroelectric power stations – a major challenge for a country that is heavily dependent on hydroelectric power.

Researchers of the aquatic research institute Eawag and ETH Zurich are now shedding a new light on these plant carpets and their importance for the ecosystems of four tributaries of the Zambezi River. According to the researchers, these plants filter the excess nutrients from the water and bind them into biomass. As a result, despite human pollution, the Zambezi River contains largely oligotrophic, i.e. low-nutrient water.

“The floating aquatic plants buffer the waters,” explains biogeochemist Scott Winton of Eawag’s Surface Waters Division in Kastanienbaum. The researchers had anticipated this result – as water hyacinths are also regularly used in constructed wetlands. In the natural environment, however, there has been little research in this area to date.

Moreover, the researchers around Winton were even able to show that the effect in the river is much greater than expected. “In the heavily polluted tributaries, for example downstream from the town of Livingstone, the phosphorus content in the river would be 20 to 30 percent higher without the floating vegetation,” the researcher says. This also means that without the “floating sewage treatment plants” eutrophication would occur in the water. The ecosystem could therefore change completely, fish could die, and biodiversity could decline massively.

However, the focus has been on the negative aspects of such plant carpets; floating aquatic plants repeatedly clog up Zambia’s waterways and irrigation systems, interfere with shipping and fisheries, and disturb the operation of hydropower plants. For decades, expensive and time-consuming – but not sustainable – campaigns have therefore been conducted with the aim of removing the plants.

The researchers recommend new and holistic strategies for dealing with this issue. They are also in contact with the local operators of the hydropower plants. Winton says: “As long as nutrients from residential and industrial areas continue to enter the surface waters, these plants play an important role in keeping the waters clean. But to prevent them from becoming a problem, we need new approaches for handling them.”

“As long as nutrients from residential and industrial areas continue to enter the surface waters, floating plants play an important role in keeping the waters clean.” Scott Winton

There are already concrete ideas for this. Due to the changing of rainy and dry seasons, the floating plant cover is already subjected to seasonal hydrological cycles. It could be possible to take advantage of this effect, for example with artificial floods. In this case, the dams are opened in a controlled manner to flush the plant material out of the bottlenecks where it typically accumulates and into less problematic areas.

Another idea makes use of the fact that the wind regularly blows the floating plants towards the riverbanks. By keeping the water level artificially high, this can be further supported. If the water level then drops in the dry season, the plants become stranded and can be removed together with the bound nutrients. They then serve local farmers as a low-cost fertiliser or can be used for the production of biofuel.

Not applicable to Switzerland

In Switzerland, the pollution of surface waters with nutrients has decreased considerably since the 1980s because of major efforts in water protection. Nevertheless, there are still some over-fertilised waters. However, there is a lack of natural plant vegetation to act as a buffer. Water hyacinth, which is widespread in the tropics, cannot survive in cool Europe.

Instead, the nutrient surplus promotes the growth of cyanobacteria, algae, and phytoplankton. Unlike the floating plants, however, these plants decay much faster, which leads to a lack of oxygen at the bottom of the lake. As a result, more nutrients are released from the sediments, which further increases over-fertilisation.

One prominent effect of nutrient pollution of surface waters is the mass invasion of floating plants, which can clog waterways, disrupting human use of aquatic systems. These plants are widely vilified and motivate expensive control campaigns, but their presence may be providing a poorly recognized function in the cycling of excess nutrients. The capacity for floating plants to absorb nutrients from surface water has been understood for decades, primarily from their use in constructed wetlands for wastewater treatment. Yet, in natural settings, there has not been to date any effort to quantify whether floating plant invasions represent important pools or fluxes of nutrients relative to those of the river catchments in which they occur. We found that seasonal hydrologic cycles in the Zambezi trap and flush floating plants from river choke points, such as dams and river confluences, on an annual basis. Peak plant biomass at such choke points constitutes a proxy for estimating annual plant-bound nutrient loads. We assessed the significance of floating vegetation as nutrient sinks by comparing annual plant-bound nutrient loading to conventional river nutrient loading (dissolved and particulate) for four tributaries of the Zambezi River in Zambia. We found that the relative importance of floating vegetation was greatest in the more urbanized catchments, such as the Maramba River draining the city of Livingstone, representing approximately 30% and 9% of annual digestible phosphorus and nitrogen flux respectively. We also found plant-bound phosphorus to be important in the Kafue River (19%), draining the industrial town of Kafue and extensive sugarcane plantations. These results demonstrate the great potential of floating plants to take up excess nutrients from natural river systems. Given the importance of hydrology in the life cycle of floating vegetation, controlled dam discharges may have an important role in managing them and their water quality treatment functions.
See DOI
See Institutional Repository
Winton, R. S.; Kleinschroth, F.; Calamita, E.; Botter, M.; Teodoru, C. R.; Nyambe, I.; Wehrli, B. (2020) Potential of aquatic weeds to improve water quality in natural waterways of the Zambezi catchment, Scientific Reports, 10, 15467 (11 pp.), doi:10.1038/s41598-020-72499-1, Institutional Repository

EU Horizon 2020 as part of the DAFNE project