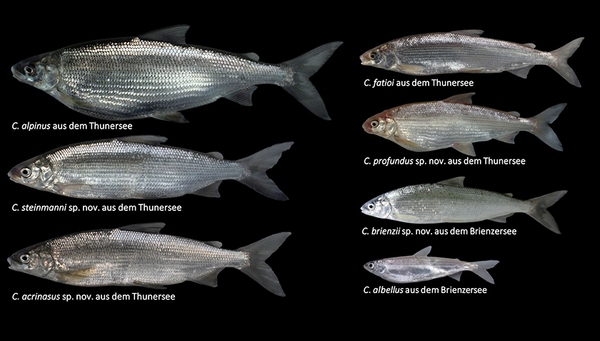 For a long time professional fishermen have known that there is not just one whitefish species in Switzerland, but a whole range of species each with their own specialization and local name. Researchers have now analysed the entire genome of the various whitefish and shown how specialists have all developed independently of each other in each lake region.

Evolution can sometimes progress at an astonishing speed. The 24-plus whitefish species in the large perialpine lakes have all developed since the last ice age, i.e. over tens of thousands rather than millions of years. They differ not just in appearance and size, but also in terms of the depth, where they live and breed, as well as their preferred menu. Near the shore, the large "Balchen" feeds mainly on bottom-dwelling organisms, while in more open water the small "Albeli" feed on plankton, and the medium-sized "Felchen" feed on both. In the very deep lakes such as Thun, Lucerne and Constance, there are even more unusual species that live and spawn in open water or live at depths of more than a hundred meters.

A school of whitefish in the Eawag aquarium. Video: Eawag

Led by Dr Philine Feulner, a team from Eawag - the Swiss Federal Institute of Aquatic Science and Technology, the University of Bern, and the Natural History Museum of Basel, examined 99 genomes of 22 whitefish species and confirmed earlier hypothesis that this diversity has arisen independently in each group of lakes since the last ice age, partly as a result of adaptation to different depths and food sources. Particularly, the edar gene played a key role, which influences the gill-raker count and thus the "sieve density" when it comes to catching insects or plankton. But there were also thousands of other genes that had an impact, most of which were only important in a single lake. It is noteworthy that very different whitefish species from the same lake are still genetically more similar than species which, at first glance, may appear to be similar, but which have developed in parallel elsewhere.

Many species found only here

Genetic exchange within, but also between the larger lakes has led to hybridisation. This has favoured the emergence of unusual species and thus the large variety of endemic whitefish species seen in the perialpine lakes, i.e. species that are unique to this region.

Genomic architecture of adaptive radiation and hybridization in Alpine whitefish

Adaptive radiations represent some of the most remarkable explosions of diversification across the tree of life. However, the constraints to rapid diversification and how they are sometimes overcome, particularly the relative roles of genetic architecture and hybridization, remain unclear. Here, we address these questions in the Alpine whitefish radiation, using a whole-genome dataset that includes multiple individuals of each of the 22 species belonging to six ecologically distinct ecomorph classes across several lake-systems. We reveal that repeated ecological and morphological diversification along a common environmental axis is associated with both genome-wide allele frequency shifts and a specific, larger effect, locus, associated with the gene edar. Additionally, we highlight the possible role of introgression between species from different lake-systems in facilitating the evolution and persistence of species with unique trait combinations and ecology. These results highlight the importance of both genome architecture and secondary contact with hybridization in fuelling adaptive radiation.
See DOI
See Institutional Repository
De-Kayne, R.; Selz, O. M.; Marques, D. A.; Frei, D.; Seehausen, O.; Feulner, P. G. D. (2022) Genomic architecture of adaptive radiation and hybridization in Alpine whitefish, Nature Communications, 13(1), 4479 (13 pp.), doi:10.1038/s41467-022-32181-8, Institutional Repository

Behind the paper: Genomic architecture of adaptive radiation and hybridization in Alpine whitefish (Autor: Rishi De-Kayne)

Whitefish from the large fish inventory of “Projet Lac” in the Natural History Museum of Bern.
(Photo: NMBE)

The fish collection of Paul Steinmann (1885-1953), which was housed at Eawag for many years and has now been handed over to the Natural History Museum in Bern.
(Photo: Andri Bryner, Eawag)

The "Wunderkammer" exhibition in the Natural History Museum of Bern provides insights into current collection activities, modern research methods, and unparalleled historical collections. There are over 15,000 specimen jars standing floor-to-ceiling on shelves. The collection contains 19,000 objects, including crocodiles, penguins, insects, and even a collection of eyes. One of the highlights is the fish collection of the researcher, teacher, and president of the fishing association Paul Steinmann (1885-1953). This collection was housed at Eawag for many years. Newly curated, it now serves as a valuable reference for researchers from all over the world. Since 2010, the “Projet Lac” collection has served as an additional, more recent resource.