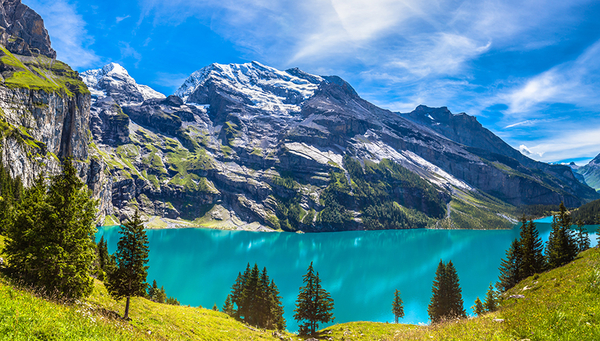 Ecosystems respond sometimes very differently to human impacts. However, it is still poorly understood what causes these differences. A team of researchers from Eawag and WSL is now proposing an integrative approach based on four fundamental processes shaping biodiversity on land and in water. The approach provides guidance for how biodiversity in blue (water) and green (land) ecosystems can be better protected.

For years, researchers have observed that terrestrial and aquatic ecosystems and their ecological communities can respond differently to changes caused by humans. For example, while some ecosystems are very sensitive to climate warming, such as plant communities on mountaintops, others are less affected. How can these differences be explained? A large group of scientists from the WSL and Eawag research institutes as part of the Blue-Green Biodiversity (BGB) research initiative has now provided a set of tools to help explain divergent ecosystem responses to human impacts. The study, which focuses on land versus freshwater systems such as lakes, rivers and streams, was recently published in the scientific journal Ecology Letters.

“According to the theory of ecological communities, there are four fundamental processes that shape local community diversity: dispersal, speciation, species-level selection and ecological drift,” says Ian McFadden, a postdoctoral researcher in the BGB research initiative and co-lead author of the study. A major focus of the BGB study was synthesising the literature to understand whether these four processes differ in their relative importance across terrestrial and freshwater ecosystems. “Understanding the role these processes play in blue and green ecosystems, and how human impacts such as climate change or land use affect them, will help us explain why these systems can respond so differently,” says McFadden. Based on the evidence gathered, the researchers propose a new integrative approach that links human impacts to the four ecological processes.

(1) Dispersal: When new species migrate in from other regions or out of their home region.
(2) Speciation: When one species splits into multiple new species either within a single site or across several sites, because populations are separated due to a geographic barrier.
(3) Species-level selection: Within a community some species are better adapted to local conditions than others. The populations of species that are more well-adapted will tend to increase in size, or be selected for, while the populations of those that are less well-adapted will decrease in size, or be selected against.
(4) Ecological drift: When population sizes are small, random births and deaths can lead to stochastic changes in the abundance of species, also known as drift, and even the extinction of species.

Note: This set of four processes was originally proposed by Vellend (2010, 2016) as the theory of ecological communities. Here selection and drift refer to community ecological processes and not changes in allele frequencies as in genetic studies of natural selection and genetic drift.

One important process that shapes biodiversity at a site is dispersal: new species migrate in, and other species migrate out of a local community. It's a constant coming and going. In their study, the researchers conclude that land organisms generally disperse more easily than freshwater organisms. Terrestrial ecosystems tend to be well connected, allowing land dwellers to migrate relatively freely to new sites.  In contrast, it is more difficult for freshwater dwellers to arrive in new habitats, since their habitat are less well connected.

If humans continue to build barriers in water bodies, such as hydroelectric power plants, freshwater communities will be even further limited in their ability to adapt to environmental change. For example, new suitable habitats can become difficult to access or possibly even inaccessible. On land, the overall greater baseline connectivity of this habitat potentially makes new barriers somewhat easier to overcome or bypass. The researchers therefore expect that freshwater ecosystems are more sensitive to physical changes in their habitat than terrestrial ones. However, land dwellers do not remain unaffected. Human intervention in the landscape, such as roads or fences, can become insurmountable obstacles, especially for mammals, and threaten biodiversity on land as well.

Land dwellers could be more sensitive to climate warming

While freshwater dwellers are highly sensitive to physical changes in their habitat, it is possible that climate warming may affect them less than terrestrial species (see figure). For example, freshwater ecosystems could benefit from the fact that water warms more slowly than land because of its high heat capacity. Water also dampens short-term heat waves, especially in deep lakes, while heat can take full effect on land. Thus, water could act as a buffer against rising temperatures and provide some protection for freshwater inhabitants, especially in deep waters.

In contrast, terrestrial species may be more exposed to climate warming and increasingly, they also lack shady, cool refuges such as forests due to land conversion. The integrative approach of the researchers therefore suggests that terrestrial species may be under greater pressure to adapt rapidly to higher temperatures. In extreme cases, this selection pressure could lead to the extinction of species.

The researchers hope that by implementing the proposed integrative approach conservation practitioners and policymakers will have new tools for biodiversity conservation. “To preserve biodiversity, it is important to know which processes are most influential at any given time, because only then can measures be targeted,” says Agnieszka Sendek, co-lead author of the study. For example, if ecosystems are strongly influenced by ecological drift, i.e., populations are declining rapidly, the primary goal could be to protect population sizes and conserve large-scale habitats. However, if human activities primarily limit dispersal, measures should be taken to better connect remaining habitats. If warming is the overriding problem, the goal may be to create shaded, cool habitats to provide refuges for animals and plants.