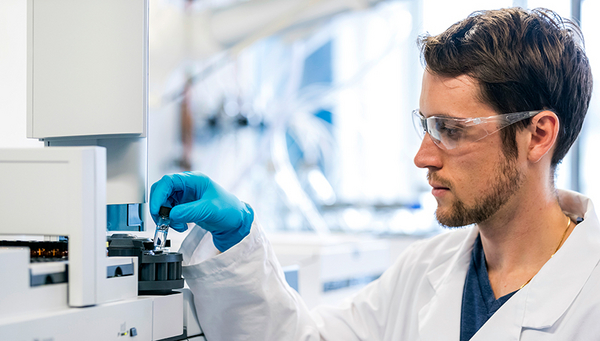 The measurement of trace concentrations of pyrethroid and organophosphate insecticides – now possible thanks to a newly developed analytical method – shows that these compounds can pose a greater threat to aquatic organisms than all other pesticides.

Very low concentrations of pyrethroid and organophosphate insecticides are effective in controlling pests on crops such as oilseed rape. However, if they enter surface waters, they also pose a high risk to aquatic organisms. In water quality monitoring, they have so far slipped through the net, since not only sample collection but also analytical procedures have to be specifically tailored to these compounds. In addition, significant losses of these substances are observed within a few days in uncooled water samples, and analytical instruments have to be capable of detecting concentrations in the picogram (billionth of a milligram) per litre range.

More toxic than all other pesticides combined

Pyrethroid and organophosphate insecticides account for less than one per cent of all the pesticides used as plant protection products in Switzerland. According to a study of these insecticides published today in Aqua & Gas, environmental quality standards were regularly exceeded in five of the six Swiss streams investigated, indicating chronic and in some cases even acute risks to aquatic organisms - for this background, the federal authorities have already taken action: the use of insecticides containing the organophosphate compounds chlorpyrifos and chlorpyrifos-methyl is to be banned.

The risk for aquatic invertebrates was found to be highest in the Beggingerbach, where water quality was unsatisfactory to poor throughout the 8-month study period. Measurements on the Chrümmlisbach permitted comparisons with other pesticides observed over the same period: here, pyrethroid and organophosphate insecticides gave rise to a higher risk for invertebrates than all other (measured) pesticides combined. The risk was increased up to 50-fold in extreme cases, but on average by a factor of 2.5.

In the study, samples were collected from six streams in the Central Plateau between March and October 2018 – Le Bainoz (canton of Fribourg), Ballmoosbach (Bern), Beggingerbach (Schaffhausen), Boiron de Morges (Vaud), Chrümmlisbach (Bern) and Ron (Lucerne). On the Chrümmlisbach, samples had previously been collected in 2017. To keep losses to a minimum, the sampling devices were cooled on-site and the composite samples were cooled during transport to Eawag. The preparation of samples in the laboratory ensured that not only the dissolved insecticides but also the fraction bound to particles would be detected. Gas chromatography coupled to mass spectrometry was then used to quantify the individual substances. Thanks to this elaborate procedure, it was also possible – in all but a few cases – to measure concentrations below the levels associated with risks.

Concentrations under- rather than overestimated

For the purposes of chronic risk assessment, 2-week composite samples are ideal. However, they are less suitable for the assessment of acute risks arising from peak concentrations, since short-term peaks are averaged out in composite samples. It should also be borne in mind that, even when samples are cooled up to the time of analysis, losses of around 40 per cent per week are to be expected.

In the future, quantification of pyrethroid and organophosphate insecticides will thus be an essential part of any assessment of the state of surface waters in Switzerland. Thanks to Eawag’s collaboration with cantonal water protection authorities and the Water Quality Platform of the Swiss Water Association (VSA), five laboratories already have at their disposal an analytical method suitable for routine quantification of these insecticides in the picogram per litre range.

The studies were carried out in collaboration with cantonal agencies, with financial support provided by the Federal Office for the Environment.