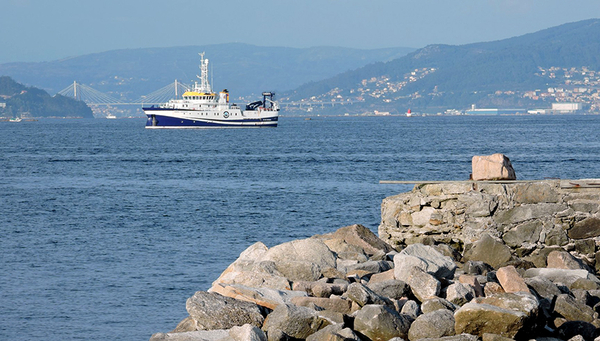 A new study has shown how fish influence oceans’ ecosystems in coastal regions, revealing for the first time the role they play in distributing heat, nutrients and oxygen that keep the system functioning.

Oceans are made up of multiple layers, ranging from lighter, warmer waters at the top to denser, cooler waters at the bottom. Ocean mixing is vital to move heat, oxygen, nutrients and pollutants between different layers and therefore plays a major role in how ecosystems can sustain life. Although it is well established that winds and tides supply the bulk of the energy that drives mixing, the contribution made by swimming organisms has not been understood until now.

In this new study, the University of Southampton, together with a team including the aquatic research institute Eawag, spent fifteen days monitoring water turbulence in the Ría de Pontevedra, a bay in the north-west coast of the Iberian Peninsula. The researchers used an instrument called microstructure profiler, which measures fluctuations of the ocean current velocities and temperature at very small distances.

The results, published in the journal Nature Geoscience, showed that elevated levels of turbulence and mixing occurred every night, comparable to turbulence caused by a major storm, despite the weather staying calm throughout the study. Using acoustic information from the ship-echosounder and samples collected with small fishing nets the research team were able to attribute the signal to the presence of fish aggregations, which gathered in the area at night. In particular, the small nets were full of recently spawned eggs of European anchovy, Engraulis encrascicolus, providing a strong evidence that the anchovies’ frantic behaviour during spawning created the turbulence. .

“We believe that  biological mixing was intense in our observations because the bay is highly stratified - temperature and other properties vary significantly at different depths,” explained Dr Bieito Fernández Castro, a research fellow at the University of Southampton who led the study. “Previous studies have suggested that biological turbulence causes little mixing because the circular motions of water that the fish generate while swimming are too small. This is certainly true in the open ocean, where temperature changes occur over tens of meters. However, we have shown that closer to land, where the layers change over a much shorter distance, the anchovies are able to mix them together,” he continued.

The study has revealed that whilst biological mixing may not be very important in the open ocean, it can be significant in coastal ecosystems, where a thriving marine life coexists with rapid vertical changes in the make-up of the ocean. The vertical mixing created by fish schools could impact the redistribution of temperature, nutrients and other important water constituents, like oxygen, which play a fundamental role in the functioning of the ecosystem upon which the fish themselves rely. The findings therefore highlight the capacity of living organisms to influence and reshape the physical environment where they live.

“The observation of how our anchovies drove mixing was totally fortuitous. We were set to study how turbulence affects marine life and we end up showing, for the first time, that marine life can influence ocean turbulence, which in turn influences marine life!” Dr Fernández Castro concluded.

The study formed part of the REMEDIOS research project, which is led by the University of Vigo (Spain) with partners including the University of Southampton and  investigates the role of mixing in phytoplankton growth.

Created by Steve Bates, University of Southampton
Share with others:

Media informatione of the University of Southampton