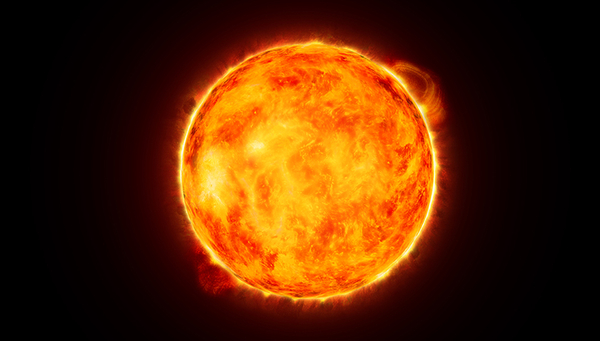 A new theory supports the controversial hypothesis that the planets affect solar activity. It puts forward a mechanism by which the very small influence of the planets could exert its rhythm on such a large system as the Sun. If the theory is confirmed, it could possibly be used to predict solar activity more accurately. This would be of great interest, as large solar flares can cripple electronic infrastructure.

In 2012, Eawag and ETH researcher Professor Jürg Beer published the hypothesis that the planets could influence the activity of the Sun. Together with researchers from Spain and Australia, he had reconstructed the cycles of solar activity for the last 10,000 years with the help of beryllium data from ice cores and compared them with the movement of the planets around the Sun. The correlation was astounding. Solar activity and planetary motion have similar rhythms, thereby suggesting a relationship. This raised hopes of being able to predict the cyclical fluctuations in solar activity based on the known planetary motions. This would be of great interest, because in times of great solar activity, large solar eruptions occur more frequently, which can paralyse power grids as well as communication and navigation satellites.

New explanation for a controversial hypothesis

However, Beer's hypothesis is highly controversial in the scientific community. Many researchers are convinced that the influence of the planets is far too small to have a demonstrable effect on solar activity. But now Carlo Albert, head of Eawag's Mathematical Methods in Environmental Research group, together with research colleagues from Switzerland and Spain, has found an explanation of how the tiny effect of the planets could nevertheless influence the activity of the much larger Sun: stochastic resonance. Under certain conditions, the phenomenon can amplify weak, mostly periodic signals in such a way that they have significant consequences.

So what does this mean for the Sun and the influence of the planets? Solar activity has a clear 11-year cycle. This is known and undisputed. However, there are other cycles. "With simple mathematical models, we were able to show that the Sun basically has two stable states of activity in the 11-year cycle: an active state with large amplitude and high solar activity, and a quieter state with small amplitude and lower solar activity," Albert explains. Scientists refer to this as a bistable system. "We assume that the Sun jumps back and forth between these two states due to turbulences in its interior." Since the turbulences are random, one would expect these changes to happen completely irregularly and unpredictably.

"However, the measurement data we have on solar activity suggest that the change of states does not happen purely at random, but often has a rhythm of around 200 years," says Albert. So that would be a further 200-year cycle superimposed on the 11-year cycle. Jürg Beer and his colleagues had suspected the influence of the planets as the cause of this additional rhythm. But this influence is extremely small. Albert and his colleagues have now found a possibility in which this influence could be increased. Under suitable conditions, noise in a bistable system can massively amplify the influence of a periodic driver – this is called stochastic resonance. The turbulences inside the Sun (the noise) would then amplify the weak influence of the planets (the periodic driver).  The planets would thus exert their beat on the Sun's random jumping back and forth between the two states of activity and influence the rhythm of solar activity.

The highly simplified representation schematically illustrates the occurrence of grand minima - periods of low solar activity - at intervals of about 200 years. In reality, the fluctuations in solar activity are much more irregular and overlaid with many other cycles.

The researchers have now published this new theory on a possible mechanism in the renowned scientific journal Astrophysical Journal Letters. In a next step, they will now investigate to what extent this can be used to calculate observations of solar activity over the past centuries. This would corroborate the theory and also enable a further step, namely the prediction of solar activity for the coming decades and centuries.

Are we observing a transition to a phase of weak solar activity?

Such a forecast would be of great interest. After all, as far as solar activity is concerned, we are currently experiencing an exciting time. "According to Jürg Beer’s hypothesis, which is now supported by our theory, we are at the end of an active phase with a large amplitude of the 11-year cycle. We should slowly be heading for a calmer phase," says Albert. Such phases are also called grand minima. And there are indeed signs that the 11-year cycle is weakening. "At the moment, I'm observing every few days how solar activity is developing," says Albert. "However, it will be several years before we know for sure whether the Sun is really in a new grand minimum."

The development of solar activity is particularly interesting because the last occurrence of a grand minimum about 400 years ago is associated with the Little Ice Age in large parts of Europe, even if this connection has not yet been clearly proven. "Due to climate change, a slowdown in solar activity would of course be desirable," says Albert. "Unfortunately, if it actually occurs, it will hardly be able to compensate for human-caused warming, but at best will only be able to temporarily slow it down a little. So there is still no way around radically reducing greenhouse gas emissions."

The amplitude of the 11 yr solar cycle is well known to be subject to long-term modulation, including sustained periods of very low activity known as Grand Minima. Stable long-period cycles found in proxies of solar activity have given new momentum to the debate about a possible influence of the tiny planetary tidal forcing. Here, we study the solar cycle by means of a simple zero-dimensional dynamo model, which includes a delay caused by meridional circulation as well as a quenching of the α-effect at toroidal magnetic fields exceeding an upper threshold. Fitting this model to the sunspot record, we find a set of parameters close to the bifurcation point at which two stable oscillatory modes emerge. One mode is a limit cycle resembling normal solar activity including a characteristic kink in the decaying limb of the cycle. The other mode is a weak sub-threshold cycle that could be interpreted as Grand Minimum activity. Adding noise to the model, we show that it exhibits Stochastic Resonance, which means that a weak external modulation can toss the dynamo back and forth between these two modes, whereby the periodicities of the modulation get strongly amplified.
See DOI
See Institutional Repository
Albert, C.; Ferriz-Mas, A.; Gaia, F.; Ulzega, S. (2021) Can stochastic resonance explain recurrence of Grand Minima?, Astrophysical Journal Letters, 916(2), L9 (5 pp.), doi:10.3847/2041-8213/ac0fd6, Institutional Repository