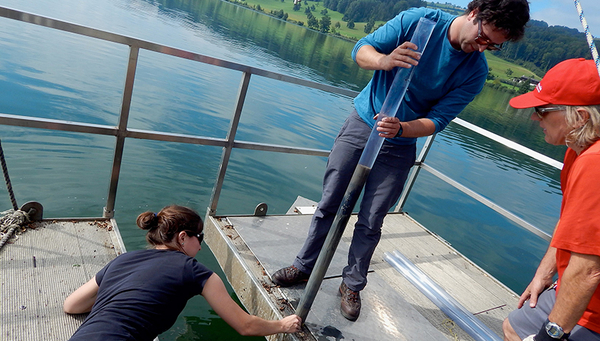 Cyanobacteria were among the first organisms to produce oxygen, which meant they were a significant milestone in the evolution of plants and animals. Countless species of cyanobacteria inhabit almost all habitats around the world. For her doctorate at Eawag, Marie-Eve Monchamp analysed sediment cores from ten different lakes around the fringes of the Alps, thus gaining an insight into the communities of cyanobacteria living over the past 100 years.

The lakes in the perialpine regions of Europe are home to a particular community of cyanobacteria which Marie-Eve Monchamp investigated in connection with her doctoral thesis at Eawag. “We collected sediment cores from ten lakes in Switzerland, Italy and France, and analysed the cyanobacterial DNA extracted from these cores”, she explains. Monchamp and her team were able to use the data to then reconstruct the time and place that the bacterial communities lived. They established that although the overall number of different species in the lakes had not significantly decreased over the past 100 years, the communities across the various lakes became more and more homogeneous as time went on. The species that benefited the most from the changing conditions in the lakes were those that were able to adapt quickly. This can be problematical, as “it is these species, in particular, that are often toxic”, says Monchamp.

The researchers have now drilled down further into the data to find out whether and how human activity affects the biodiversity of these cyanobacteria, and to investigate questions such as whether detergent and fertiliser run-offs affect the cyanobacteria communities, and how the bacteria react to rising temperatures.

The researchers represented the communities of cyanobacteria found in the sediment cores in the form of a phylogenetic tree. Monchamp explains: “Where the species are randomly distributed around the branches of the phylogenetic tree and no clear pattern can be identified, nothing seems to affect their diversity. However, where they are grouped, or distributed extremely evenly, this is an indicator that they are very susceptible to external influencing factors.”

The photosynthesizing cyanobacteria in the ten lakes seem to be moderately affected by external circumstances: In 44 out of 76 species, just over half of the family trees studied were grouped, and the rest were randomly distributed. Comparisons with data on water quality and temperature led the researchers to the conclusion that temperature, especially, was a factor that worked in favour of some species and led to the disappearance of others. “From earlier analyses, we had realised that the stability of the water stratification is also important”, Monchamp adds. Nutrients such as phosphorus and nitrogen on the other hand did not seem to have an impact on the diversity of the cyanobacterial community.

In the laboratory, researchers analyse the DNA of cyanobacteria extracted from lake sediment cores.
(Photo: Eawag)

Data that nobody had expected

During her analyses of the sediment cores, Monchamp came across cyanobacteria that were not part of the photosynthetic group, but did not pay too much attention to them at first. However, when the bacteria started to appear in large numbers in the cores taken from all of the lakes and from all time periods represented by the cores, she became curious: “The data were too interesting to ignore.” She and her team found 63 taxonomic units of non-photosynthesizing cyanobacteria in both the Melainabacteria and the Sericytochromatia phyla.

The researchers started to look for patterns that they had found with photosynthesizing bacteria. “What we found agreed with the minimal amount of information that was available in the literature”, Monchamp explains. Analysis of the phylogenetic tree revealed that Melainabacteria and Sericytochromatia appeared not to be affected by environmental factors such as temperature or nutrient availability. Out of the ten lakes that were studied, only the species composition in Lake Annecy had changed over the last 100 years. This was a somewhat surprising finding to Monchamp, as Lake Annecy is relatively less disturbed in comparison to the other lakes. “We had expected the population to be the most stable under such constant environmental conditions”, she explains. On the other hand, it was less of a surprise to her that the biodiversity of the non-photosynthesizing cyanobacteria had not increased during the period in question, in contrast to that of the photosynthesizing cyanobacteria. “They have an entirely different metabolism, so it’s no surprise that they also behave differently.”

A data point for every community of photosynthesizing cyanobacteria studied shows whether the composition of the community is random (middle section) or whether it is affected by environmental factors (above or below the dashed lines).
(Source: Monchamp et al., 2019)

Interest aroused among the research community

The findings have created quite a stir in the academic community. “I posted the initial findings on Twitter, which aroused a lot of interest”, says Monchamp. Although the presence of non-photosynthesizing cyanobacteria in other aquatic ecosystems had been documented, nobody had studied them within their natural habitat. “Our data collected over a relatively long period of time and a wide geographical area provide an interesting insight into where they live”, says Monchamp. “Further research can now build on this foundation to investigate the ecology of non-photosynthesizing cyanobacteria.”

Disentangling the relative importance of deterministic and stochastic processes in shaping natural communities is central to ecology. Studies about community assembly over broad temporal and spatial scales in aquatic microorganisms are scarce. Here, we used 16S rDNA sequence data from lake sediments to test for community assembly patterns in cyanobacterial phylogenies across ten European peri-Alpine lakes and over a century of eutrophication and climate warming. We studied phylogenetic similarity in cyanobacterial assemblages over spatial and temporal distance, and over environmental gradients, comparing detected patterns with theoretical expectations from deterministic and stochastic processes. We found limited evidence for deviation of lake communities from a random assembly model and no significant effects of geographic distance on phylogenetic similarity, suggesting no dispersal limitation and high levels of stochastic assembly. We detected a weak influence of phosphorus, but no significant effect of nitrogen levels on deviation of community phylogenies from random. We found however a significant decay of phylogenetic similarity for non-random communities over a gradient of air temperature and water column stability. We show how phylogenetic data from sedimentary archives can improve our understanding of microbial community assembly processes, and support previous evidence that climate warming has been the strongest environmental driver of cyanobacterial community assembly over the past century.
See DOI
See Institutional Repository
Monchamp, M.-E.; Spaak, P.; Pomati, F. (2019) High dispersal levels and lake warming are emergent drivers of cyanobacterial community assembly in peri-Alpine lakes, Scientific Reports, 9, 7366 (8 pp.), doi:10.1038/s41598-019-43814-2, Institutional Repository

The phylum Cyanobacteria comprises a non-photosynthetic lineage. The diversity and distribution of non-photosynthetic cyanobacteria (NCY) across aquatic environments are currently unknown, including their ecology. Here, we report about composition and phylogenetic diversity of two clades of NCY in ten lakes of the European peri-Alpine region, over the past ~100 years. Using 16S rDNA sequences obtained from dated sediment cores, we found almost equal proportion of taxa assigned to Melainabacteria and the deepest-branching group Sericytochromatia (ML635J-21) (63 total detected taxa). The topology of our reconstructed phylogenies reflected evolutionary relationships expected from previous work, that is, a clear separation between the deepest branching Sericytochromatia, the Melainabacteria, and the photosynthetic cyanobacteria clades. While different lakes harbored distinct NCY communities, the diversity of NCY assemblages within and between lakes (alpha and beta diversity) did not significantly change over the last century. This is in contrast with what was previously reported for photosynthetic cyanobacteria. Unchanged community phylogenetic similarity over geographic distance indicated no dispersal limitation of NCY at the regional scale. Our results solicit studies linking in-lake environmental factors to the composition of these microorganisms’ communities, whose assembly appeared not to have been influenced by large-scale anthropogenic environmental changes. This is the first attempt to study the diversity and distribution of NCY taxa across temperate lakes. It provides a first step towards understanding their distribution and ecological function in pelagic aquatic habitats, where these organisms seem to be prevalent.
See DOI
See Institutional Repository
Monchamp, M.-E.; Spaak, P.; Pomati, F. (2019) Long term diversity and distribution of non-photosynthetic cyanobacteria in peri-Alpine lakes, Frontiers in Microbiology, 9, 3344 (11 pp.), doi:10.3389/fmicb.2018.03344, Institutional Repository

Cyanobacteria have a major role to play in the global cycles of carbon dioxide and oxygen. In lay terms, these unicellular organisms are often referred to as blue-green algae, but from a biological standpoint they are classified as bacteria. As some of the first living organisms, over two billion years ago the ancestors of modern cyanobacteria were able to split water and produce oxygen. They were photosynthesizers, and so they increased the amount of oxygen in the atmosphere. Around 2,000 species of these organisms have been identified, and they form the lowest rung of the food chain for many animals. Cyanobacteria have adapted to extreme conditions and have colonised deserts, freshwater and saltwater environments, hot springs and salt-containing rocks, and can be found the world over, from the tropics to the poles.