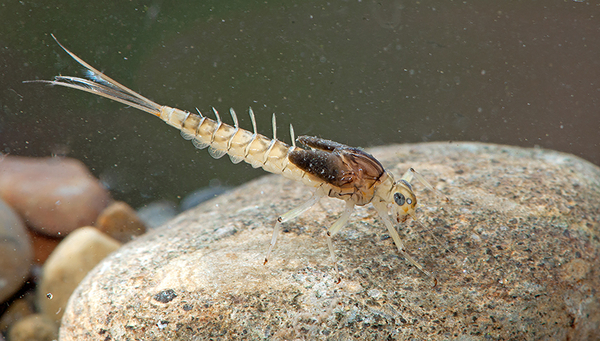 Among aquatic insects in Swiss streams, those species that like it warm and can cope well with pesticide exposure are on the rise. This is shown by a joint study by WSL and Eawag using data from biodiversity monitoring between 2010 and 2019. The results indicate a possible influence of climate change.

Studies on the temporal development of insects in Switzerland and worldwide often conclude that their biodiversity has declined drastically. These results are particularly worrying for terrestrial insects, which perform important tasks such as pollination in the ecosystem. As part of the Blue-Green-Biodiversity research initiative launched by WSL and Eawag, Friederike Gebert now has investigated how the richness of aquatic insects in Swiss streams has changed in recent years.

Her results, which she published together with other researchers in the journal Biology Letters, show a somewhat different picture: The numbers of species present in Switzerland have not decreased in any of the families and genera studied in the period between 2010 and 2019. On the contrary, warm-adapted insect species have increased at middle to higher altitudes, such as the mayfly Baetis rhodani. Insect families that are not sensitive to pesticides, such as chironomids, have also increased. The species numbers of insects that are sensitive to pesticides, such as most caddisflies and stoneflies, have remained stable.

Baetis alpinus, a mayfly, likes it cool. Its range has not decreased in Swiss watercourses despite global warming.
(Photo: Verena Lubini)

Even species that prefer cooler conditions, such as the mayfly Baetis alpinus, have not disappeared despite rising temperatures. For their study, the researchers used data collected at 438 sites in Switzerland as part of the programme Biodiversity Monitoring Switzerland. "We were very surprised by the clear results showing stable and increasing species numbers over the time span of only ten years," says Gebert. It should be noted, however, that this biodiversity monitoring programme primarily records common and widespread species; with this data, statements about rare species cannot be made.

An influence of climate change?

According to the results of the study, the main reason for this development is likely to be climate change: "The increase in species richness is mainly taking place at middle altitudes, through species that are likely to immigrate from lower altitudes and can cope well with warmer conditions," says Kurt Bollmann, who is leading the research project. Whether this will displace cold-adapted species over time is not yet clear. Longer periods of time would have to be studied for that.

Whether water protection measures are another reason for the stable to increasing species numbers cannot be assessed with this study. Since many streams were canalised and polluted during the industrial phase, the species numbers of aquatic insects in Switzerland are likely to have declined during this period. "That is why we assume that the current increase has started from a relatively low level," says Gebert.

So perhaps not all is well with aquatic insects after all? "The more undemanding species have increased, while cold-adapted species have not decreased so far," says Gebert. But it is not only the number of species that is crucial for an ecosystem to function well: What matters most is the quantity of insects that provide their services in the ecosystem. There is still too little data available on this. "It is therefore of utter importance that biodiversity monitoring programmes not only record insect species, but also their abundance and biomass," Gebert demands.

Just like insects on land, aquatic insects are of great importance in water ecosystems. They serve as food for fish and other animals and play an important role as decomposers of leaves, wood and other organic material. Many aquatic insects spend only a part of their life as larvae in water and, after hatching, are an important food source for birds and mammals on land.

This study is part of the research project “Analysing recent developments in abundance, biomass and species richness of aquatic and terrestrial insects in Switzerland”, which contributes to the Blue-Green Biodiversity research initiative - an Eawag-WSL collaboration that addresses biodiversity at the interface of aquatic and terrestrial ecosystems. The initiative is funded by the ETH Board.

Cover picture: The range of the mayfly Baetis rhodani has increased at mid to higher altitudes between 2010 and 2019. (Photo: Verena Lubini)