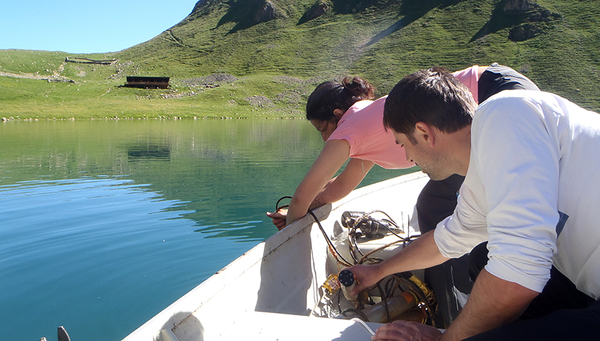 Extreme weather events may be just as important as gradual trends for the long-term trajectories of ecosystems. For alpine lakes, which are exposed to both exacerbated atmospheric warming and intense episodic weather events, future conditions might not be appropriately forecast by only climate change trends, i.e. warming, if extreme events have the potential to deflect their thermal and metabolic states from their seasonal ranges. We used high‐frequency monitoring data over three open‐water seasons with a one‐dimensional hydrodynamic model of the high‐altitude Lake Muzelle (France) to show that rainstorms or windstorms, notwithstanding their intensity, did not trigger long‐lasting consequences to the lake characteristics when light penetration into the lake was not modified. In contrast, storms associated with high turbidity input from the watershed ("turbid storms") strongly modified the lacustrine hydrodynamics and metabolism for the rest of the open‐water season through reduced light penetration. The long‐lasting effects of turbid storms were related to the inputs and in‐lake persistence of very light glacial suspensoids from the watershed. The occurrence of the observed turbid storms was not related to the wind or rain intensities during the events. Instead, the turbid storms occurred after dry and atypically warm spells, i.e. meteorological conditions expected to be more frequent in this alpine region in the upcoming decades. Consequently, storm events, notwithstanding their intensity, are expected to strongly imprint the future ecological status of alpine lakes under climate warming.
See DOI
See Institutional Repository
Perga, M.-E.; Bruel, R.; Rodriguez, L.; Guénand, Y.; Bouffard, D. (2018) Storm impacts on alpine lakes: antecedent weather conditions matter more than the event intensity, Global Change Biology, 24(10), 5004-5016, doi:10.1111/gcb.14384, Institutional Repository