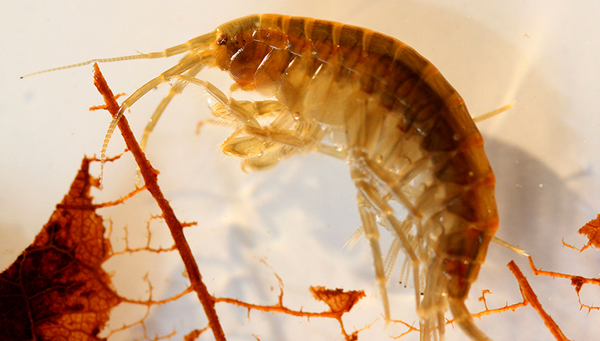 Amphipods in Swiss waters are exposed to insecticides, pharmaceutical residues and other trace substances, and accumulate these in their bodies. However, when water-treatment plants are upgraded, practically no trace substances are found in these organisms according to a new study carried out by Eawag researchers.

The water in Swiss streams is contaminated with numerous micropollutants. However, very little research has been carried out to determine how these trace substances affect organisms in bodies of water. An Eawag research group has been able to show for the first time on a large scale that such trace substances accumulate in gammarids and possibly have a negative effect on them.

“Because the trace substances are highly diluted, we didn’t know at the start whether we would find them at all in the gammarids,” says Juliane Hollender, head of the Environmental Chemistry department at Eawag. But her doctoral student Nicole Munz used innovative measuring methods and found a whole cocktail of substances in the organisms. Munz deployed a tried and tested method for detecting substances in fish, as well as methods from food analysis.

As part of the international EU “Solutions” project and Eawag’s “EcoImpact” research programme (see box), Munz took water samples above and below 13 water-treatment plants (WTP) and collected gammarids. Munz extracted 63 different substances from the animals she removed from around the WTPs. The samples above the WTP discharge sites contained four substances on average, while those below the WTPs contained an average of 14.

The case of the Herisau WTP was particularly interesting. During Munz’s research work this was upgraded with an additional purifying stage designed to eliminate micropollution. The findings showed that before the upgrade, one gram of gammarids contained nearly forty nanograms of trace substances, whereas afterwards none could be detected. “This result is very encouraging,” says Hollender, as the Swiss Water Protection Act calls for an additional purifying stage in about a hundred WTPs.

The graph shows how many nanograms of trace substances are found in one gram of gammarid, with the trace substance concentration markedly higher below the WTP outflows than above. Notably, during the period of research the Herisau WTP acquired an additional purifying stage. After the upgrade no micropollutatnts were found in the gammarids.

The substances found most often in the gammarids were the antidepressant Citalopram, the UV filter Benzophenon, the metal-corrosion protection agent Benzotriazol and the insecticide Thiacloprid. The latter substance is known to have a toxic effect on gammarids and other invertebrates.

In addition to Thiacloprid, Munz found three other insecticides: Imidacloprid, Acetamiprid und Clodthianidin. Although these were only present in the water samples in low concentrations, or not at all, they were surprisingly prevalent the gammarids – indicating that the organisms accumulate the substances in their bodies.

In order to gain a more precise understanding of this accumulation process, Munz collected additional gammarids in nearly natural, uncontaminated waters. She placed the animals in an artificial channel system in order to ascertain how many trace substances would be accumulated by the gammarids within one month. Using this experiment with semi-realistic conditions she obtained data comparative to the field samples and thus gained a better understanding of the accumulation process.

The results do not, however, explain how the significant accumulation of insecticides in the gammarids arises. Juliane Hollender intends to investigate this question through further research. “It is possible that the gammarids take in these materials not only through water but also in their food,” says Hollender. “They eat fallen autumn leaves, for example, which could also be a factor.” For this reason, so-called biomonitoring, which measures the accumulation of substances in living things, becomes ever more important in aquatic risk management. According to Hollender the method developed by Munz is a major factor in showing how water pollution affects organisms.

With the decision to upgrade around 100 water-treatment plants with an additional purification stage for eliminating micropollution, Switzerland is an international pioneer in the water protection field. The move offers researchers a unique opportunity to investigate and compare the effects of these trace substances on aquatic ecosystems.

EcoImpact records molecular, physiological and ecological parameters in 24 selected stretches of streams in the Swiss Central Plateau and in the Jura. In parallel, the researchers are studying the effects of micropollution in controlled experiments using an experimental system with flumes in which micropollutants can be selectively added to the water. It is hoped that EcoImpact will provide clarity on what particular effects micropollutants have on aquatic ecosystems. In additions, studies are being carried out to ascertain whether different types of micropollution have different effects.

Internal concentrations link external exposure to the potential effect, as they reflect what the organisms actually take up and experience physiologically. In this study, we investigated whether frequently detected risk-driving substances in water were found in the exposed organisms and if they are classified the same based on the whole body internal concentrations. Field gammarids were collected upstream and downstream of ten wastewater treatment plants in mixed land use catchments. The sampling was conducted in autumn and winter, during low flow conditions when diffuse agricultural input was reduced. The field study was complemented with laboratory and flume experiments to determine the bioaccumulation potentials of selected substances. For 32 substances, apparent bioaccumulation factors in gammarids were determined for the first time. With a sensitive multiresidue method based on online-solid phase extraction followed by liquid chromatography coupled to high resolution mass spectrometry, we detected 63 (semi-) polar organic substances in the field gammarids, showing higher concentrations downstream than upstream. Interestingly, neonicotinoids, which are particularly toxic toward invertebrates, were frequently detected and were further determined as major contributors to the toxic pressure based on the toxic unit approach integrating internal concentration and toxic potency. The total toxic pressure based on internal concentrations was substantially higher compared to when external concentrations were used. Thus, internal concentrations may add more value to the current environmental risk assessment that is typically based solely on external exposure.
See DOI
See Institutional Repository
Munz, N. A.; Fu, Q.; Stamm, C.; Hollender, J. (2018) Internal concentrations in gammarids reveal increased risk of organic micropollutants in wastewater-impacted streams, Environmental Science and Technology, 52(18), 10347-10358, doi:10.1021/acs.est.8b03632, Institutional Repository

Preliminary study by Nicole Munz, in which she shows that pesticides present the greatest risk for gammarids in comparison with other micropollutants in water.

Micropollutants enter surface waters through various pathways, of which wastewater treatment plants (WWTPs) are a major source. The large diversity of micropollutants and their many modes of toxic action pose a challenge for assessing environmental risks. In this study, we investigated the potential impact of WWTPs on receiving ecosystems by describing concentration patterns of micropollutants, predicting acute risks for aquatic organisms and validating these results with macroinvertebrate biomonitoring data. Grab samples were taken upstream, downstream and at the effluent of 24 Swiss WWTPs during low flow conditions across independent catchments with different land uses. Using liquid chromatography high resolution tandem mass spectrometry, a comprehensive target screening of almost 400 organic substances, focusing mainly on pesticides and pharmaceuticals, was conducted at two time points, and complemented with the analysis of a priority mixture of 57 substances over eight time points. Acute toxic pressure was predicted using the risk assessment approach of the multi-substance potentially affected fraction, first applying concentration addition for substances with the same toxic mode of action and subsequently response addition for the calculation of the risk of the total mixture. This toxic pressure was compared to macroinvertebrate sensitivity to pesticides (SPEAR index) upstream and downstream of the WWTPs. The concentrations were, as expected, especially for pharmaceuticals and other household chemicals higher downstream than upstream, with the detection frequency of plant protection products upstream correlating with the fraction of arable land in the catchments. While the concentration sums downstream were clearly dominated by pharmaceuticals or other household chemicals, the acute toxic pressure was mainly driven by pesticides, often caused by the episodic occurrence of these compounds even during low flow conditions. In general, five single substances explained much of the total risk, with diclofenac, diazinon and clothianidin as the main drivers. Despite the low predicted acute risk of 0%–2.1% for affected species, a significant positive correlation with macroinvertebrate sensitivity to pesticides was observed. However, more effect data for pharmaceuticals and a better quantification of episodic pesticide pollution events are needed for a more comprehensive risk assessment.
See DOI
See Institutional Repository
Munz, N. A.; Burdon, F. J.; de Zwart, D.; Junghans, M.; Melo, L.; Reyes, M.; Schönenberger, U.; Singer, H. P.; Spycher, B.; Hollender, J.; Stamm, C. (2017) Pesticides drive risk of micropollutants in wastewater-impacted streams during low flow conditions, Water Research, 110, 366-377, doi:10.1016/j.watres.2016.11.001, Institutional Repository

Created by Mirella Wepf, Stephanie Schnydrig
Share with others: