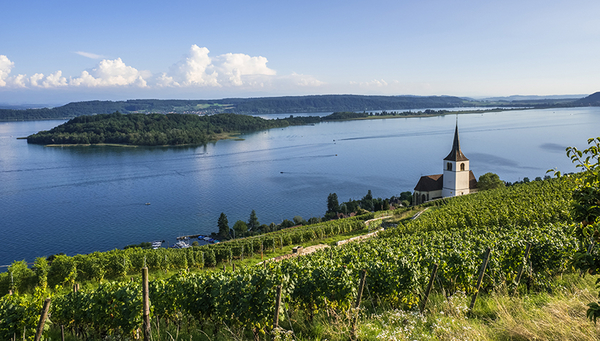 When the wind on Lake Biel blows from the south-west and it rains heavily, large quantities of sediment are washed out of the River Aare into the lake. Since the south-west wind also influences the circulation in the lake, the wind direction determines to a large extent where the sediment is deposited in the lake, namely along the eastern shore towards Biel – an important finding for identifying areas at risk of landslides.

Underwater landslides occur particularly where large quantities of sediment are deposited on steep slopes within a short period of time. Usually, this is a fan-like region in the river deltas of a lake. This is not the case in Lake Biel. There, researchers of the Eawag Water Research Institute, the Federal Institutes of Technology in Lausanne and Zurich, and the Universities of Geneva and Bern have discovered an unusual phenomenon. Sediment accumulates mainly on the slopes of the eastern shore, situated north of the Aare estuary. The reason for this is the wind.

South-west wind drives sediment-laden water from the Aare towards the city of Biel.

The main tributary of Lake Biel and also the main source of sediment is the River Aare. The two smaller tributaries Zihl and Schüss, on the other hand, only transport little sediment. Depending on the wind direction, varying amounts of sediment enter the lake by the Aare and are also deposited in different areas of the lakebed.

During a southwest wind, Lake Biel circulates counterclockwise (left). Sediments which are washed into the lake by the river Aare are deposited on the slopes of the Easter bank. When a north-easterly wind blows, however, Lake Biel rotates clockwise (right). The lake circulation then transports the sediments towards the centre of the lake.
(Graphics: meteolakes.ch)

Due to the topography, two wind directions prevail on Lake Biel: south-west and north-east. If the wind blows from the south-west, most of the sediment enters the lake. This is because a lot of rain also falls in the catchment area of the Saane – a tributary of the Aare – and with this volume of water, the rivers wash countless particles of suspended sediment into Lake Biel. At the same time, the wind drives water in the lake to rotate anticlockwise. This circulation directs the sediment-rich tributary of the Aare into the lake to the right. The current transports the sediments from the estuary along the shore in a north-easterly direction towards the city of Biel, where they are deposited on the slopes of the eastern shore. That is why the underwater slopes with the highest risk of landslides are also found there.

If, on the other hand, the wind blows from the north-east, the catchment areas of the Aare and the Saane generally have dry weather and only little sediment enters Lake Biel. Moreover, the circulation in the lake turns in the opposite direction. The lake water rotates clockwise and transports the low-sediment water from the Aare estuary towards the middle of the lake. There, the few sediments are deposited evenly in the shape of a fan. In contrast to the south-west wind, the north-east wind therefore hardly contributes to increasing the risk of landslides in Lake Biel.

To date, it has been mainly bathymetry – the topography of lakebeds – that has provided information on where in a lake the risk of landslides is greatest. The risk is significantly higher particularly on slopes with a gradient between 20 and 30 degrees. Above 30 degrees the risk is low, because hardly any sediment accumulates.

The research team has now combined sediment measurements in the lake with the results of the high-resolution hydrodynamic Delft3D-Flow model (see meteolakes) for the first time in an interdisciplinary approach. By combining the data sets, the researchers not only uncovered the influence of the wind during sedimentation in Lake Biel, they were also able to identify more precisely risk areas for landslides. This offers several advantages. On the one hand, it makes it easier to plan where complex, high-quality measurements of lake sediments should be carried out. On the other hand, this is a first step towards developing a risk evaluation for underwater landslides.

Destructive potential of landslides under water

Such risk assessments also provide an important foundation for planning construction projects Because when underwater slopes begin to slide, they often destroy infrastructure – both under water as well as along the shore. In 2020, for example, a landslide in Alta, Norway, washed eight houses into the sea (see New York Times article “Landslide in Norway Sweeps 8 Buildings Into the Sea”). In 2009, a landslide in Lake Biel caused the city of Biel to interrupt its water supply from the lake (see Eawag-News "The new old lake water survey in Lake Biel"). In 1992, a landslide occurred in Lake Lugano due to construction work, which damaged Lugano Airport. In 1875, a landslide near Horgen washed the newly-built railway tracks into Lake Zurich. In the 18th and 19th centuries, several houses and quays around Lake Geneva were lost due to underwater landslides. In the year 563, a landslide triggered a tsunami that was so high that it washed over the walls of the city of Geneva.

In 1868, the first "Jura water correction" diverted the River Aare via the Hagneck canal into Lake Biel to prevent flooding. The diversion increased the water intake to the lake from 55 to 240 cubic metres per second and thus the inflow of sediments. A group of researchers from Eawag Water Research Institute, the Federal Institutes of Technology in Lausanne and Zurich, and the Universities of Geneva and Bern have used this river engineering project as a case study to investigate the long-term impact of such a large-scale river diversion on sedimentation.

The researchers found numerous large-scale landslides in Lake Biel on relatively flat slopes, which are otherwise only known for areas with high seismic activity. In the region around Lake Biel, however, earthquakes occur only rarely and are only very weak. The observations therefore suggest that the underwater slopes can also slide down even without seismic triggers. The researchers assume that the correction of the Jura waters and the associated rapid accumulation of sediments on the eastern shore of Lake Biel increased the instability of the slopes.

The researchers see another reason for the increased instability in the Nidau-Büren canal. It was widened and deepened during the "second Jura water correction" between 1963 and 1973 to increase the outflow from the lake. At that time, 2.7 million cubic metres of excavated material were transported to an underwater storage site, which, on the basis of current investigations, has been classified as unstable. The researchers suspect that this excavated material has also led to landslides.

River engineering projects are developing rapidly across the globe, drastically modifying water courses and sediment transfer. Investigation of the impact of engineering works focuses usually on short‐term impacts, thus a longer‐term perspective is still missing on the effects that such projects have. The 'Jura Water Corrections' - the largest river engineering project ever undertaken in Switzerland - radically modified the hydrological system of Lake Biel in the 19th and 20th Century. The deviation of the Aare River into Lake Biel more than 140 years ago, in 1878, thus represents an ideal case study to investigate the long‐term sedimentological impacts of such large‐scale river rerouting. Sediment cores, along with new high‐resolution bathymetric and seismic reflection datasets were acquired in Lake Biel to document the consequences of the Jura Water Corrections on the sedimentation history of Lake Biel. Numerous subaquatic mass transport structures were detected on all of the slopes of the lake. Notably, a relatively large mass transport complex (0·86 km2) was observed on the eastern shore, along the path of the Aare River intrusion. The large amount of sediment delivered by the Aare River since its deviation into the lake likely caused sediment overloading resulting in subaquatic mass transport. Alternatively, the dumping since 1963 in a subaquatic landfill of material excavated during the second phase of river engineering, when the channels flowing into and out of Lake Biel were widened and deepened, might have triggered the largest mass transport, dated to 1964 or 1965. Additional potential triggers include two nearby small earthquakes in 1964 and 1965 (MW 3·9 and 3·2, respectively). The data for this study indicate that relatively large mass transports have become recurrent in Lake Biel following the deviation of the Aare River, thus modifying hazard frequency for the neighbouring communities and infrastructure.
See DOI
See Institutional Repository
Dubois, N.; Råman Vinnå, L.; Rabold, M.; Hilbe, M.; Anselmetti, F. S.; Wüest, A.; Meuriot, L.; Jeannet, A.; Girardclos, S. (2020) Subaquatic slope instabilities: the aftermath of river correction and artificial dumps in Lake Biel (Switzerland), Sedimentology, 67(2), 971-990, doi:10.1111/sed.12669, Institutional Repository