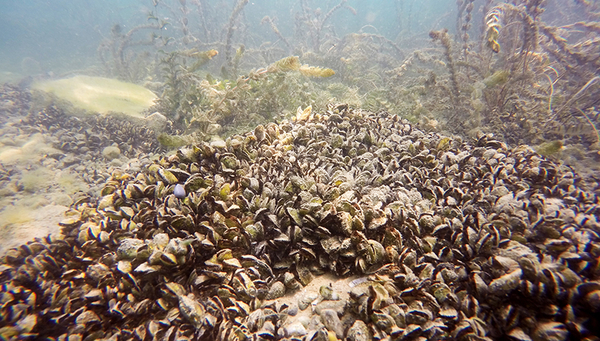 New research findings, and a resulting fact sheet, provide insights into the problematic spread of the invasive quagga mussel in Switzerland. The authors of the fact sheet are concerned that the aggressive spread of this mussel species will have a substantial detrimental effect on lake ecosystems.

The zebra mussel has been around in Switzerland since the 1960s, whereas the quagga mussel was first found here in 2014. Since then, it has been introduced into several Swiss lakes. It has almost completely replaced the zebra mussel in Lake Constance. The quagga mussel is able to reproduce almost all year round and can inhabit the soft substrate in deep-water zones. These characteristics, together with the fact that it is more efficient at absorbing nutrients, are considered to be the main reasons why the quagga out-competes the zebra mussel in deepwater lakes, and why it is increasingly crowding it out.

The quagga mussel feels at home on almost every kind of surface: seen here on the piles supporting the Bregenz lake stage.
(Photo: Thomas Blank, Vorarlberg Department of Water Management)

Since its first appearance in Switzerland in 2014 in the River Rhine near Basel, the quagga mussel has rapidly spread throughout Switzerland, as ascertained by a team led by Linda Haltiner from the Swiss Federal Institute of Aquatic Science and Technology, Eawag and by Hui Zhang from the University of Konstanz. It has so far been found to be present in the following lakes: Lake Geneva, Lake Constance, Lake Neuenburg, Lake Bienne, Lake Murten and Hongrin Lake.

The mussels either spread naturally by floating in the current in their larval state and being carried downstream, or by unintentionally being transported by humans in the ballast, bilge or engine-cooling water of boats and leisure craft used on numerous lakes. In addition, the adult mussels adhere firmly to boats and other objects, and if these are not cleaned or properly dried before being moved to different lakes, the mussels can spread in this way, too. According to the researchers, this extremely rapid spread of the quagga mussel has implications for the Swiss lakes that have not yet been invaded by the species.

Current distribution of the quagga mussel in Swiss lakes (red dots). The quagga mussel was first found in Switzerland in 2014, in an environmental DNA probe taken from the Rhine in Basel. The annual figures next to the dots give the year of first sighting. Lakes where no quagga mussels have been found are shown with empty squares. The remaining lakes have not been investigated. (Figure: Eawag, based on REABIC / doi.org/10.3391/ai.2022.17.2.02)

In lakes which have a quagga mussel infestation, the species dominates with far-reaching consequences. This is also evident from its rapid spread in Lake Constance, where it first appeared in 2016. By 2017 it was already present in every corner of the lake, and it has been continuing to spread in the shallow water zone ever since. It is now even colonising the lake in the deeper waters, and is expected to further increase in population density in the deepest zones.

A new fact sheet (in German), compiled as a part of the research project “SeeWandel” (LakeChange), summarises the reasons for the quagga mussel’s rapid and widespread colonisation of Lake Constance, and the potential consequences of this for the lake’s ecosystem.

Consequences for the ecosystem and society

According to Piet Spaak, a researcher at Eawag and project lead for the SeeWandel project, the detailed consequences of the quagga mussel’s colonisation of perialpine lakes are as yet unknown. He says: “On the basis of observations that we have from North America, we fear that the presence of the quagga mussel will have far-reaching consequences for our lakes’ ecosystems, the balance of which could potentially be upset”.

Possible consequences may include:

The researchers recommend that waters not yet affected be protected as far as possible against introduction of the species. According to current knowledge, the most important measure that can be taken is to prevent further spread: The utmost efforts should be made to protect as-yet unaffected waters from importation of the species. This can be achieved, for example, by awareness-raising campaigns, or by mandating cleaning for boats that have previously been used on another lake. It is also vitally important, says Piet Spaak, to introduce regular and coherent monitoring for the purposes of early identification as well as to better understand the propagation patterns and population dynamics of the quagga mussel.

Seven research institutions in three countries (Germany, Austria and Switzerland) are working closely together on Project SeeWandel. They are investigating the complex interplay between nutrient depletion, climate change, invasive and non-native species and other stress factors. The focus of their research includes looking at how these factors affect the ecosystem of Lake Constance in terms of biodiversity and function, and the consequences for human use of the lake. For further information, please visit the project website.

Created by Yannik Roth, Annette Ryser
Share with others: