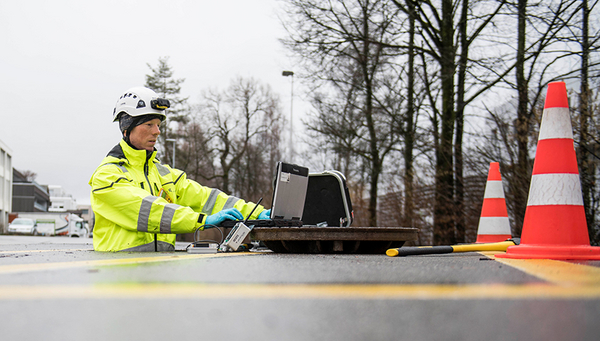 A new EU project is building bridges between experts from academia and industry in the field of urban drainage. The aim of the project is primarily to make local research infrastructure available to partners throughout the EU – including Eawag's urban water observatory (UWO) in Fehraltorf.

Enthusing about the aquatic research institute Eawag, Peter Vanrolleghem, waste water engineer from Canada’s Laval University says “This is where the mathematician gets to understand what activated sludge is. This is where I can discuss infiltration water with a social scientist, and rainwater overflows with a political scientist.” Vanrolleghem is currently on a return visit to Dübendorf, having been the first visitor to the Synthesis Centre in 2017, on a trial basis.

A project conceived in 2017 by Jörg Rieckermann, Joao Leitao and Frank Blumensaat, all from the Urban Water Management department, together with Peter Vanrolleghem and colleagues from Spain, is now taking off. The project is called Co-UDlabs, which stands for “Collaborative Urban Drainage research labs communities”, and has received four million euros in funding, to last at least four years, from the EU programme INFRAIA in the Horizon 2020 framework. In addition to Eawag, six other renowned establishments are involved in the project: the Spanish University in A Coruña, INSA in Lyon, the Universities of Sheffield (UK) and Aalborg (Denmark), as well as GRAIE and Euronovia in France. The idea is to enable other researchers as well as staff from commercial enterprises throughout Europe to have increased access to research facilities like the testing hall at Eawag, where tests can easily be carried out using real waste water, or the infrastructure of the Urban Water Observatory in Fehraltorf. The intention is to grow the network of academics and those working in industry, and for the players from both spheres to work together to find solutions to the ever-increasing challenges in the urban drainage sector.

The network will not only enable collaborative experimentation, but will also allow a common set of standards to be developed, and organisational barriers to be overcome. “Across Europe, we have a wealth of data and official standards regarding the operation of waste water treatment plants, but this is not the case for sewage systems or other elements of urban drainage”, says Eawag researcher Jörg Rieckermann. He goes on to say that although towns and cities do collect data, the data usually come to a standstill right there. In a nutshell: every community is only concerned with itself, and does not share its knowledge. Datasets – e.g. on waste water spillover into natural waterways and water bodies – cannot be compared with each other as there are no common standards or harmonised guidelines. And since there has been a lack of data in the past about the operational modes of sewage systems, there is also a lack of experience in working with such data. This means that there is no generally accepted best practice for sewage systems, unlike in the area of waste water treatment, where there is already a solid body of knowledge.

The Co-UDlabs initiative aims to address these shortcomings. Jörg Rieckermann is heading up the data harmonization and capacity building section of the project. “Harmonisation starts with us all employing the same unit and time standards”, says Jörg. This includes defining the processes and calibrating instruments to the same specifications. One of the goals will be to eventually allow comparisons to be drawn between the sewage systems in Europe. The demands in terms of maintenance and renovation of these systems are enormous, and at the same time, the pressure on them is constantly growing as a result of urban densification, water treatment plant upgrades and climate change. A vast amount of money (around 2.5 trillion euros) has already been poured into Europe’s sewage systems.

Rieckermann likens the forthcoming coordination and collaborative use of urban water management research facilities to astronomy: “In the past, every astronomer would look through his own telescope and describe the patch of sky that he saw. Nowadays, telescope arrays are often constructed – in other words, groups of telescopes are arranged in such a way that their totality functions in a similar way to a single giant telescope. This allows the astronomers to collect better quality data, as long as the group is well coordinated.”

Hackathons on 23rd and 25th November

An initial online workshop recently took place (on 3rd-4th November), in which the participants discussed research questions and staked out the basics of “good practice”. Two hackathons will be taking place on 23rd and 25th November with the aim of forming interest groups and coming up with concrete projects that will be researched through the Co-UDLabs “telescopes”. Anyone who is interested can sign up for the mailing list https://co-udlabs.eu. Up-to-date information can also be found on the @CoUDlabs Twitter and on LinkedIn: Co-UDlabs.