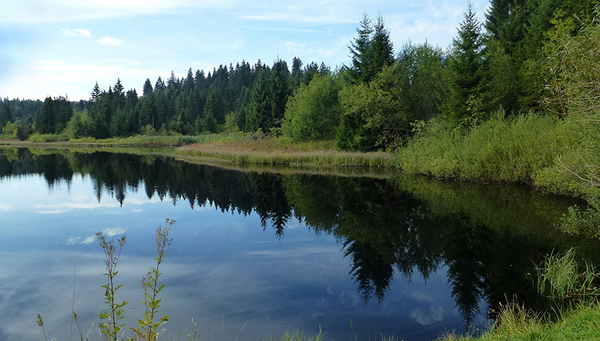 To mark this year’s International Day for Biological Diversity on 22 May, professor Catherine Graham and professor Florian Altermatt explain in an interview why it is important in biodiversity research to look beyond systemic boundaries. The two scientists lead the joint research initiative “Blue-Green Biodiversity” between WSL and Eawag.

Catherine and Florian, the theme of the International Day for Biological Diversity (IDB) is ”Our solutions are in nature”. What does that mean from your point of view?

Catherine: The theme emphasizes that many different aspects of our livelihood come from nature, for example clean water, food, drugs or recreation. However, nature can only provide these services if there is a broad variety of species. Imagine a company with only managers. It wouldn’t work. A company needs people with different expertise. It’s the same with biodiversity: nature only works and provides humans with everything we need because there are many species, each good at something different.

Florian: Our wellbeing is truly depending on nature and high biodiversity. We have to realise that humanity is not separated from nature, but that we are an integral part of it. Functioning ecosystems depend on high biodiversity, to supply us with oxygen, clean water, food and many other ecosystem services. Moreover, biodiversity provides us with non-material goods such as happiness, for example, when you walk through a diverse landscape. We therefore have to learn how to manage or protect nature in ways that maintain biodiversity and the benefits it provides.

Why is the loss of biodiversity dangerous for us humans?

Florian: A high variety of species offers a large pool of undiscovered possibilities and potentials. For example, the genetic diversity of plants can be used to develop new resistant crops or effective drugs. If the pool gets smaller, the possibilities are reduced. So, if we lose biodiversity, we basically lose an insurance. And once lost, it’s lost for ever.

Catherine: Insects are a good example of why we need biodiversity. In many systems, we rely on managed honey bees to pollinate our crops. If something happens to the honey bees, there are few backups as viable populations of native bees and other insects often are not maintained in heavily agricultural landscapes. For this reason, it is important to maintain insect biodiversity in general.

Florian: Biodiversity also stabilises ecosystems and contributes to their resilience. This is important in the context of climate change. Ecosystems must adapt to the new conditions. With a high level of species or genetic diversity, ecosystems can cope much better with this change. This is important, because only then will the ecosystems be able to provide us with the services Catherine has mentioned before.

Florian, what fascinates you about biodiversity?

Why is biodiversity under threat?

Florian: There are many factors. The destruction of habitats due to intense land use practices, such as agriculture or urbanisation and non-sustainable use of natural resources, are among the major threats to biodiversity. Also pollution, especially chemical pollution, is negatively affecting biodiversity. Further negative effects on biodiversity are caused by direct exploitation of organisms, such as overfishing, by non-native species and climate change.

Catherine: Most factors that impact biodiversity, in general, are well known. However, we don’t know exactly which species are going to be affected or the implications this will have on other species. Links between species are important, but it’s hard to predict exact outcomes because nature is complicated. That’s an additional reason beyond what Florian mentioned as to why it is difficult to maintain biodiversity.

What about biodiversity in Switzerland?

Florian: The situation is comparable to global trends: the intensification of land use by agriculture, urbanisation and expansion of infrastructure such as for transportation have strongly altered natural ecosystems and contributed to the loss of biodiversity, especially since the 1950s. In the medium term, climate change will become more significant due to our mountainous topography. Organisms adapted to colder climates will have to shift their habitat range to higher elevations, but may eventually run out of suitable habitats.

Catherine, you lead the new research initiative Blue-Green Biodiversity together with Florian. What does “blue-green” mean?

Catherine: The point of blue-green is to study both aquatic and terrestrial systems simultaneously. So far, scientists tend to focus on a specific ecosystem. But the systems are interconnected. For example, many insects have a life stage in water, before they emerge to a life stage on land. Insects that emerge from the water are very nutritious to birds, because they are rich in fatty acids. These connections are not usually studied. It is also important so study more than one system to learn about fundamental principles. One of these would be resilience. If we disturb an ecosystem, how long is it before the ecosystem returns to its previous state? If experts from both sides simultaneously study the same principle in both terrestrial and aquatic systems with a similar approach, we can begin to understand the underlying mechanisms in a more cohesive way.

Florian: I agree with Catherine. A focus on aquatic or terrestrial habitats only, as was often the case in the past, isn’t able to capture the whole system. We need to study biodiversity in a more holistic way or we will miss important dependencies and cascading effects. For example, agricultural practices can have very strong effects on the water quality and aquatic biodiversity. Consequently, terrestrial and aquatic ecologists need to team up to study the dynamics across ecosystems.

Catherine, what fascinates you about biodiversity?

The initiative started about two months ago. What will be the first steps this year?

Catherine: The first step was to have the scientists at both institutes identify the most important questions at the interface between terrestrial and aquatic systems. Today we have a series of proposals from many different interdisciplinary groups of scientists. We will have an independent evaluation to decide which ideas have the greatest potential to answer critical questions, both in terms of science, outreach and societal benefit. The first year is about establishing around ten one-year projects. It’s really ambitious.

And what are the main goals for the following four years?

Florian: We want to set up impactful research projects, and link these projects to other national and international biodiversity scientists. We also want to train and inspire a new generation of researchers, for example doctoral students. Finally, besides pushing the frontier of fundamental biodiversity research forwards, we plan to come up with specific recommendations for stakeholders. The aim is to ensure that the results can be implemented as quickly as possible. This is a strength of Eawag and WSL: the combination of fundamental and applied research and the ability to respond to the current needs of society, such as the biodiversity crisis.

What can society or individuals do to tackle the biodiversity crisis?

Florian: We have to reduce the consumption of resources and we have to use them in a more sustainable manner. Our way of living is currently using more resources than the natural ecosystems are able to provide in the long term. We are basically living on the resources that we borrow from future generations. That has to change.

Catherine: Equally important is connecting to nature. When we walk in meadow looking at all the blooming flowers and buzzing insects, we realise how beautiful biodiversity is. Seeing this beauty motivates us to conserve nature and to make decisions where we might preserve biodiversity.

Florian: We must decouple our happiness and wellbeing from a pure increase in consumption and economic growth. It might be a challenge to change our way of living, but we cannot continue in the long term as we have done in recent decades. 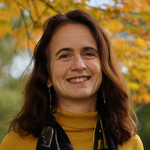 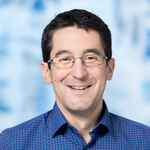