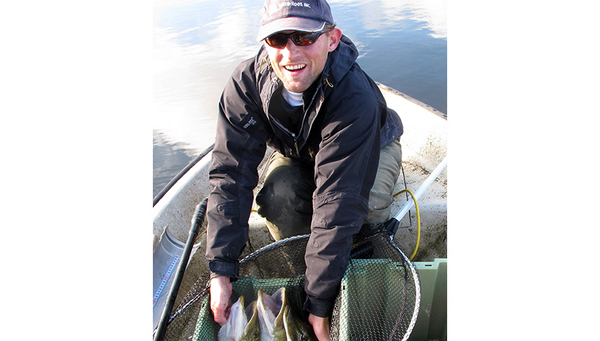 Patterns of animal migration and the ecological forces that shape them have been studied for centuries. Yet ecological impacts caused by the migration, such as altered predator–prey interactions and effects on community structure, remain poorly understood. This is to a large extent due to the scarcity of naturally replicated migration systems with negative controls, that is, ecosystems without migration. In this study, we tested whether partial migration of certain species within the overall prey community affects foraging ecology of top predators and thereby alters energy pathways in food webs.

We carried out the study in independent replicated freshwater lake systems, four with and four without opportunity for prey migration. Specifically, we compared predator foraging mode in lakes where cyprinid prey fish perform seasonal partial migrations into connected streams with lakes lacking migratory opportunities for prey fish. We found clear seasonal bottom-up effects of prey migration on predators, including changes in size structure and total biomass of ingested prey, size-specific changes in littoral versus pelagic origin of diet, and a higher degree of feast-and-famine for predators in systems with migratory prey. Our analyses further showed that partially migratory prey species constitute a larger part of the prey community in systems that allow migration. Hence, prey migrations have important implications for predator foraging ecology and may cause seasonal shifts in the importance of their supporting energy pathways. We suggest that such bottom-up effects of partial migration may be a widespread phenomenon both in aquatic and in terrestrial ecosystems.