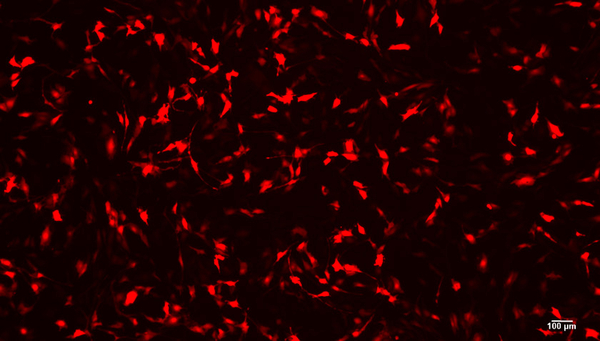 "When I came to Eawag in 2019, I didn't do anything much at first other than to try to get RNA into fish cells," says Marina Zoppo, a postdoctoral researcher at the aquatic research institute Eawag. RNA is a molecule in biological cells that occurs in different forms. Here, the molecular biologist refers to the guide RNA. Its special feature is that it is an important component of the CRISPR/Cas9 system. This molecular biology technique started to revolutionise biology and medicine a few years ago and earned its inventors, Jennifer Doudna and Emmanuelle Charpentier, the Nobel Prize in Chemistry in 2020. The special thing about it is that these "gene scissors" can be used to modify genes much faster and more efficiently than all the techniques known up to that point.

How does CRISPR/Cas9 work?

CRISPR stands for "Clustered Regularly Interspaced Short Palindromic Repeats" - these are certain sections in the genome of bacteria that are repeated multiple times. Cas9 is a protein of these same bacteria. Together, the CRISPR segments and Cas9 form a bacterial defence mechanism against viruses. It works like this: During an infection, the Cas9 protein splits the DNA of the invading viruses into small sequences. These are then inserted between the CRISPR sections of the bacterial genome. If the same virus infects the cell again, it can be quickly recognised and warded off thanks to these DNA fragments.
In genetic engineering, the system is used to mutate genes precisely. The Cas9 protein gets linked to the "guide RNA". This RNA sequence finds the target DNA encoding for the protein of interest in the cell nucleus and binds to it. Cas9 then cuts the DNA of the target organism at this point. This calls the cell's own repair system to the scene, which repairs the break. As this does not always happen without errors, however, a mutation occurs in the target gene. Furthermore, it is possible to introduce additional sequences into the cell with the guide RNA, which are then incorporated into the target gene.

The problem with the cell membrane

While CRISPR/Cas9 has been widely used for mammalian cells to produce genetically modified cells, there was nothing like it for fish. Zoppo, who had completed her doctorate at the University of Pisa in 2018, came to Eawag's Environmental Toxicology department with a clear mission: to establish the method for fish cells, more specifically for cells of rainbow trout.

The researcher brought a lot of experience with the method to Eawag. But she recalls: "I was somewhat surprised by the amazing resistance of the fish cells to manipulation. I had not found this before with any other type of cell". But the reason for this is obvious, explains the biologist: as coldwater fish, rainbow trouts have a different cell membrane composition than mammals do. Their cell membrane is therefore much more rigid. Zoppo accepted the challenge, experimented with electrical voltage and impulses to find the right combination of the two to make the cell membrane permeable for the RNA molecules and proteins (this method is called electroporation). Eventually, she was successful and was able to introduce the guide RNA into the cell along with the Cas9 protein needed for the gene scissors, only to be faced with the next problem.

The cells were taken from the rainbow trout.
(Photo: Andreas Hartl)

The problem with the mutants

The scissors had successfully boarded the cells and worked its magic there: It had precisely located the gene selected by Zoppo on the rainbow trout genome, changed the DNA sequence there and created a so-called knock-out mutation in the gene. This means that due to the mutation in the DNA sequence, the gene could now no longer carry out its usual role in the cell: an excellent experimental system for the researcher to study this very role of the gene. "We observe what happens when a cog in the system fails. In this way, so far poorly understood gene functions can be elucidated," explains Zoppo.

However, there was a small problem. It is one of the properties of the CRISPR/Cas9 system that a gene can be mutated as desired, but: The exact DNA sequence that is created in the process is randomly formed in each cell. "Because we had used several cells for the experiment, each cell now had its own DNA sequence," says Zoppo. The researcher's task was now to pick out a "mother cell" from these and multiply it so that a cell line of genetically identical daughter clones was created. "Here, however, the fish cells again proved to be astonishingly unconventional," says Zoppo. "None of the conventional and widely used methods I knew and tried were applicable here. It just didn't work," says Zoppo.

The breakthrough finally came with an older method using simple cloning cylinders. When cells multiply in culture, they form colonies around the mother progenitor cell, which can be isolated with the cylinder and transferred to another plate. "It's actually quite simple once you get the hang of it," says Zoppo.

Why does Eawag work with fish cell lines?

Marina Zoppo conducted her experiments on the “RTgutGC” cell line. These are cells obtained from the intestine of rainbow trout and further cultivated as a cell line in the laboratory. In toxicological research, i.e. when one observes the harmful effects of environmental influences on organisms, cell lines become increasingly important compared to tests with living animals. This is due to the fact that, on the one hand, animal experiments can be avoided and that, on the other, the cell lines also offer concrete research advantages: They allow processes that are difficult to monitor in live animals to be observed, and the tests are easier to repeat and can be more flexibly designed.
In environmental toxicology, researchers investigate whether the cells of a genetically modified cell line react differently to specific chemicals than the cells of the wild type. This allows them to find out which genes play a role in the response to the chemical by the cell.

By using the method established by Marina Zoppo, researchers in the Department of Environmental Toxicology can now mutate any gene in the rainbow trout to study its function more precisely. "This is a great new genetic tool. It allows me to create a mutant cell line in a few weeks with unprecedented ease and precision. With conventional methods, this used to take several months," notes the researcher.

In the future, she aims at miniaturising the technology. She shows Petri dishes with 24 indentations. A different guide RNA could be inserted into each indentation, thus 24 different genes could be modified simultaneously in each plate. "The plate is then exposed to a chemical and we can see at a glance which mutations play a role in the context of this chemical," Zoppo says in outlining her vision. With this CRISPR/Cas9 genetic screening, which is being used more and more around the world - but not yet with fish cells – ecotoxicological tests will become even faster and cheaper to perform. Not surprisingly, Zoppo wants to establish the method for rainbow trout cells. It might take some time to do so, but she leaves no doubt that she will succeed.

Background: The advent of the Clustered Regularly Interspaced Short Palindromic Repeats (CRISPR)/Cas9 technology marked the beginning of a new era in the field of molecular biology, allowing the efficient and precise creation of targeted mutations in the genome of every living cell. Since its discovery, different gene editing approaches based on the CRISPR/Cas9 technology have been widely established in mammalian cell lines, while limited knowledge is available on genetic manipulation in fish cell lines. In this work, we developed a strategy to CRISPR/Cas9 gene edit rainbow trout (Oncorhynchus mykiss) cell lines and to generate single cell clone-derived knock-out cell lines, focusing on the phase I biotransformation enzyme encoding gene, cyp1a1, and on the intestinal cell line, RTgutGC, as example.
Results: Ribonucleoprotein (RNP) complexes, consisting of the Cas9 protein and a fluorescently labeled crRNA/tracrRNA duplex targeting the cyp1a1 gene, were delivered via electroporation. A T7 endonuclease I (T7EI) assay was performed on flow cytometry enriched transfected cells in order to detect CRISPR-mediated targeted mutations in the cyp1a1 locus, revealing an overall gene editing efficiency of 39%. Sanger sequencing coupled with bioinformatic analysis led to the detection of multiple insertions and deletions of variable lengths in the cyp1a1 region directed by CRISPR/Cas9 machinery. Clonal isolation based on the use of cloning cylinders was applied, allowing to overcome the genetic heterogeneity created by the CRISPR/Cas9 gene editing. Using this method, two monoclonal CRISPR edited rainbow trout cell lines were established for the first time. Sequencing analysis of the mutant clones confirmed the disruption of the cyp1a1 gene open reading frame through the insertion of 101 or 1 base pair, respectively.
Conclusions: The designed RNP-based CRISPR/Cas9 approach, starting from overcoming limitations of transfection to achieving a clonal cell line, sets the stage for exploiting permanent gene editing in rainbow trout, and potentially other fish cells, for unprecedented exploration of gene function.
See DOI
See Institutional Repository
Zoppo, M.; Okoniewski, N.; Pantelyushin, S.; vom Berg, J.; Schirmer, K. (2021) A ribonucleoprotein transfection strategy for CRISPR/Cas9‐mediated gene editing and single cell cloning in rainbow trout cells, Cell and Bioscience, 11(1), 103 (15 pp.), doi:10.1186/s13578-021-00618-0, Institutional Repository