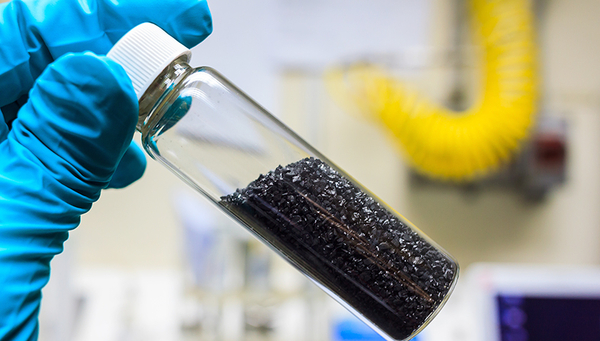 Ozonation is an established treatment process to remove micropollutants from wastewater. However, since unstable toxic reaction products can be formed in the process, biological post-treatment is necessary. Results from the Ecotox Centre and Eawag show how well different post-treatment methods reduce ecotoxicological effects. The combination of ozonation and activated carbon proved to be the most effective.

Through wastewater, rivers and lakes are polluted with numerous micropollutants which originate from care products and pharmaceuticals, among other things. The Waters Protection Act therefore aims to expand Swiss wastewater treatment plants (WWTP) with the addition of a further treatment step. In pilot tests, two processes have proven particularly successful in the removal of trace substances: ozonation and treatment with activated carbon. However, treatment with ozone can produce undesirable reaction products that are potentially toxic. In order to remove these substances from the wastewater, a post-treatment with biological activity is necessary, for which various processes can be used. To assess the efficiency of the different processes, the Ecotox Centre and Eawag compared how well ozonation in combination with the post-treatment processes can reduce ecotoxicological effects. For this purpose, they used bioassays that record the effects of complex mixtures in their entirety. The project was funded by the Federal Office for the Environment and the EU as part of FP7 (Project DEMEAU).

The researchers used cell cultures or unicellular and multicellular organisms such as bacteria, algae or water fleas as bioassay organisms in the laboratory. On the other hand, they studied the rainbow trout and blackworms in flow-through systems directly at the WWTP. “In the assay with early life stages of trout, we investigated not only mortality but also general development parameters such as hatching, buoyancy and length, as well as tissue changes and the expression of pollutant-sensitive genes as biomarkers,” explains Cornelia Kienle from the Ecotox Centre.

The assays were carried out at the Neugut WWTP in Dübendorf, which in 2014 was the first Swiss WWTP to be equipped with a large-scale ozonation plant. As a possible alternative to the existing sand filter at the Neugut WWTP as a biological post-treatment, the researchers investigated a fluidised bed reactor and a fixed-bed reactor in which, as in the sand filter, substances are converted biologically by bacteria in biofilms. In addition, filters with granulated activated carbon (GAC) were examined, both with relatively fresh, only slightly loaded GAC and with GAC that had been in operation for some time and was thus loaded with organic substances. In GAC filters, organic micropollutants are adsorbed onto the carbon on the one hand and on the other hand, are degraded by the biofilm on the GAC. The scientists compared the effect of the wastewater on the cell cultures and bioassay organisms in each case after biological treatment, after ozonation and following the various post-treatments.

This video shows the experimental setup

The test procedures in the laboratory showed that in comparison to the wastewater which had only been treated biologically, ozonation efficiently reduced the toxicity of the wastewater. The toxic effect on luminescent bacteria was reduced by 66 percent compared to biological treatment. Photosynthesis inhibition in the green algae assay was also reduced by 80 percent and growth inhibition by 75 percent. Certain endocrine disruptors were also reduced or eliminated by ozonation. The survival of water fleas was not significantly affected by any of the wastewater samples investigated. In addition, test procedures carried out in the flow-through system at the WWTP showed that the effluents also had no effect on the survival and reproduction of blackworms. The development and survival of early life stages of rainbow trout also showed no differences between wastewater after ozonation and wastewater that had only been treated biologically.

Ozonation is a proven method for removing trace substances from water. In the picture: Ozone diffusers at the Neugut WWTP in Dübendorf.
(Photo: Aldo Todaro, Eawag)

The residual toxicity of the wastewater after ozonation is very low, i.e. treatment with ozone had already brought about a significant improvement. Only in isolated cases, for example, was a low mutagenic effect detected. These negative effects could be further reduced or eliminated by the various post-treatment processes. After the fresh GAC filter, the effects in the photosynthesis inhibition test were reduced by a further 66 percent. This is probably due to additional removal of micropollutants by the GAC filter. The loaded GAC filter also brought a slight improvement. Overall, however, the low residual toxicity after ozonation made it difficult to assess additional effects of the post-treatment in the bioassays. The results for the sand filter, fluidised bed and fixed-bed post-treatments were inconsistent and did not enable any conclusion to be drawn.

A tissue analysis of rainbow trout conducted at the University of Tübingen showed that after ozonation, the tissue condition of trout livers was still worse than in unstressed control animals. Treatment with fresh GAC resulted in better tissue condition, while the other post-treatments did not lead to any detectable improvement. Environmental toxicologist Stephan Fischer from Eawag also investigated biomarkers at the gene expression level in the trout. These indicate whether and to what extent organisms react to different groups of pollutants. The biomarkers studied are involved in reactions such as general stress response, oxidative stress, conversion of foreign substances, regulation of the immune system, hormonal activity and reactions with heavy metals. Most biomarkers were elevated after the biologically treated wastewater. Ozonation reduced this signal. The different post-treatments achieved further changes in the biomarker patterns, making them more similar to those of the control trout, but less clearly different from each other. The most significant positive effect was after the relatively fresh GAC filter or after the fixed bed.

The bioassays used confirmed that ozonation significantly reduces the pollutant load of the wastewater and thus ecotoxicological effects at the Neugut WWTP. Since the wastewater was only very slightly toxic after ozonation, hardly any differences in the efficiency of the various post-treatments could be shown. Summarising the results of the bioassays, only the fresh GAC filter provided a significant additional cleaning performance to ozonation, which is probably due to the additional removal of micropollutants by sorption to the filter. In further post-treatments, no consistent improvement could be demonstrated with most of the methods used. Isolated mutagenic effects were reduced by all post-treatment processes, indicating their efficiency in removing labile reaction products.

In principle, biological post-treatment is required in Switzerland after ozonation to reduce the biodegradable dissolved organic carbon and potentially toxic products generated during ozonation. This study has shown that the combination of ozonation and activated carbon (GAC filter) achieves the greatest reduction of ozonation reaction products and ecotoxicity in the treated wastewater. This treatment combination has become increasingly important in recent years and is already being used at the Altenrhein wastewater treatment plant in Switzerland.

Micropollutants present in the effluent of wastewater treatment plants (WWTPs) after biological treatment are largely eliminated by effective advanced technologies such as ozonation. Discharge of contaminants into freshwater ecosystems can thus be minimized, while simultaneously protecting drinking water resources. However, ozonation can lead to reactive and potentially toxic transformation products. To remove these, the Swiss Federal Office for the Environment recommends additional "post-treatment" of ozonated WWTP effluent using sand filtration, but other treatments may be similarly effective. In this study, 48 h composite wastewater samples were collected before and after full-scale ozonation, and after post-treatments (full-scale sand filtration, pilot-scale fresh and pre-loaded granular activated carbon, and fixed and moving beds). Ecotoxicological tests were performed to quantify the changes in water quality following different treatment steps. These included standard in vitro bioassays for the detection of endocrine, genotoxic and mutagenic effects, as well as toxicity to green algae and bacteria, and flow-through in vivo bioassays using oligochaetes and early life stages of rainbow trout.
Results show that ozonation reduced a number of ecotoxicological effects of biologically treated wastewater by 66 - 93%: It improved growth and photosynthesis of green algae, decreased toxicity to luminescent bacteria, reduced concentrations of hormonally active contaminants and significantly changed expression of biomarker genes in rainbow trout liver. Bioassay results showed that ozonation did not produce problematic levels of reaction products overall. Small increases in toxicity observed in a few samples were reduced or eliminated by post-treatments. However, only relatively fresh granular activated carbon (analyzed at 13,000 - 20,000 bed volumes) significantly reduced effects additionally (by up to 66%) compared to ozonation alone. Inhibition of algal photosynthesis, rainbow trout liver histopathology and biomarker gene expression proved to be sufficiently sensitive endpoints to detect the change in water quality achieved by post-treatment.
See DOI
See Institutional Repository
Kienle, C.; Werner, I.; Fischer, S.; Lüthi, C.; Schifferli, A.; Besselink, H.; Langer, M.; McArdell, C. S.; Vermeirssen, E. L. M. (2022) Evaluation of a full-scale wastewater treatment plant with ozonation and different post-treatments using a broad range of in vitro and in vivo bioassays, Water Research, 212, 118084 (13 pp.), doi:10.1016/j.watres.2022.118084, Institutional Repository

Created by Anke Schäfer, Annette Ryser
Share with others: