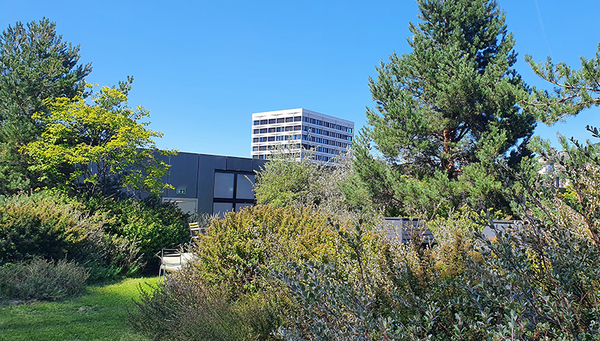 The Aqua Urbanica symposium, co-organised by Eawag, explored the question of what is needed to implement the sponge city concept. With the help of this concept, cities should be able to mitigate the consequences of climate change.

Heat waves and extreme rainfall - the consequences of climate change are causing problems for cities. Urban drainage, for example, is facing new demands: in future, it should not only be able to cope with more frequent heavy rainfall, but also to make hot spells more bearable. Against this background, the Aqua Urbanica took place on 14 and 15 November 2022 in Glattfelden near Zurich.

The conference is aimed at experts from Germany, Austria and Switzerland. Traditionally, they come from the fields of urban water management and research, but the event is increasingly addressing urban and landscape planners, public authorities and green space departments. This was already made clear by the conference title: “Green instead of grey - planning the urban drainage of the future together with blue-green infrastructures.”

Intelligent “watering” instead of merely draining away

As the fully-booked conference showed a paradigm shift is currently taking place in urban drainage. Keywords for this are “sponge city”, “climate-adapted stormwater management” and “green infrastructure”. “In the future, we will perhaps no longer speak of urban drainage, but of urban irrigation,” says Jörg Rieckermann from Eawag’s Urban Water Management department, one of the organisers of the conference. The task of urban drainage can no longer be merely to discharge water. In Switzerland, unpolluted rainwater has long since ceased to belong in the sewage system but instead is allowed to seep away. Several speakers demanded, however, that it be used in a more targeted way in the future, for example to irrigate green space and trees that provide shade.

This year’s Aqua Urbanica was supported not only by Eawag, but also by the Swiss Water Association (VSA) and its partner organisations in Germany and Austria. The professional organisations want to help the blue-green infrastructures achieve as breakthrough with the new guidelines and recommendations, among other things. “It is now a matter of implementing in practice concepts that have been established in research,” explains Jörg Rieckermann. At the conference, the VSA presented the strategic initiative “Sponge city”. Objective of the project: to develop support services and standards to enable municipalities to “shape the future in climate-adapted way”. Elements of such rainwater management include green roofs, irrigation swales, rainwater storage, ponds and near-natural green and open space areas that slow down or completely prevent surface runoff. The sponge city concept is therefore not only an answer to climate risks such as heavy rain and heat waves, but it also increases the quality of life and promotes biodiversity.

Retention and infiltration of rainwater in planted trenches (left); park with trees in the inner courtyard above an underground garage (Photos: Brigitte Kisseleff, ERZ)

At the conference, the example of the Oxford neighbourhood in the German city of Münster showed how an entire district with elements of a sponge city can be recreated when the various disciplines pull together in the planning process. Housing for 10,000 people is being built there on the site of a former military barracks. The water management concept of a new neighbourhood is based on an integral approach in which water management, urban planning and drainage planning have worked together very closely right from the beginning. The objective is a near-natural water balance, i.e. the right mix of evaporation, infiltration and drainage of precipitation.

In the view of Eawag specialist Jörg Rieckermann, this major project is exemplary because the new approaches to urban water management were incorporated into the planning process at an early stage. “If it doesn’t happen from the beginning,” he stresses, “it is too late.” At the Aqua Urbanica, it was agreed that the key success factor for the sponge city is interdisciplinary cooperation.

What the conference also showed: The positive effects of the concept on the water balance can be proven. Long-term monitoring of retention green roofs in Hamburg, for example, showed that up to 80 percent of precipitation was retained on the roofs and evaporated. In contrast to conventional green roofs, so-called blue-green roofs are provided with an additional retention layer. Other benefits proven in Hamburg: Permanently storing rainwater on the roof is good for biodiversity. And: The cooling effect of evaporation on the surroundings is increased and can also be maintained during dry periods. Finally retention roof greening is also economically interesting. Although the construction costs are significantly higher, if the rainwater is retained on the roof, it does not need as many installations to dispose of it on the ground.

Integral drainage planning is a complex undertaking in which planners depend on modelling and corresponding data that are as close to reality as possible - this was another focus of the conference. Lauren Cook, for example, who conducts research on blue-green infrastructures at Eawag, presented a stochastic rainfall generator that should be able to provide a better basis for planning in the future, for example to take into account the influence of climate change. This should enable practitioners to assess whether their urban drainage systems will be able to cope with future developments.

Research is also needed in other respects for the implementation of the sponge city concept. In the view of several speakers, for example, far too little is known about the consequences when micropollutants seep away with the rainwater. And the distribution and intensity or rain within a city must also be better recorded. But completely different research projects are also being discussed. “We want to know which levers we have to use so that implementation is most successful,” says May Maurer, leader of the group “Water Infrastructures” and Professor of Urban Water Management Systems at the ETH Zurich. Should one start with zoning? Or first with the legal provisions? Which departments in a municipality need to work better together? Such questions, it is thought at Eawag, which is strongly influenced by natural scientists, could perhaps best be answered by social or political scientists. The topic of blue-green infrastructures demands interdisciplinarity not only in implementation, but also in science.

Cover picture: Rooftop garden areas, such as this one on the 6th floor of the Toni Molkerei (dairy) site in Zurich, can contribute a great deal to water retention in the city (Photo: Brigitte Kisseleff, ERZ)

Videos of the presentations will follow on the You Tube channel.