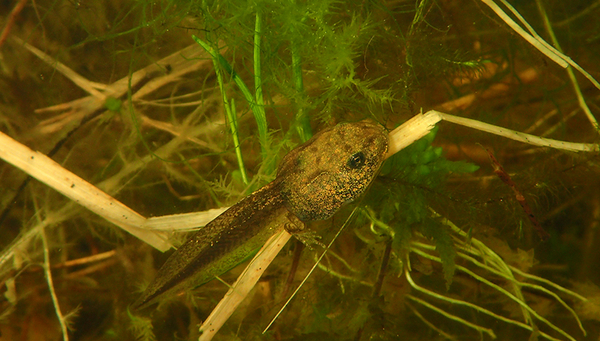 Natural environments vary in space and time and are now drastically changing due to human activities. Environmental changes, like increasing acidity in a pond, can strongly affect the long-term prospects of species. Katja Räsänen from Eawag’s department Aquatic Ecology aims to understand how natural populations of the moor frog adapt to environmental change.

Organisms exposed to challenging environments face evolutionary pressure to adapt, which could lead to modifications in a variety of traits, such as morphology, physiology and behaviour. Katja Räsänen from the Swiss Federal Institute of Aquatic Science and Technology Eawag holds a deep interest in mechanisms of adaptation in natural populations.

She studies the moor frog, Rana arvalis, a species which is found in parts of Europe and Western Siberia. “We’re using the moor frog as our main model system to look at the broader question of how natural populations adapt to environmental change,” she outlines. This species is important in pond ecosystems, where they play a number of ecologically significant roles. “In addition to consuming resources, they are also a food for predators and a host for parasites. They also play an important role in transmitting nutrients between aquatic and terrestrial environments,” says Räsänen.

As the Principal Investigator of a long running research project looking at the moor frog, Räsänen aims to probe deeper into the underlying factors behind how this species adapts to environmental acidification. To do so, her team studies several different populations of the moor frog along an acidification gradient in Sweden, with pond pH levels ranging from 4 to 7.3. “Amphibians – including the moor frog – are studied because of their ecological importance and sensitivity to environmental change. We want to look at the bigger picture,” says Räsänen.

One aspect of this research involves looking at the impact of both natural and human induced acidification, which leads to natural selection in many traits across the whole lifecycle of the moor frog, right from the early stages.

Acidification can cause mortality and affect development of amphibians, while also leading to changes in the distribution of predators. “Embryonic stages are very heavily affected by acidity. A range of studies over decades have demonstrated that amphibian embryos in acidified waters often fail to hatch,” explains Katja Räsänen. The evidence suggests that changes in the coats which surround embryos (i.e. egg coats) prevent them from hatching. This is thought to be due to a maternal effect, a topic that Räsänen has studied extensively over the course of her career. “Interestingly, moor frog mothers from acidified environments produce egg coats with an altered molecular composition, which increases embryonic survival in acidified water,” she says.

In tadpoles, both acidity and predators cause natural selection. “The classic defence traits in tadpoles are related to behavior and morphology. In some environments, for example, it may be beneficial for a tadpole to grow rapidly as it reduces the risk of predation from predators that cannot eat larger tadpoles,” explains Räsänen.

By studying different populations of the moor frog along the acidification gradient, where the abundance of invertebrate predators increases as the acid concentration rises (whereas fish and newt predators can disappear), the team hopes to build a deeper picture of how different stressors influence adaptation.

A tadpole’s tail morphology is a classic defence trait; a deeper tail may affect the tadpole’s swimming behaviour and improve its defences against predators. “Invertebrate predators, like dragonfly larvae, may be more likely to grab the tail, rather than the vital main body, when the tail is relatively large,” explains Dr Räsänen. The higher abundance of invertebrate predators in acidified ponds can lead to selection for deeper tails. “Our previous research showed that tadpoles from populations from acidic environments have deeper tails and higher survival rates when encountering predators than those from neutral pH environments. Based on laboratory experiments, there is likely a genetic basis to this morphological divergence,” continues Räsänen.

In addition to consuming resources, Rana arvalis are also a food for predators and a host for parasites. They also play an important role in transmitting nutrients between aquatic and terrestrial environments.https://www.eawag.ch/typo3/#_msocom_1

The current aim of Eawag and the Uppsala University team is to probe deeper into the underlying factors behind morphological and behavioural divergence in tadpoles. “We are trying to understand the extent to which stress hormones, such as corticosterone, allow species to adapt relatively rapidly to acidification and correlated environmental changes – which can then lead to multidimensional change,” says Räsänen. This work holds wider importance for understanding how organisms are likely to adapt to environmental change in future.

“Understanding how the moor frog adapts to environmental stress is essential if we are to forecast what might happen in the future,” stresses Räsänen. Predicting what may happen in future is a challenging task, and there are many uncertainties, yet Räsänen believes it is possible to make certain forecasts. “We can forecast whether or not there is the potential for certain responses in the moor frog. The specific effects that these changes will then have is more difficult to forecast – it’s also important here to consider other simultaneously changing factors and the natural history of these populations,” she continues.

While much of the team’s work has centred on the moor frog itself, the species is also an effective model for understanding general adaptation mechanisms, so the project’s work holds wider relevance. “It does tell us about the general processes that might be taking place in response to changing environments and different environmental stressors,” outlines Dr Räsänen. A deeper understanding of these evolutionary processes could prove important also in the management of natural populations. “We do different laboratory experiments to causally link different driving factors,” says Räsänen. “In terms of management, it’s important to recognize that the populations that we see of any given species are not actually identical.”

These differences among populations need to be taken account in the development of management strategies, while it’s also important to consider the wider objectives. If the goal is to restore specific populations of a particular species for example, then it’s important to know what type of selection pressures they have historically been exposed to. “Understanding the evolutionary history of any specific population in a species matters for their ability to cope with different changes” explains Katja Räsänen.