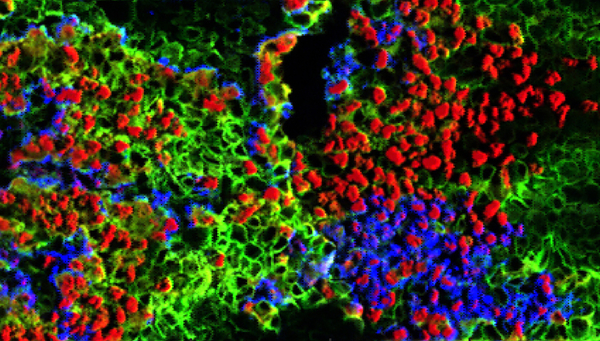 In many regions of the world, groundwater is contaminated with arsenic of natural origin. The harmful substance can be filtered out of water with the help of iron. Eawag researchers have for the first time made visible exactly what happens in this process in a new type of experimental set-up.

When metallic iron corrodes, i.e. rusts, iron oxides are formed that can strongly bind pollutants such as arsenic. Simple and inexpensive water filters are based on this principle, which people in the affected regions of Africa and Asia can use to treat arsenic-contaminated drinking water. Iron powder, iron filings or iron nails are used, often in combination with sand. Much research has been done in recent years on the efficiency of these filter methods, including at Eawag in Bangladesh. “Previous studies on this topic have one drawback, however,” says Andreas Voegelin, head of the Molecular Environmental Geochemistry group in Eawag’s Water Resources and Drinking Water (W + T) department. “The reactions between arsenic and iron are usually investigated in suspensions in which the filter material is floating in the water. However, the results do not show which processes take place in the pore space, i.e. the cavities between the individual solid particles of a filter.+ The researchers from the W +T department were particularly interested in how arsenic removal is influenced by the periodic operation of a water filter, i.e. when water flow and water accumulation alternate.

The work groups of Andreas Voegelin, Joaquin Jimenez-Martinez, Stephan Hug and Michael Berg wanted to explore this question in a joint experiment that combined all their expertise. Environmental engineer Jonas Wielinski, who did his doctorate at Eawag, took on the challenging tasks and developed an experimental set-up that reproduces the conditions in an arsenic filter as well as possible and makes them visible. “Our objective was to observe and understand the geochemical processes in the pore space between iron particles and sand grains on the scale of micrometres,” says Wielinski, who is now a postdoctoral researcher at Carnegie Mellon University in the USA.

The experimental setup consisted, from left to right, of a pump, an optical microscope under which the filter model was placed, a fraction collector for analysing the filtered water and the screen on which the images from the microscope could be seen.

Miniature filters under the microscope

Under an optical microscope in Jimenez-Martinez’s microfluidics laboratory, Wielinski examined an arsenic filter in miniature: a channel only 250 micrometres deep and 45 millimetres long, filled alternately with strips of quartz sand and iron grains. The researchers added arsenic and other elements to the water used to run the filter model in concentrations typical of groundwater in Bangladesh. The pump connected to the filter pumped water through the system for twelve hours at a time, followed by a twelve-hour break, during which the water rested in the filter. Wielinski regularly sampled the filtered water during the experiment, which lasted several weeks, to determine the removal of the arsenic. With the optical microscope, he automatically took a picture of the filter model every 30 minutes. Played back in fast motion, these images show in detail how the metallic iron corrodes and how the newly-formed iron oxides change colour in cycles - from green-black to orange-red and brown when the water is flowing and vice.-versa when the water stops. These colour changes are a consequence of the corrosion processes, in the course of which various iron oxides are formed and cyclically transformed.

Video: Played back in fast motion, the images from the optical microscope show how iron grains change in colour in the course of the corrosion process, depending on whether the water is flowing or accumulating. At the sites marked M1−M6 marked in green, the researchers observed the cyclic transformations of the iron oxides, the particle transport and the formation of gas bubbles.

After the end of the experiment, the filter model was analysed by X-ray microscopy to determine the type and distribution of the iron oxides and the arsenic bound to them. By combining these results with the colour changes observed in the optical microscope, the researchers were able to understand in detail the dynamic formation and transformation of the iron oxides in the filter and their effect on arsenic removal.

“With this new experimental set-up, we were able to visually demonstrate how the distribution of the iron and quartz sand grains and the water flow through the filter influence the spatial and temporal sequence of the arsenic removal,” says Wielinski. In particular, the alternation between water flow and water accumulation had a positive effect on the filter performance. “A realisation that is useful in the further optimisation of such filters,” he notes and adds: “The set-up developed in this study also has great potential for researching other biogeochemical processes in porous media such as groundwater aquifers or soils.

Cover picture: The researchers were able to use the experiment to show when and where arsenic and other elements from the water were bound to the iron. (Foto: Eawag)