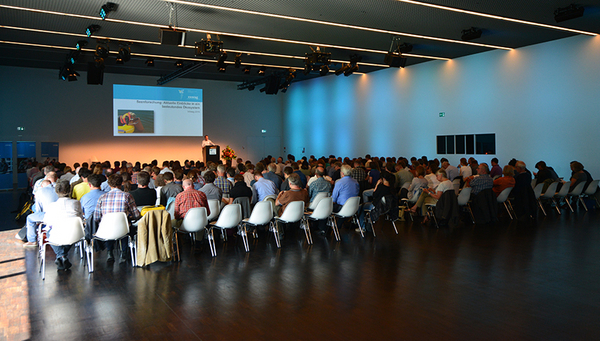 Switzerland’s lakes are not only diverse ecosystems, but also recreation sites, fishing grounds and energy sources. At this year’s Info Day, the tensions between these competing interests were explored. It was concluded that sustainable management calls for an understanding of the complex interactions occurring in lakes – which in turn requires scientific data and appropriate methods of observation. By Andres Jordi

Today, Swiss lakes are subject to a wide variety of demands with regard to resource use and conservation. A scientific approach to lake management should take these diverse needs into account, rather than favouring any particular interests or stakeholders. The prime goal, however, according to Eawag researcher Bernhard Wehrli, must be to ensure that the ecological functioning of lakes – and their status as near-natural habitats – is preserved or restored. Wehrli was one of the speakers at this year’s Eawag Info Day, which – to mark the centenary of the Kastanienbaum hydrobiology laboratory – was held at the Transport Museum in Lucerne. The event, attended by around 250 scientists, water professionals, administration officials and policymakers, focused on new insights and trends in lake research, and their implications for practice (Fig. 1).

The variety of demands referred to by Wehrli was reflected by the thematic diversity of the presentations: lake ecosystems were considered from a range of perspectives including biodiversity protection, energy production, fishery use and water quality. The presentations highlighted the importance of systematic data collection. Data on the physical, chemical and biological condition of a lake – and how this may change in response to external factors – is indispensable for sustainable management. In the absence of data, decisions cannot be made on a sound scientific basis.

Until recently, as evolutionary biologist Ole Seehausen pointed out, no quantitative data on fish communities, collected by standardized methods, was available for large, deep prealpine waterbodies such as Lake Thun or Lake Walen. Seehausen said: “If biodiversity and habitats are to be preserved or enhanced in a targeted manner, a comprehensive inventory of species is required.” For this reason, in 2010, Eawag –in collaboration with the Federal Office for the Environment and Bern University – launched “Projet Lac”, to collect data for as many lakes as possible. The aim was to document fish diversity, the situation of endemic and threatened species, and important trends for fish stock management.

Projet Lac showed that human activities have had a major impact on prealpine lakes. These ecosystems are now characterized by changes in nutrient levels and oxygen supplies, the loss of endemic species and the spread of exotic species. Altogether, the surveys revealed the presence of more than 70 fish species (Fig. 2): whitefish predominate down to the greatest depths, but only in the cleanest lakes. Perch and carp are the dominant species in lakes which are currently or were formerly eutrophic. Most of the lakes affected by eutrophication in the past have lost their deep-water species. In Lake Zug, for example, which is 197 metres deep, hardly any fish are found below a depth of 30 metres. At the same time, these lakes appear to be particularly rich in exotic shallow and warm-water species. Seehausen concludes: “Biodiversity and ecosystems are thus undergoing a process of homogenization in Swiss lakes.” But Projet Lac also offered some good news: the biologists discovered several specimens of the deep-water char (Salvelinus profundus), endemic to Lake Constance, which had previously been declared extinct.

Fig. 2: Char are the most abundant species in small, higher-altitude lakes, and whitefish in deep, oligotrophic lakes. Perch, carp or stickleback predominate in formerly or currently eutrophic lakes.

In another presentation, sedimentologist Nathalie Dubois explained how data from sediment cores can provide a window onto the past: “Over time, different substances are deposited on the lake bed, depending on local factors. By examining these layers, we can obtain valuable information on the development of a region.” Using a ten-metre-long sediment core, she and her colleagues were thus able to reconstruct the history of land use around Lake Murten (Fig. 3). The scientists demonstrated that lake eutrophication is not a purely modern phenomenon. Some 2300 years ago, the Romans began to clear large areas of forest around Lake Murten. This left traces in the sediments: within a short period, large amounts of soil were washed into the lake, leading to substantial inputs of nutrients. Eutrophication only declined after the fall of the Roman Empire and the onset of a colder climate during the Middle Ages. According to Dubois, sediment analysis is a highly promising approach for reconstructing the impacts of past human activities on a region. In addition, it can provide evidence of how contemporary activities influence the environment or climate – or the resilience of ecosystems to disruptions.

Fig. 3: Humans have left numerous traces in the sediments of Lake Murten. Using sediment cores, researchers can reconstruct the history of human settlements in the region and study their effects on the environment.

Another point clearly emerging from Eawag’s Info Day was the importance of state-of-the-art research methods in ensuring that the relevant data can be collected and appropriately assessed. In this respect, according to Wehrli, lake research has benefited from a number of quantum leaps over the last few decades, which mean that we are now in a position to “take the pulse” of a lake using measurements with high spatial and temporal resolution. For example, mathematical models make it possible to predict in detail how lakes respond to disturbances; isotope labelling can be used to track the passage of contaminants through food webs; and molecular genetic analysis facilitates studies of species evolution, as well as biodiversity monitoring (Fig. 4).

Michael Schaepman of Zurich University discussed the possibilities of remote sensing. Modern satellites – which, at an altitude of 800 kilometres, can detect objects as small as 3 metres – not only make it possible to measure the extent of lakes. Thanks to their high spectral resolution, these systems can also provide information on water quality. Remote sensing, operating beyond the visible-light spectrum, makes it possible to determine the absorption properties of water and thus to calculate concentrations of suspended particles, chlorophyll or coloured dissolved organic matter in water.

To investigate the migration of fish between Lake Lucerne and its tributaries, a research team led by fish biologist Jakob Brodersen implanted microchips in more than 5000 brown trout. The signals received from these so-called PIT tags indicate when the young fish migrate from the streams into the lake, and when the adults return to the spawning grounds. The initial results show that the proportion of migratory individuals in the various populations ranges from 5 to over 50 per cent. The timing of migration can also vary by more than two months. “This differs from one canton to another,” Brodersen quipped. “For example, denizens of canton Uri are tardier than in Canton Nidwalden.” The returning fish also differ markedly in size, measuring between 25 and 70 centimetres in length. According to Brodersen, measures to conserve and sustainably manage this species – which is endangered in Switzerland – would need to take these differences into account, e.g. when minimum catch sizes are specified for fisheries.

Collaboration with practitioners vital for implementation

The Info Day underlined the complexity of the interactions occurring in lake ecosystems – and the fact that these need to be understood if the wide variety of resource use and conservation demands are to be reconciled over the long term. Another key requirement is dialogue between researchers and practitioners (Fig. 5). For example, the federal authorities’ planning instruments for the revitalization of Swiss lakes are partly based on collaboration with Eawag. Gregor Thomas of the Federal Office for the Environment presented the new method for ecomorphological assessment of lakeshores and the enforcement aid currently being developed for the cantons. The latter are required to submit their strategic plans for revitalization measures by 2022.

Werner Göggel, head of the Waters Department at Canton Lucerne’s Environment and Energy Office, said he was impressed by the close links existing between Eawag research and practice. “Without the scientific support provided by Eawag,” he added, “it would not be possible for cantonal agencies to carry out their enforcement tasks with this standard of quality.”

Fig. 5: One of the main aims of Eawag’s annual Info Day event is to promote exchanges between researchers and practitioners. (Photos: Peter Penicka)