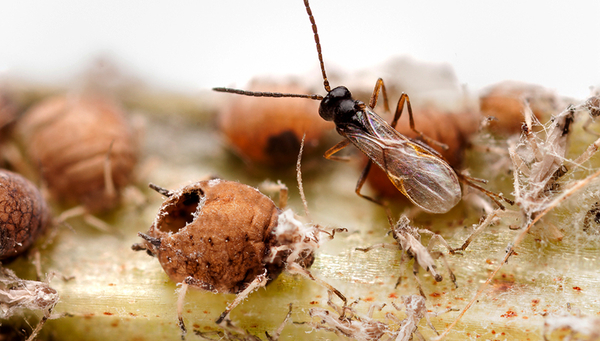 Often overlooked until now: symbioses could be a driving force for the emergence of biodiversity. A case where bacteria live in aphids shows that this can even have practical implications for biological pest control.

Symbiotic relationships are not as rare as we sometimes think. Symbiosis is widespread in nature, for example in aphids. This refers to the close coexistence of two species that partially benefit from each other. For instance, the black bean aphid (Aphis fabae) harbours the bacterium Hamiltonella defensa in its body. These bacteria, which Prof. Christoph Vorburger from the aquatic research institute Eawag is studying, benefit from the aphid as a habitat. Because they live inside the host organism, they are also called endosymbionts (Greek “endon”: inside). “In return, they provide the aphid with a kind of additional defence mechanism to protect it against parasites,” says Vorburger, Head of the Aquatic Ecology Department and Adjunct Professor at the ETH Zurich.

In a review in the renowned journal Annual Review of Entomology, he shows how the toxins produced by the bacteria likely kill the eggs of the tiny, parasitic ichneumon wasp, (Lysiphlebus fabarum). This saves the aphid’s life, as otherwise larvae would hatch from the eggs and eat the aphid from the inside. For the aphids, this additional defence mechanism is so important that the mother can even pass the bacteria on to her offspring. Vorburger therefore refers to endosymbionts as a kind of additional level of biodiversity.

Vorburger has been researching the relationship between aphids and ichneumon wasps for a long time. His research joins a tradition of host-parasitic research at Eawag that also includes aquatic snails and water fleas. So far, little attention has been paid to the issue of the third member of the group: the endosymbionts. “And especially its impact on biodiversity,” says Vorburger. Endosymbionts would not only represent a form of biodiversity themselves, but would additionally promote the emergence of biological diversity in ichneumon wasps.

To investigate this, researchers from his team have replicated evolution in a simple form in the laboratory. This is called experimental evolution. To do this, they made two groups of aphids, each infected with a different strain of the bacterium, Hamiltonella defensa. For many generations, the aphids were kept together with ichneumon wasps, which tried to infest the aphids as parasites. At first, they had only moderate success. Thanks to the bacterial toxins, the aphids had reliable protection. “Most of the wasps died – but not all of them,” says Vorburger. And the number of surviving wasps increased from generation to generation. “The experiment selected those wasps which, purely by chance, coped best with the toxin. They then passed this ability on to their descendants, so that we ended up with a wasp population that was very well adapted to the toxin,” explains the biologist.

“What is new is that the parasite here does not adapt to the actual host, but to its endosymbiont.”
Christoph Vorburger

Interestingly, however, this only applied to the particular strain of bacteria to which it was exposed. Both wasp populations had therefore only adapted to “their” toxin. When the researchers switched them, the adaptation was of no use to them and they had no chance against the toxin of the other strain. “For a long time, we have known about this evolutionary arms race between host and parasite, where both are always evolving further,” says Vorburger. “What is new, however, is that the parasite here does not adapt to the actual host, i.e. the aphid, but to its endosymbiont, and that this adaptation leads to a specialisation of the parasites.” Endosymbionts can thus be understood as a force that drives evolution and increases genetic diversity in the aphids’ natural enemies, the ichneumon wasps.

This could have very practical implications. The aphids studied by Vorburger are well-known pests in food cultivation, especially in greenhouses, and are among the main agricultural pests worldwide. The parasitic ichneumon wasps have therefore been used in pest control as an alternative to insecticides for quite some time. “However, we repeatedly observe cases where control via wasps works surprisingly poorly,” says Vorburger. It is therefore quite possible that in this case the aphids harbour a strain of bacteria to which the wasps are not adapted. In the future, he said, one would have to consider whether specially adapted wasps could be bred for this purpose.

Symbiotic relationships as protection against parasites and as a driving force for evolution: the described mechanism is likely to play a role not only in insects, but is more widespread in nature than one might think.

Defensive symbionts and the evolution of parasitoid host specialization

Insect host–parasitoid interactions abound in nature and are characterized by a high degree of host specialization. In addition to their behavioral and immune defenses, many host species rely on heritable bacterial endosymbionts for defense against parasitoids. Studies on aphids and flies show that resistance conferred by symbionts can be very strong and highly specific, possibly as a result of variation in symbiont-produced toxins. I argue that defensive symbionts are therefore an important source of diversifying selection, promoting the evolution of host specialization by parasitoids. This is likely to affect the structure of host–parasitoid food webs. I consider potential changes in terms of food web complexity, although the nature of these effects will also be influenced by whether maternally transmitted symbionts have some capacity for lateral transfer. This is discussed in the light of available evidence for horizontal transmission routes. Finally, I propose that defensive mutualisms other than microbial endosymbionts may also exert diversifying selection on insect parasitoids.
See DOI
See Institutional Repository
Vorburger, C. (2022) Defensive symbionts and the evolution of parasitoid host specialization, Annual Review of Entomology, 67, 329-346, doi:10.1146/annurev-ento-072621-062042, Institutional Repository