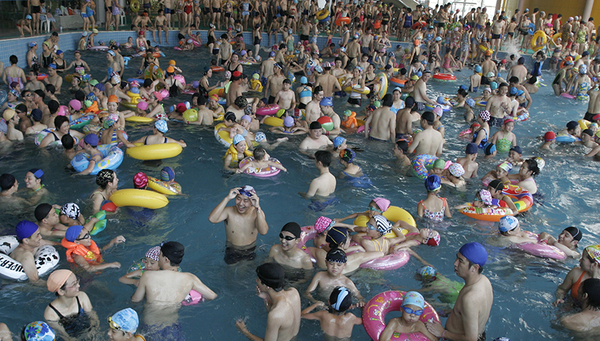 Chlorination of water in swimming pools leads to the formation of trichloramine, a potentially harmful compound. How much of this by-product is formed depends on the amount of chlorine in the water – but chlorine concentrations cannot be significantly reduced without causing sanitary problems. The benefits of UV irradiation are also limited.

Once again, the bathing season is almost upon us. To ensure that swimmers (and non‑swimmers) have a safe and enjoyable experience, public pools have to meet strict water-quality standards. As contaminants such as hair, skin flakes, sweat and urine – but also bacteria and viruses – are inevitably introduced by pool users, the water in public pools is continuously filtered and disinfected. The most commonly used disinfectant is chlorine, usually applied in the form of hypochlorous acid or calcium hypochlorite. But, as environmental chemist Fabian Soltermann of Eawag’s Water Resources and Drinking Water department points out, chlorination also has a downside: “Several hundred compounds are formed as by-products.” In many cases, the effects of these substances are unknown, but some can be harmful to health or even (at critical concentrations) carcinogenic.

Among the disinfection by-products of concern is trichloramine, which can irritate the skin, eyes and respiratory tract and has been implicated in the development of asthma. Pool staff, swimming instructors and young children are believed to be particularly at risk. Trichloramine is formed when chlorine in pool water reacts with nitrogenous compounds such as urea. A certain amount is released as a gas, which can accumulate in enclosed spaces. Soltermann explains: “The trichloramine issue mainly arises at indoor pools. At outdoor pools, there’s plenty of fresh air, and the compound is also broken down by sunlight.” A legal limit has yet to be specified in Switzerland. In practice, however, a standard issued by the Swiss Society of Engineers and Architects – SIA 385/9 – is widely employed. The SIA recommends an upper limit of 0.2 milligrams of trichloramine per cubic metre of air. According to a study published in 2012, this level was exceeded at 5 of 30 indoor pools investigated in Switzerland.

If exposure to trichloramine is to be minimized, it is important to understand how the compound is formed in water. For his doctoral dissertation, Fabian Soltermann developed a low-cost, readily applicable method for measuring trichloramine in pool water. Using this method, he was able to identify factors that influence the production and degradation of the substance. His study involved a total of 30 different pools at a number of indoor swimming facilities in Switzerland. At one facility, long-term measurements were performed in various pools [Fig. 2].

Trichloramine concentrations were found to lie between 2 and 58 micrograms per litre. Analyses indicated that trichloramine levels mainly depend on the content of “free chlorine” in pool water [Fig. 3]. This term refers to dissolved chlorine gas or dissolved hypochlorite compounds, while “combined chlorine” designates compounds – like trichloramine – which contain nitrogen as well as chlorine. To a certain extent, trichloramine production is also influenced by the number of people using a pool: in the pools where more detailed measurements were made, concentrations increased with the number of users. However, while it may be tempting to attribute the increase to rising levels of urea in the water, this does not appear to be the explanation. Soltermann reports: “I couldn’t detect any statistically significant association between trichloramine concentrations and the content of urea in pool water. A more important role is probably played by other nitrogenous compounds – but we don’t yet know which.”

According to Soltermann, reducing the amount of chlorine added to pool water would be an effective way of lowering trichloramine concentrations. However, compared to other countries such as France, Germany or the US, chlorine concentrations in Swiss pools are already fairly low. Here again, swimming pool operators are guided by SIA 385/9, which recommends a value of 0.2–0.8 milligrams of free chlorine per litre so as to ensure appropriate water quality. “This means pool operators face a dilemma,” says Soltermann. “If chlorine levels are reduced, they run the risk of failing to meet water-quality requirements; with the current regime, they have to accept higher trichloramine concentrations.”

At some facilities, in order to reduce unwanted disinfection by-products, pool water is additionally treated with ultraviolet light. Soltermann confirmed in laboratory experiments that, with a standard UV dose, trichloramine concentrations can be reduced by half. But under real-life conditions, the situation is different. While a reduction of around 50 per cent was also measured at the UV reactor of an indoor facility, the effect declined markedly once the water was recirculated: the reduction observed in the wading pool was only 20 per cent – and a mere 10 per cent in the swimming pool [Fig. 4]. Soltermann explains: “This is related to the residence time of the water in the pool. The longer the water remains, the more trichloramine can be produced again.” In the wading pool, the water is replaced every hour; in the swimming pool, every four or five hours.

The study suggests that UV irradiation can at best reduce the concentration of combined chlorine. Here, too, a guide value is recommended by the SIA (0.2 milligrams per litre). “Some indoor pools have difficulty complying with this value,” says Soltermann. At any rate, in the case of combined chlorine, only trichloramine is relevant for health. In addition, depending on the particular pool water conditions, UV irradiation can also promote the formation of other problematic by-products, such as nitrosamines.