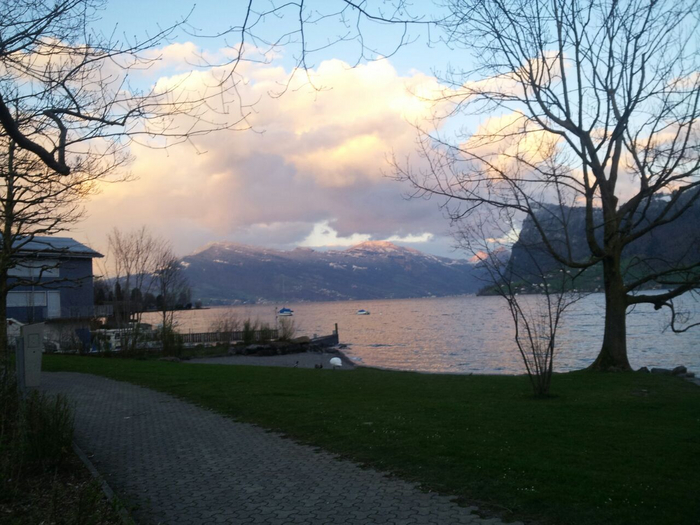 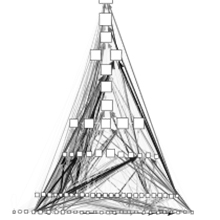 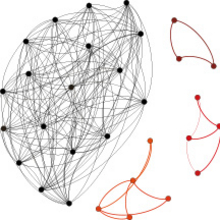 Deciphering the interdependence between ecological and evolutionary networks

Biological systems consist of elements that interact within and across hierarchical levels. For example, interactions among genes determine traits of individuals, competitive and cooperative interactions among individuals influence population dynamics, and interactions among species affect the dynamics of communities and ecosystem processes. Such systems can be represented as hierarchical networks, but can have complex dynamics when interdependencies among levels of the hierarchy occur. We propose integrating ecological and evolutionary processes in hierarchical networks to explore interdependencies in biological systems. We connect gene networks underlying predator–prey trait distributions to food webs. Our approach addresses longstanding questions about how complex traits and intraspecific trait variation affect the interdependencies among biological levels and the stability of meta-ecosystems.
See DOI
See Institutional Repository
Melián, C. J.; Matthews, B.; de Andreazzi, C. S.; Rodríguez, J. P.; Harmon, L. J.; Fortuna, M. A. (2018) Deciphering the interdependence between ecological and evolutionary networks, Trends in Ecology and Evolution, 33(7), 504-512, doi:10.1016/j.tree.2018.04.009, Institutional Repository

Diversification and biodiversity dynamics of hot and cold spots

The determinants that shape the distribution of diversity of life on Earth have been long discussed and many mechanisms underlying its formation have been proposed. Yet connecting the biogeography of hot and cold spots of diversiﬁcation and current biodiversity patterns to the microevolutionary processes remains largely unexplored. Here, we combine a landscape genetics model based on demographic stochasticity with a speciation model that can be interpreted as a model of the evolution of premating incompatibility or assortative mating to map diversiﬁcation rates in a spatial context. We show that landscape structure and the intensity and directionality of gene ﬂow strongly inﬂuence the formation of hot and cold spots and its connection to patterns in species richness. Speciﬁcally, hot and cold spots form in landscapes in which gene ﬂow is sufficiently strongly structured that the metacommunity nearly breaks up into several disconnected metacommunities. In such a landscape structure, speciation hot spots originate in the center or in the periphery of the landscape depending on whether the direction of gene ﬂow is from the periphery to the center or viceversa, respectively. However, for any given level of gene ﬂow intensity, diversiﬁcation rates are approximately twice higher in the center than in the periphery of the landscape. These results suggest that sinks may form diversiﬁcation hot spots with higher probability than sources, in particular, those sinks surrounded by highly diversiﬁed sources in different locations of the landscape. Joining mechanistically microevolutionary and macroevolutionary processes on landscapes present many fascinating challenges and opportunities to connect the biogeography of diversiﬁcation with biodiversity dynamics.
See DOI
See Institutional Repository
Melián, C. J.; Seehausen, O.; Eguíluz, V. M.; Fortuna, M. A.; Deiner, K. (2015) Diversification and biodiversity dynamics of hot and cold spots, Ecography, 38(4), 393-401, doi:10.1111/ecog.01162, Institutional Repository

Does sex speed up evolutionary rate and increase biodiversity?

Most empirical and theoretical studies have shown that sex increases the rate of evolution, although evidence of sex constraining genomic and epigenetic variation and slowing down evolution also exists. Faster rates with sex have been attributed to new gene combinations, removal of deleterious mutations, and adaptation to heterogeneous environments. Slower rates with sex have been attributed to removal of major genetic rearrangements, the cost of finding a mate, vulnerability to predation, and exposure to sexually transmitted diseases. Whether sex speeds or slows evolution, the connection between reproductive mode, the evolutionary rate, and species diversity remains largely unexplored. Here we present a spatially explicit model of ecological and evolutionary dynamics based on DNA sequence change to study the connection between mutation, speciation, and the resulting biodiversity in sexual and asexual populations. We show that faster speciation can decrease the abundance of newly formed species and thus decrease long-term biodiversity. In this way, sex can reduce diversity relative to asexual populations, because it leads to a higher rate of production of new species, but with lower abundances. Our results show that reproductive mode and the mechanisms underlying it can alter the link between mutation, evolutionary rate, speciation and biodiversity and we suggest that a high rate of evolution may not be required to yield high biodiversity.
See DOI
See Institutional Repository
Melián, C. J.; Alonso, D.; Allesina, S.; Condit, R. S.; Etienne, R. S. (2012) Does sex speed up evolutionary rate and increase biodiversity?, PLoS Computational Biology, 8(3), 1-9, doi:10.1371/journal.pcbi.1002414, Institutional Repository

Numerous evolutionary studies have sought to explain the distribution of diversity across the limbs of the tree of life. At the same time, ecological studies have sought to explain differences in diversity and relative abundance within and among ecological communities. Traditionally, these patterns have been considered separately, but models that consider processes operating at the level of individuals, such as neutral biodiversity theory (NBT), can provide a link between them. Here, we compare evolutionary dynamics across a suite of NBT models. We show that NBT can yield phylogenetic tree topologies with imbalance closely resembling empirical observations. In general, metacommunities that exhibit greater disparity in abundance are characterized by more imbalanced phylogenetic trees. However, NBT fails to capture the tempo of diversification as represented by the distribution of branching events through time. We suggest that population-level processes might therefore help explain the asymmetry of phylogenetic trees, but that tree shape might mislead estimates of evolutionary rates unless the diversification process is modeled explicitly.
See DOI
See Institutional Repository
Davies, T. J.; Allen, A. P.; Borda-de-Água, L.; Regetz, J.; Melián, C. J. (2011) Neutral biodiversity theory can explain the imbalance of phylogenetic trees but not the tempo of their diversification, Evolution, International Journal of Organic Evolution, 65(7), 1841-1850, doi:10.1111/j.1558-5646.2011.01265.x, Institutional Repository