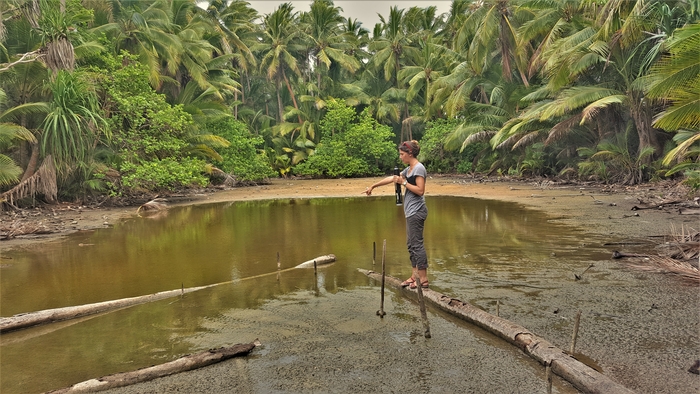 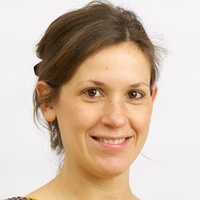 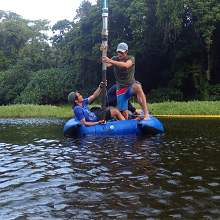 Hydrogen isotope ratios of sedimentary leaf waxes (δ2HWax values) are increasingly used to reconstruct past hydroclimate. Here, we add δ2HWax values from 19 lakes and four swamps on 15 tropical Pacific islands to an updated global compilation of published data from surface sediments and soils. Globally, there is a strong positive linear correlation between δ2H values of mean annual precipitation (δ2HP values) and the leaf waxes n‐C29‐alkane (R2 = 0.74, n = 665) and n‐C28‐acid (R2 = 0.74, n = 242). Tropical Pacific δ2HWax values fall within the predicted range of values based on the global calibration, and the largest residuals from the global regression line are no greater than those observed elsewhere, despite large uncertainties in δ2HP values at some Pacific sites. However, tropical Pacific δ2HWax values in isolation are not correlated with estimated δ2HP values from isoscapes or from isotope‐enabled general circulation models. Palynological analyses from these same Pacific sediment samples suggest no systematic relationship between any particular type of pollen distribution and deviations from the global calibration line. Rather, the poor correlations observed in the tropical Pacific are likely a function of the small range of δ2HP values relative to the typical residuals around the global calibration line. Our results suggest that δ2HWax values are currently most suitable for use in detecting large changes in precipitation in the tropical Pacific and elsewhere, but that ample room for improving this threshold exits in both improved understanding of δ2H variability in plants, as well as in precipitation.
See DOI
See Institutional Repository
Ladd, S. N.; Maloney, A. E.; Nelson, D. B.; Prebble, M.; Camperio, G.; Sear, D. A.; Hassall, J. D.; Langdon, P. G.; Sachs, J. P.; Dubois, N. (2021) Leaf wax hydrogen isotopes as a hydroclimate proxy in the tropical pacific, Journal of Geophysical Research G: Biogeosciences, 126(3), e2020JG005891 (21 pp.), doi:10.1029/2020JG005891, Institutional Repository

The Pacific Island ecosystems of Remote Oceania were dramatically transformed following the arrival of humans within the last ∼3000 years, as the new settlers required technological innovations and environmental modifications to maintain their populations. These modifications included the introduction of numerous exotic species, including the important crop Colocasia esculenta Schott (taro) and the development of infrastructure suitable for its cultivation. Archeological reconstruction of C. esculenta use in the Pacific has been challenging because of the low-specificity of fossil starch granules and its limited pollen production during periods of intense cultivation. Here, we assess a lipid biomarker approach to trace C. esculenta cultivation in the past. We characterized the neutral lipid compositions of leaf samples from common cultivars and widespread indigenous species from the archipelago of Vanuatu by gas chromatography–mass spectrometry (GC−MS). The compound palmitone (hentriacontan-16-one) was a major leaf wax constituent in C. esculenta cultivar samples (mean concentration of 402 ± 63 µg/g dry wt) and was only detected in one other species, the ornamental tree Cananga odorata (175 µg/g dry wt). The structure of palmitone is favorable for its long-term stability and we demonstrate its preservation potential in a 55 cm sedimentary record from Lake Vesalea on Espiritu Santo, Vanuatu, where C. esculenta is grown today. Palmitone concentrations in this core fluctuated up to 4.1 µg/g dry wt. Our results indicate that in appropriate environmental contexts, sedimentary palmitone concentrations could be used to reconstruct C. esculenta cultivation and to provide insights about past horticultural innovations in Remote Oceania.
See DOI
See Institutional Repository
Krentscher, C.; Dubois, N.; Camperio, G.; Prebble, M.; Ladd, S. N. (2019) Palmitone as a potential species-specific biomarker for the crop plant taro (Colocasia esculenta Schott) on remote Pacific islands, Organic Geochemistry, 132, 1-10, doi:10.1016/j.orggeochem.2019.03.006, Institutional Repository

The conservation of biodiverse areas around the world has contributed to the protection and recovery of endangered species. This has been the case for 11 species of Galapagos giant tortoises (Chelonoidis spp.) that today are successfully maintained over six islands: Española, Santiago, Pinzon, Isabela, San Cristobal and Santa Cruz. A favourable state of conservation will depend however on future development in the islands. In Santa Cruz Island the development of the agricultural areas has encroached on the migratory routes of the southwestern species C. porteri and may be an emergent conflict for tortoise conservation. We investigated the social and ecological inter-linkages using two methods framed under a participatory rural appraisal (PRA) approach: semi-structured interviews and questionnaires to study farmers' perceptions and attitudinal factors regarding giant tortoises; as well as the associated socio-economic impacts of the conflict. Moreover, we coupled the PRA approach with an ecological assessment of giant tortoises' population density by performing transect counts during the two yearly phases of giant tortoises' migration to the lowlands (January to June) and back to the highlands (July to December). Our results indicate that farmers reporting damage and cultivating crops have higher odds of taking actions (fencing and physical actions) towards giant tortoises; regardless of having (or not) a negative perception towards the species. The economic losses for crops and fences averaged 2.8 USD/m2 and 13USD/m, respectively, and provide an initial step to further analyse and characterise the direct and indirect damage costs. Finally, we estimated a density of 76 and 185 individuals of giant tortoises per km2 in the rural area for the lowland and highland migratory phases, respectively. Our approach provides grounded scientific social and ecological information to effectively inform and aid managers, policy and decision makers in the selection of adequate social and ecological criteria to implement the best available options in the resolution of this emergent conservation conflict.
See DOI
See Institutional Repository
Benitez-Capistros, F.; Camperio, G.; Hugé, J.; Dahdouh-Guebas, F.; Koedam, N. (2018) Emergent conservation conflicts in the Galapagos Islands: human-giant tortoise interactions in the rural area of Santa Cruz Island, PLoS One, 13(9), e0202268 (27 pp.), doi:10.1371/journal.pone.0202268, Institutional Repository