We focus both on processes in the aquatic environment as well as on entire systems of natural waters.

We perform basic and applied research and several projects have a problem-oriented and interdisciplinary focus, including system analysis. Read more 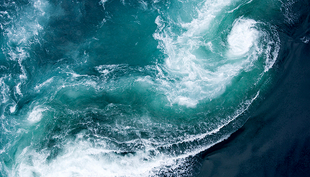 The chaotic behaviour of vortices is one of the things that makes weather forecasting so difficult. Researchers at ETH Zurich, Eawag and WSL, together with international partners, have now developed a novel experimental method...

The chaotic behaviour of vortices is one of the things that makes weather forecasting so difficult. Researchers at ETH Zurich, Eawag and WSL, together with international partners, have now developed a novel experimental method that enables more accurate analyses of the movement and energy of turbulence in fluids with much less effort.

Ehrenfels, B. (2021). Nitrogen cycling in Lake Tanganyika and its traces in the pelagic food web under contrasting hydrodynamic conditions (Doctoral dissertation). doi:10.3929/ethz-b-000492109, Institutional Repository
Background Lake Tanganyika is the longest (673 km) and second deepest (1,470 m) freshwater lake in the world. The lake is part of the East African Rift and its pelagic food web sustains the second largest inland fishery in Africa. The fish stocks are under dual pressure through heavy fishing and a long-term decline in biological productivity, caused by increasing water column stratification due to climate change. The productivity of the pelagic ecosystem depends on the internal nutrient cycling, which is governed by the limnological cycle: Lake Tanganyika is heavily stratified in the rainy season (October-April) with nutrient-depleted surface waters; in the dry season (May-September), southerly trade winds lead to an upwelling and convective mixing of nutrientrich water masses in the south basin, promoting high biological productivity, whereas the north and central basins maintain a weakened, but persistent stratification of the upper
water column. [...]
See DOI
See Institutional Repository
Boes, R., Burlando, P., Evers, F., Felix, D., Hohermuth, B., Schmid, M., … Manso, P. (2021). Swiss potential for hydropower generation and storage. Synthesis report. Retrieved from http://www.sccer-soe.ch/en/publications/synthesis-reports/, Institutional Repository
Hydropower (HP) is the backbone of the Swiss electricity system providing around 60% (36 TWh/a) of the total electricity generated on a yearly average. With the planned phase-out of nuclear power plants, HP and other Renewable Energy Sources (RES) will need to fill the substantial gap in domestic electricity generation, particularly in the winter season. Because of the intermittent nature of RES generation (mainly solar photovoltaics and wind) and their typically lower production in winter, the need for storage up to the seasonal time scale increases. Such large-scale storage is offered mainly by storage HP. However, maintaining the HP infrastructure will pose significant challenges, mainly due to market and legal conditions. For the latter, partly diverging interests according to the Swiss legislation will need to be fulfilled at the same time.
On the one hand, HP is supposed to be extended in the scope of the Energy Strategy (ES) 2050 and to keep climate goals by reducing greenhouse gas emissions. On the other hand, current negative effects of mainly older HP infrastructure on aquatic ecology will need to be remediated according to the Swiss Waters Protection Act to fulfill biodiversity goals. Meeting all these goals will require to systematically refurbish the existing Swiss HP fleet, to extend it in a smart way with prioritization on large storage HP to foster electricity generation in the critical winter season and to construct new HP schemes, again with a focus on electricity generation in winter.
As to new HP facilities, the retreating glaciers open new opportunities for high-altitude storage plants that, besides generating quasi CO2-free electricity, have also other benefits like protection from natural hazards and water supply for irrigation. Extending existing storage lakes by heightening of their dams is a complementary option to create additional storage with generally low environmental impact and possibly higher public acceptance. [...]
See Institutional Repository

Graduate Studies in our department

Video about Graduate Studies in our department

Wastewater is a source of antibiotic resistant bacteria. We study their dissemination in the aquatic environment, and strategies to remove them. 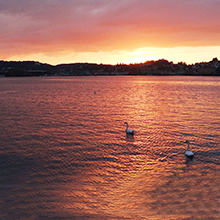 Lakes store large amounts of heat. To what extent can this heat be used to replace the use of fossil fuels or electricity for heating and cooling purposes?

Using lakes for heating and cooling 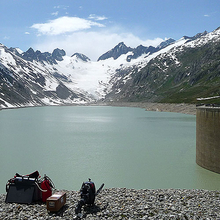 We assess the environmental impacts of hydropower plants to support a sustainable development of this energy resource.

Effects of hydropower on surface waters 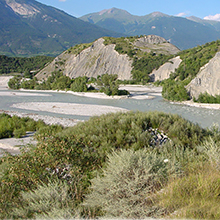 4’000 river kilometers will be rehabilitated in Switzerland over the course of the coming 80 years – a unique opportunity for learning!