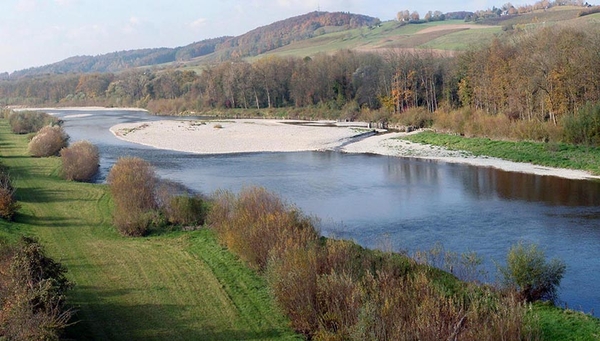 Abundant supplies of safe drinking water are among Switzerland’s most valuable natural resources, with groundwater accounting for 80% of the total. A third of this groundwater, in turn, is fed by infiltrating river water. Although contaminants and pathogens are filtered out as they pass through the soil, this natural protection system is not infallible. That makes it all the more important for river water to be kept as clean as possible, and for interactions between river and groundwater to be carefully observed.

At this year’s Eawag Info Day – held on Tuesday, 9 September in cooperation with the Swiss Gas and Water Industry Association – the latest findings of research on the topic of “Water supplies and bank filtration – a system under pressure?” are being presented to almost 300 scientists, water professionals, administration officials and policymakers.

Opening the event, Eawag Director Janet Hering said that Switzerland possesses the technical competence, financial resources and effective governance that are needed to manage its water resources sustainably. In its plans for river restoration and the control of micropollutant discharge from wastewater treatment plants, Switzerland “stands at the forefront of water protection worldwide”. Eawag, she added, was proud to contribute its expertise to these endeavours. At the same time, she pointed out that the high quality of Swiss water supplies often depends on the removal of contaminants and pathogens by soil filtration – and that the natural protection of groundwater is not infallible and cannot be taken for granted. Aquifer contamination, she warned, is nearly irreversible.

80% of Switzerland’s drinking water is sourced from groundwater, and a third of these aquifers are fed by infiltrating river water. As bank filtration is increasingly significant for drinking water production, it is important to be aware of any changes in river water quality. Recent studies by Eawag show that the impacts of human activities are observable in all surface waters. Between 100 and 160 different organic micropollutants – largely pharmaceuticals and food additives – were detected in effluents from wastewater treatment plants (see Figure). Summed up, the total concentration of these compounds is around 70–80 micrograms per litre. Even low concentrations represent substantial loads: in the Rhine, for example, over 42 tonnes of the artificial sweetener acesulfame is carried downstream from Basel per year, and about 13 tonnes of the antidiabetic drug metformin.

Impacts of climate change – and land use

Water is also affected by rising temperatures. For example, studies carried out during the 2003 summer heatwave showed that higher groundwater temperatures in some aquifers led to complete depletion of dissolved oxygen, with precipitation of dissolved iron and manganese being observed at certain pumping stations. If such conditions became more frequent, significant additional efforts would be required on the part of water suppliers, since pumped groundwater could no longer be supplied without further treatment. In addition, increased precipitation during the winter – as is predicted by climate models – may increase the leaching of nitrates and soil erosion on cultivated land, if agricultural practices remain unchanged. Experts agree, however, that for typical well catchments, land use or development has a greater influence on surface water quality than climate-related effects.

Undesirable, but not of toxicological concern

If groundwater is extracted from near-river wells, the question arises to what extent contaminants in bank filtrate are retarded or degraded as they pass through the subsurface. In an Eawag project on the Thur, almost 100 substances were detected both in river and in groundwater, although concentrations in groundwater were generally lower. Various pharmaceuticals are rapidly eliminated as they pass through the infiltration zone – in some cases even within the first few metres. During the winter, however, degradation is slowed or halted as a result of lower water temperatures. The low concentrations – in the nanogram (billionth of a gram) per litre range – at which certain persistent substances, e.g. contrast agents, occur in drinking water are not believed to be hazardous to human health. But according to environmental chemist Juliane Hollender, “Persistent synthetic compounds are, as a general rule, undesirable in natural waters and in drinking water.” She emphasizes, however, that the levels measured to date are well below the concentrations of contaminants typically found – and permitted – in food.

According to Urs von Gunten, Head of the Drinking Water Competence Centre at Eawag, the “river‑groundwater-drinking water” system in Switzerland benefits from a sound water protection strategy which is designed to minimize pollution of water resources and is based on a precautionary approach. Also required, in his view, are close observation and a detailed understanding of the underlying processes – e.g. in river restoration. In certain situations, additional treatment or even relocation of wells could become necessary. As Janet Hering noted, a “win-win” is not always possible in the event of competing water uses. Accordingly, Eawag seeks to support policymakers by providing a sound scientific basis for transparent decision-making.

They may be used free of charge only in connection with reports on the Info Day event and are not to be archived. Source to be cited: Eawag.

The processes of river water infiltration and groundwater exfiltration are influenced by high‑ and low-flow conditions (as pictured here on the Thur) and the widening of channelized rivers.

Installation of an observation well (piezometers) on a restored section of the Thur, using a Geoprobe direct-push system.

Heavy rain during the application period can cause pesticide runoff into surface waters.

Mean concentrations (left) and numbers of substances (right) in various groups of micropollutants detected in the outlets of eight Swiss wastewater treatment plants (unpublished data from an Eawag wastewater screening study supported by the Federal Office for the Environment).