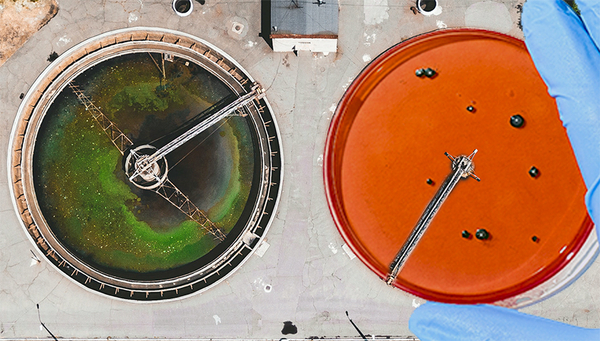 Wastewater treatment plants are ‘hotspots’ for antibiotic resistance genes and bacteria but sewer overflows exacerbate the problem by disseminating them into rivers. Researchers at Eawag suggest ways to minimise these effects.

Antibiotic resistance is an emerging threat to public health, and now a leading cause of death worldwide, killing close to five million people in 2019. Due partly to the overuse and abuse of antibiotics since their commercialisation in the early 20th century, the scale of the problem has continued to grow. Wastewater has been recognised as one of the most important routes by which bacteria and genes resistant to antibiotics are released into the environment.

Even after processing in a wastewater treatment plant, non-disinfected wastewaters contain orders of magnitude more antibiotic-resistant bacteria and antibiotic resistance genes than is naturally found in rivers and lakes. Raw sewage contains yet again much higher levels, and thus discharge of untreated sewage can be expected to contaminate the environment even more severely. One way this can happen, even in countries with otherwise excellent sanitation infrastructure, is when heavy rain leads to sewage volumes that exceed the capacities of sewer systems or wastewater treatment plants. A mixture of excess rainwater and sewage is then discharged into receiving water bodies, bypassing conventional treatment processes.

Our Microbial Ecology research group at Eawag investigates community-level microbial processes in natural and engineered systems, including environmental antibiotic resistance. Recently we published a paper in Water Research, which details our investigation into antibiotic resistance contamination during stormwater events in the river Murg near Münchwilen in Switzerland.

We wanted to document and quantify the extent of such contamination during heavy rainfall. This is challenging, because such events are relatively rare, and you have to be on site when they happen. For instance, even though these events occurred in Münchwilen on 118 calendar days in 2019, most did not last long. During heavy rains, many other potential sources of antibiotic resistance contamination enter the river, complicating our research further. This includes surface runoff that transports soil into the river, such as from fields and meadows that may have been manured. Sediment within the river is also resuspended by the faster flow.

Using modern sequencing techniques to distinguish microbes from different sources, we disentangled these inputs. Our results show that the sewage overflow, so-called ‘wastewater bypass’, was clearly the major source of antibiotic resistance in the river. In many wastewater plants, including the one in Münchwilen, the bypass at least undergoes a sedimentation process before it is discharged to the river. However, post-sedimentation levels of antibiotic resistance were still very high.

Deploying an auto-sampler at the wastewater receiving river during stormwater events.
(Source: Eawag)

We were surprised that the increased levels of antibiotic resistance genes in the river persisted for quite a while (for 22 hours) even after the storm had moved on. While there are no other wastewater treatment plants along the river, there are many discharge points upstream where combined sewer overflows can contaminate the river. This implies that antibiotic resistance contamination entered the river at various points and the upstream inputs kept being transported to our sampling points.

How much is wastewater bypass contributing to antibiotic resistance contamination in Swiss rivers? According to a different Eawag project - ‘Diffuse micropollutant emissions from urban areas (DIMES)’ performed by Dr Christoph Ort and Dr Max Maurer - combined sewer overflows comprise approximately four percent of the total wastewater discharges in Switzerland (see articles in  Water Research and Aqua & Gas). At a glance, this proportion looks small. However, bypass contains two to three orders of magnitude higher levels of antibiotic resistance than treated wastewater. The actual contribution made by bypass and sewage overflows might therefore be comparable to that of treated effluents over the whole year.

What can we do to reduce this impact? In our Water Research paper, we suggest increasing retention capacities of wastewater treatment plants and retention basins as an option. Reducing the amount of untreated sewage that is released should be a main goal when renovating or building new sanitation infrastructure. Other measures  include better separation of rain and wastewater and improved infiltration capacity in the catchment to reduce the amount of rainwater entering the sewers.

Our future research aims to integrate the spatial and temporal dynamics of antibiotic resistance genes in receiving rivers during stormwater events into hydrological models. By doing this, we will be able to predict ‘where’ and ‘when’ exactly antibiotic resistance genes are present in waterways. As climate change is expected to lead on the one hand to longer periods of low flow (when treated effluent discharge will be less diluted) and more and stronger storms (leading to more frequent and larger sewer overflow events), such tools will be important to safeguard water quality in the future.

This study was financially supported by the Swiss National Science Foundation under the National research Programme NRP72 “Antimicrobial resistance” Grant No. 407240_167116.

The article was originally published by Water Science Policy.