«The power of the small» am Global Science Filmfestival uraufgeführt 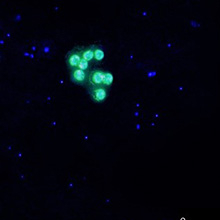 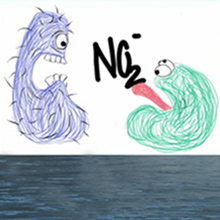 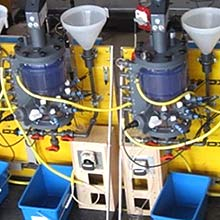 Lake Kivu (Rwanda / R. o. t. Kongo) is a large Lake in central Africa distinguished by an enormous accumulation of dissolved CO2 and methane in its Hypolimnion. We studied and modeled the processes of methane cycling and the distributions of potential methanotrophs populations in the Lake.

Unique worldwide, Lake Kivu stores enormous amounts of CH4 and CO2. A recent study reported that CH4 concentrations in the lake have increased by up to 15% in the last 30 years and that accumulation at this rate could lead to catastrophic outgassing by ∼2100. This study investigates the present-day CH4 formation and oxidation in Lake Kivu. Analyses of 14C and 13C in CH4 and potential carbon sources revealed that below 260 m, an unusually high ∼65% of the CH4 originates either from reduction of geogenic CO2 with mostly geogenic H2 or from direct inflows of geogenic CH4. Aerobic CH4 oxidation, performed by close relatives of type X CH4-oxidizing bacteria, is the main process preventing CH4 from escaping to the atmosphere. Anaerobic CH4 oxidation, carried out by CH4-oxidizing archaea in the SO42−-reducing zone, was also detected but is limited by the availability of sulfate. Changes in 14CCH4 and 13CCH4 since the 1970s suggest that the amount of CH4 produced from degrading organic material has increased due to higher accumulation of organic matter. This, as well as the sudden onset of carbonates in the 1960s, has previously been explained by three environmental changes: (1) introduction of nonnative fish, (2) amplified subaquatic inflows following hydrological changes, and (3) increased external inputs due to the fast growing population. The resulting enhancement of primary production and organic matter sedimentation likely caused CH4 to increase. However, given the large proportion of old CH4 carbon, we cannot exclude an increased inflow of geogenic H2 or CH4.
See DOI
See Institutional Repository
Pasche, N.; Schmid, M.; Vazquez, F.; Schubert, C. J.; Wüest, A.; Kessler, J. D.; Pack, M. A.; Reeburgh, W. S.; Bürgmann, H. (2011) Methane sources and sinks in Lake Kivu, Journal of Geophysical Research G: Biogeosciences, 116(G3), G03006 (16 pp.), doi:10.1029/2011JG001690, Institutional Repository

Meromictic Lake Kivu is renowned for its enormous quantity of methane dissolved in the hypolimnion. The methane is primarily of biological origin, and its concentration has been increasing in the past half-century. Insight into the origin of methane production in Lake Kivu has become relevant with the recent commercial extraction of methane from the hypolimnion. This study provides the first culture-independent approach to identifying the archaeal communities present in Lake Kivu sediments at the sediment-water interface. Terminal restriction fragment length polymorphism analysis suggests considerable heterogeneity in the archaeal community composition at varying sample locations. This diversity reflects changes in the geochemical conditions in the sediment and the overlying water, which are an effect of local groundwater inflows. A more in-depth look at the archaeal community composition by clone library analysis revealed diverse phylogenies of Euryarchaeota and Crenarachaeota. Many of the sequences in the clone libraries belonged to globally distributed archaeal clades such as the rice cluster V and Lake Dagow sediment environmental clusters. Several of the determined clades were previously thought to be rare among freshwater sediment Archaea (e.g., sequences related to the SAGMEG-1 clade). Surprisingly, there was no observed relation of clones to known hydrogentrophic methanogens and less than 2 % of clones were related to acetoclastic methanogens. The local variability, diversity, and novelty of the archaeal community structure in Lake Kivu should be considered when making assumptions on the biogeochemical functioning of its sediments.
See DOI
See Institutional Repository
Bhattarai, S.; Ross, K. A.; Schmid, M.; Anselmetti, F. S.; Bürgmann, H. (2012) Local conditions structure unique archaeal communities in the anoxic sediments of meromictic Lake Kivu, Microbial Ecology, 64(2), 291-310, doi:10.1007/s00248-012-0034-x, Institutional Repository